Music Mix is a free Windows 8 music player to play two different songs at once. The app has two different media players to play songs. Add the songs that you want to play in are the built-in Playlist section of the app. Obviously, you need to add at least two songs in the playlist to play them simultaneously.  Then sort the songs as per your preference. You can sort the songs as per their Name, Genre, Year, Title, and Duration.

Choose the songs that you want to play for each player. You can either select songs by drag and drop or can use insert button. And then click on Play button of each player to play the songs. You can hear both the media player playing different songs simultaneously. You can even control the volume of each player. It will help you to hear any one song louder than another one. 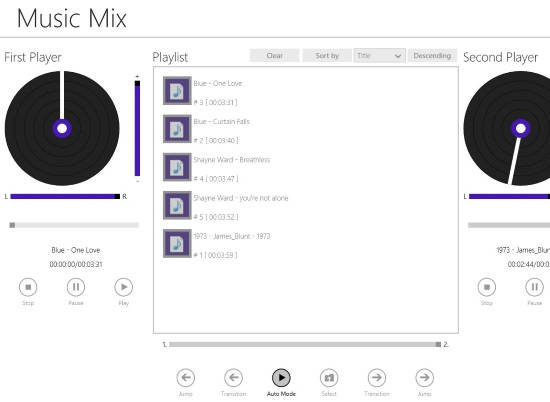 The app even lets you perform auto transition. Clicking on auto mode will automatically create transition between the players. In auto transition, when a song in a particular player is about to finish, it will become a bit softer and another player will start playing another song before your first song ends. You can even jump to any player in the middle of song as well.

Playing Two Songs At Once With This Music Player For Windows 8:

You can get Music Mix app free From Windows Store by using the link given at the end of this review.

After launching the app, you will find two players, simply named as: First Player and Second Player. Between the two players, you will find a Playlist Column. One thing I find missing in this app is that, it doesn’t automatically syncs songs from Music folder of your Windows 8 PC (if you find it a big flaw, then you can use another media player for Windows 8). You need to manually add them. 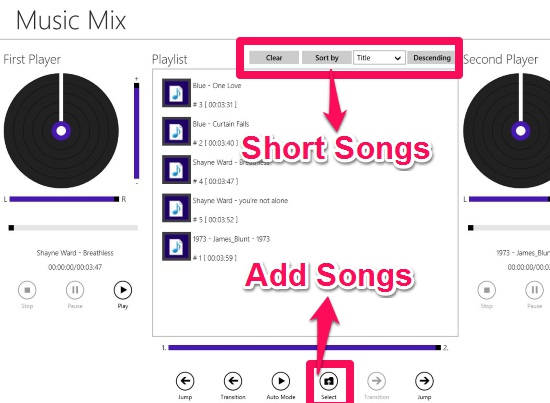 Now, drag and drop the various songs from playlist to players. To play both the players simultaneously, click on the “Play” button available with each player. Both the players will start playing individual songs. You can control the volume of individual player by using the volume scroll available with each player. However if you want to control the volume of both players using single controller, use the scroll given below the Playlist section. If the scroll is pointed in centre, then both the songs are played with same frequency. However, if you scroll it towards left, the song playing in first media player becomes louder and when moved to right the second song becomes louder. 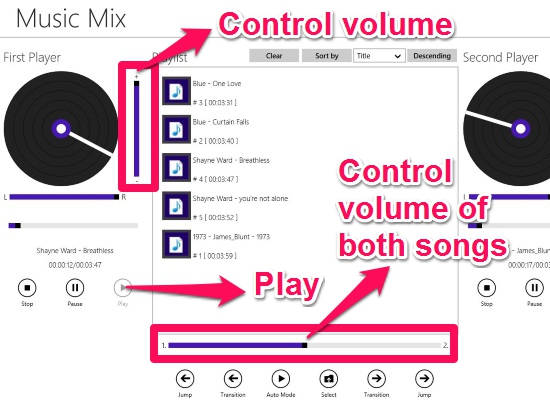 You can even switch to any one player by clicking on the Jump button. 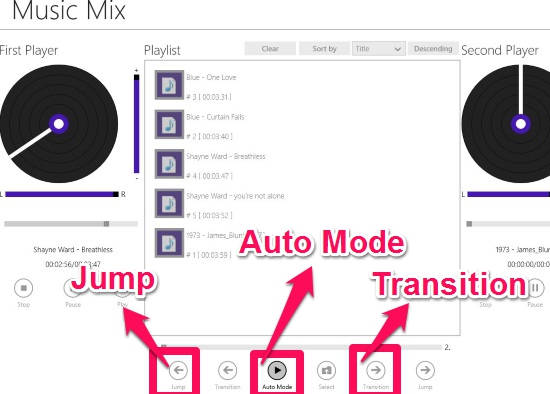 Music Mix is a very elegant music player app for Windows 8. The app mainly focusses on playing two songs at once and performing transition between different songs. Other than these two, I didn’t find any special feature in this app. The best thing of this app is that, it has two built-in players and both are independent of each other. You can use this app for any evening party or for yourself.