FSS Video Converter is, like the name of this free software suggests it, a free batch video conversion utility. It comes with presets for conversing common video formats next to which there are dozens of different device and web format presets for you to choose. With this free video converter you can convert multiple videos at once.

Screenshot above show us the interface of FSS Video Converter. All the way to the top left corner there are three tabs which you can use for switching between presets, like we said, common formats, devices, and the web. Below that, buttons are available for quickly selecting the format that you want to use during video conversion. Empty area in the middle of the window is where videos that you decide to convert are gonna be listed. At the bottom you can select the output directory, and also manually adjust both audio and video codec settings. On the right buttons for adding and removing videos to the list can be seen, and last but not least we have the Convert button.

There are always videos which have to be converted. It’s either mobile phone camera recording that needs to be converted so it can be played on DVD player, or the other way around, online video which you would like to watch on your mobile device. Large selection of formats means that you can convert for pretty much every situation. Let’s see how this free batch video conversion software works.

How to Convert Video For Free with FSS Video Converter?

You start by either adding the videos that you want to convert to the job list or by configuring the conversion settings. Use the three tabs all the way at the top to switch between format, device, and web presets. 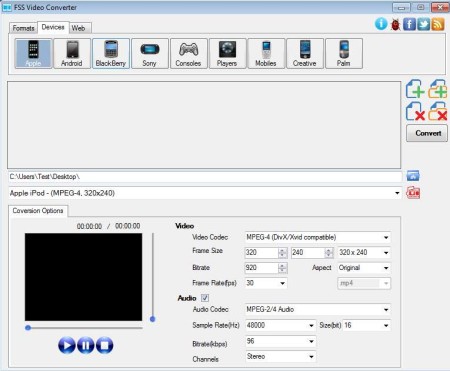 Plus buttons on the right are used to either open files individually, the first button, or to import entire folders to the list, the second button. Down below you can open up the settings editing by clicking on the red button, underneath the folder, which is used to set the output directory. Once you’ve gone over all the video and audio codec settings, click convert and conversion should start.

FSS Video Converter offers a lot of useful features, and even though you might think that because of that it’s complicated to use, but it’s not. Everything can be setup easily and conversion is very fast. Presets will help those who aren’t sure what they need to select when they want to convert videos for their devices. Give it a try and see how it goes. Free download.