Here is the list of 5 free Morse Code Translators that lets you effortlessly convert text to Morse Code. Some of these even let you convert Morse Code to text. All these Morse Code translators are online, and completely free. They do not need any registration. Just enter the text for which you want to find the Morse Code, and then will instantly show the converted Morse Code to you.

Some of the websites provide additional feature to let you hear the Morse Code, as well as create an audio file of Morse Code. This will be useful if you are trying to Practice Morse Code. 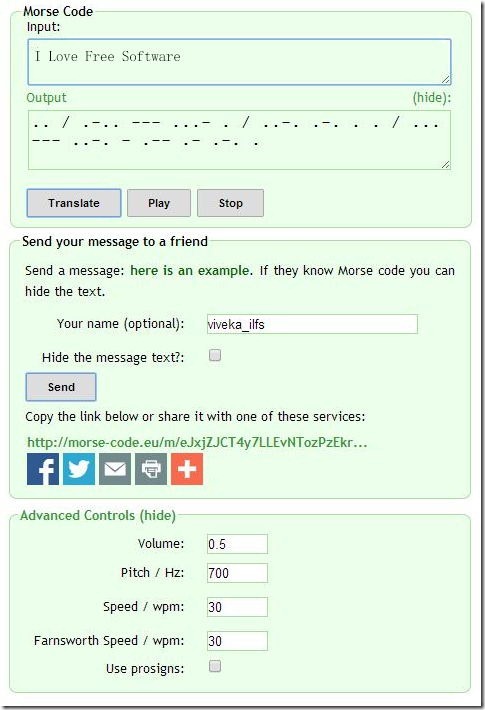 SCPhillips is the website that offers you online Morse Code translator to easily translate letters, numbers, or punctuation into Morse Codes. All you have to do is type the desired word, phrase, or number, and click on the Translate button. It’ll quickly convert text into Morse Code, that you can see in the output box. In place of space, it adds slash ”/”. Apart from translating, it lets you play the Morse Code, so that you can hear the converted Morse Code.

The best part of this website is that, it has the ability to generate a URL to this Morse Code which you can share via email, or any social networking sites, like: Facebook, Twitter, etc. You can also hide the message text, if required. This is actually a nice way to send a secret message.

In addition to all theses features, it offers you various advanced controls, that you can use to adjust Volume, Pitch, Speed/wpm, etc. 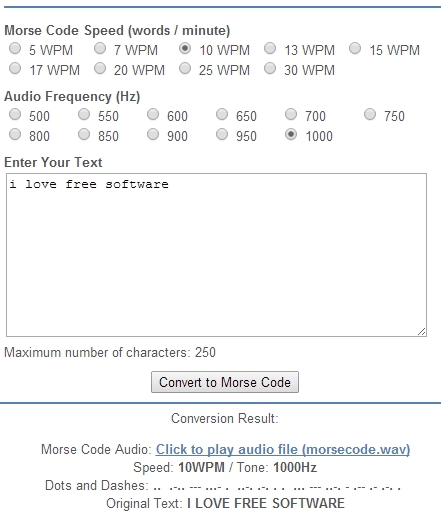 Meridian Outpost is another website that provides you text to Morse Code translator, along with some additional features. The best part of this website is that, it has the ability to generate audio file of the Morse code in WAV format, which you can listen to, or save to your PC.

It also provides you some options, which you can use to customize the Morse Code Speed (wpm) and Audio frequency,  from the provided pre-options.

The only limitation of this website is that it limits it lets you type only up to 250 characters maximum.

All you have to do is, enter your text in the box, and after adjusting the wpm, and audio frequency, you can click on the “Convert to Morse Code” button. It quickly generates the Morse Code along with the audio file of WAV format. It also displays your original text for which your Morse Code is being generated. 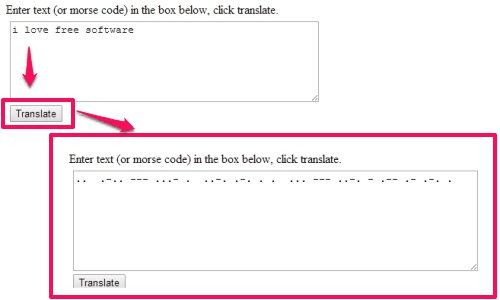 Mattfedder is another online Morse Code Translator that comes with simple interface, so that you can simply enter your text to convert it to Morse Code. All you have to do is, type the desired text into the box and click “Translate” button, to quickly translate text into Morse Code.

As it separates each Morse Code with space, so it is recommended to use two spaces, to separate words. 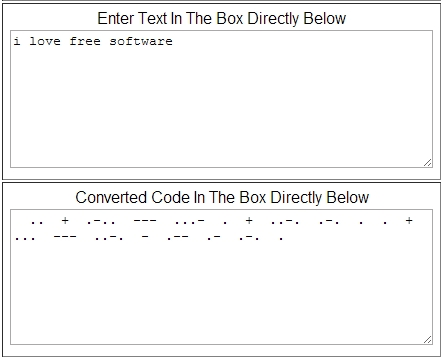 Apart from translating text to Morse Code, it offers you Morse Code to Text Translator as well.

Lexilogos is another website that provide you translation from both Text to Morse Code, as well as Morse Code to text, in real time. It provides you a block for text, and another for Morse Code.

In addition, it provides you “Dit”,  “Dat”, and “space bar” of Morse Code, which you can use to write Morse Code directly in the right block. While typing Morse codes, you can see the text on the left side.

Not only that, you can copy or clear the block in one click.

If you want to send Morse Code to anyone, then you can use these websites to translate text to Morse Code. All these Morse Code translators are really easy to use. I hope you enjoy using them.