Update 2022: FMList no longer exists. We recommend you to try some other to do list manager instead.

To-Do lists have long been one of the simplest yet most effective ways of managing things that need to be done, and that’s still the case. The only difference is that the paper and pen to-do lists have been largely replaced by their digital variants. That being said, there are tons of to-do list applications and services out there, and most of them offer a whole bunch of impressive, productivity enhancing features.

But we’re not here to talk about them. Instead, the focus of this write-up is FMList, an online to-do list that’s specifically built, in its own words, to make your workload even more annoying. And to do that, it uses something called “tab anxiety.” Confused? Read past the jump, you’re going to love this folks.

FMList: What It Is, And How It Works?

If you’ve read this far, you already know the what part. FMList is an online to-do list service. The how is the interesting deal. FMList uses tab anxiety to annoy the heck out of you. Basically, whenever you add a new item to FMList, it creates an additional tab in your browser. So the number of open tabs in your browser increase as you keep on adding items to FMList, thus adding to your tab anxiety. And whenever you check off (or click) a completed item in its own tab, the tab is closed. Absurd? Maybe. Truckloads of fun? Definitely. Here’s a stepwise tutorial, illustrating how to get started with FMList.

Step 1: FMList’s ease of use is as ridiculous as its whole concept. There are no sign-ups, accounts, cloud synchronization, or anything of that sort. Everything is done on the service’s super minimal homepage. To add an item to FMList, type in the task name at the blinking cursor, and hit the “+” button. 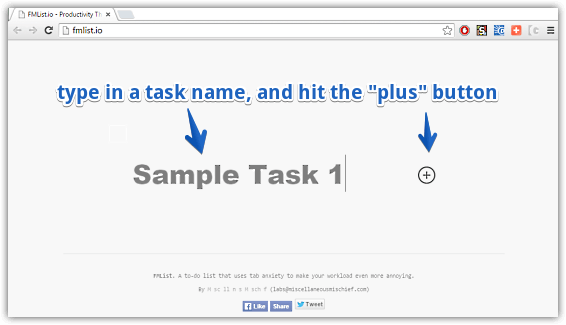 Step 2: As soon as you do that, a new tab will be created, having the task name, as well as a checkmark. To add another task, type its name at the blinking cursor, and watch the same process get repeated in yet another tab. Here’s how an added task looks like in its own tab. Once you’ve completed it, simply click the checkmark, and the tab will be closed. Take a look at the screenshot below: 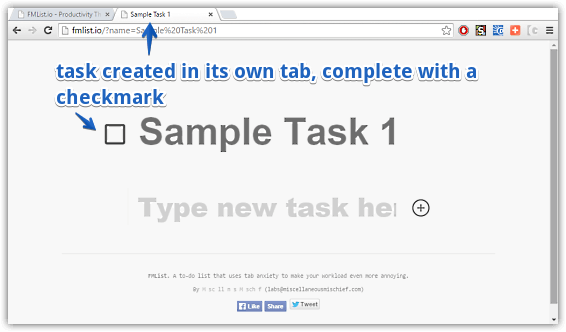 That’s really all there’s to it. This is tons of fun, even if it doesn’t make sense!

FMList is an insanely fun online to-do list service. It’s kinda pointless, and it sure as heck won’t make you a productivity ninja. But the thing is, it’s not intended to. Give it a shot, and let the tab anxiety take you over.