This tutorial explains how to translate text to multiple languages together.

Although we can easily translate a text to a different language using the popular Google Translate service, but it can’t help us when we need to translate a text to 2 or more languages in a single go. To make this task possible, here is a free website, called Tranlatr.

This free text translator website lets you enter a line or paragraph and select languages to generate the output. The website actually uses Google Translate API, but handy when we need to translate a word or sentence to multiple other languages. You can translate text written in English or in any other language to French, Spanish, Russian, Swedish, Polish, Japanese, etc. 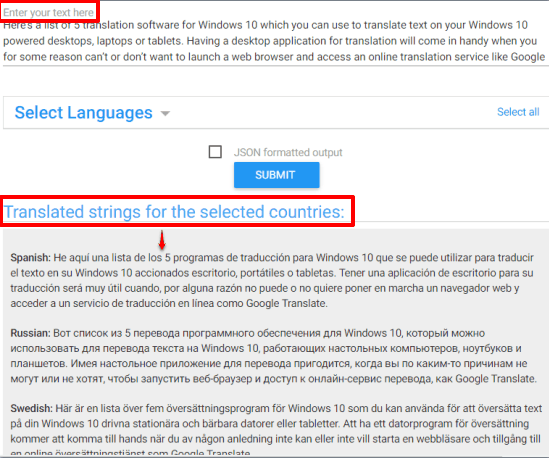 It works very well when you are translating text from English to Russian, Swedish, Spanish, Bengali, etc. However, for some languages, like Esperanto, Hindi, etc., it won’t give accurate results. During my testing, it gives good results most of the times. However, you shouldn’t rely on this service completely. It is good to perform small tasks.

We have also reviewed 5 language translation extensions for Google Chrome.

How To Translate Text To Multiple Languages Together?

This is a very simple text translator service. You first need to access its homepage. After this, follow three simple steps:

Step 1: Enter the text in the available space. You can write a few words or a paragraph.

Step 2: Select the languages in which you want to generate the output. The list of all supported languages is visible on its interface. You just need to select languages of your choice. 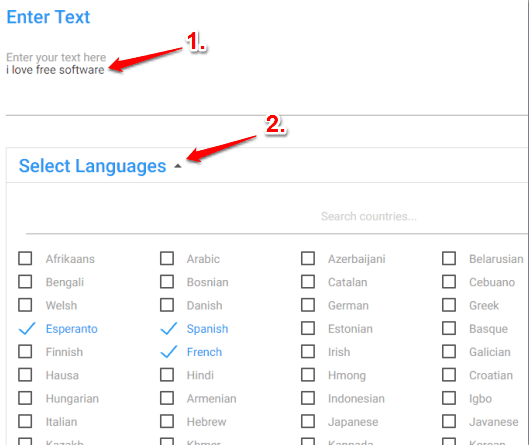 Step 3: This is the last step to generate the output. Before translating the text, you can also enable option to generate JSON formatted output. That’s it! Press SUBMIT button and it will generate output shortly. 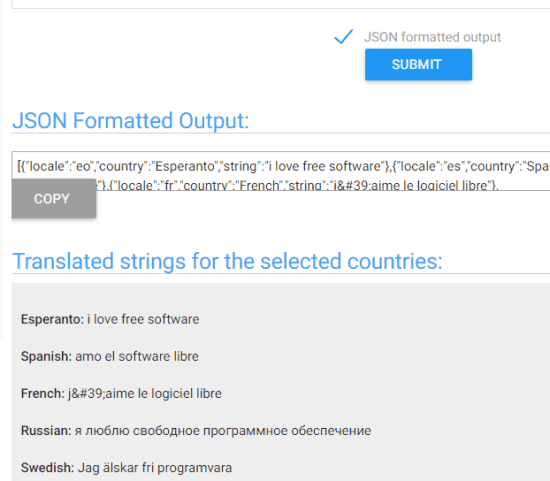 You can select output text, copy it, and then paste to any place you want.

This free text translator service is good enough for personal purpose when you want to convert a simple text into multiple languages at once. However, it won’t be a good idea to use it related to professional work, as output data might not be as accurate as it should be.