By Mohammad Suleman on May 16, 2019 Tutorial
Editor Ratings:
User Ratings:

This tutorial explains how to get free unlimited storage in Google Drive. UDS is a command line tool which allows you to upload files in Google Drive by saving its contents in Docs. Since, storage of Docs isn’t included in the free tier storage of Drive, so you can keep unlimited files there. All you have to do is just convert the file to Base64 and save the entire string inside a Doc file. And that is what this tool, UDS here does. After authorizing your Google account, it can upload files to Drive, download them, and even delete them. The best part is that you will get to store any number of files that you want.

Google Drive by default offers you 15GB storage in free tier. For some people, it is more than enough but for some some it isn’t. Which is why people often look for ways to increase their quota. The developer of UDS did some digging and found out that a Google Doc takes 0 bytes of quota in Drive. And a Doc can store a million character at a time. So, you can store a binary file in a Doc and by converting the file to Base64 encoding. And it splits the file in to many Google Doc files based on its size.

This tool, UDS after authorizing your account lets you upload files directly there. And there some parameters that it uses for various operations. It supports list, upload, download, erase, delete like options that you can execute from command line. It uses a unique ID to identify the file in cloud and does the corresponding operation. However, there is one downside in the whole process. The download and upload speed is kind of low at this moment. But I think in the later updates, maybe the contributors will come up with an idea to fix this. 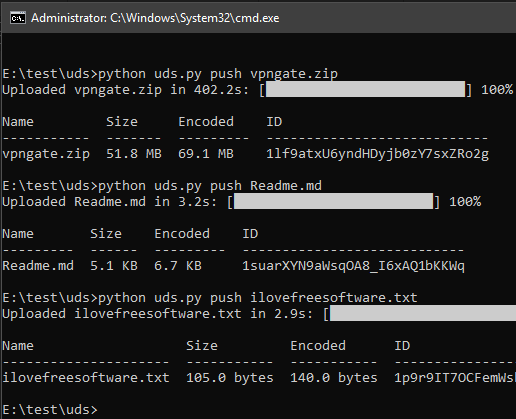 How to Get Free Unlimited Storage in Google Drive?

UDS is free and open source tool with CLI and needs Python to work. If you have used some command line tools in the past then it will be very easy to use it. To start using it, you can grab its GitHub repository from here. Next, you extract the folder and open terminal or command prompt theater to install the dependencies. You have to run the following command there. 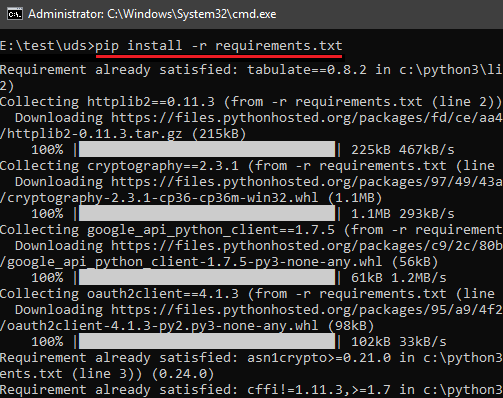 Now, next step is to authorize your Google Drive. For that, you will have to enable the Drive API first. Go to this link and the enable the API. It will ask you to specify a project name and after a few seconds, it will show you the credentials. Next, you can download the credentials on your PC (in a JSON file). You have to place the downloaded file in the same folder where “uds.py” file is. 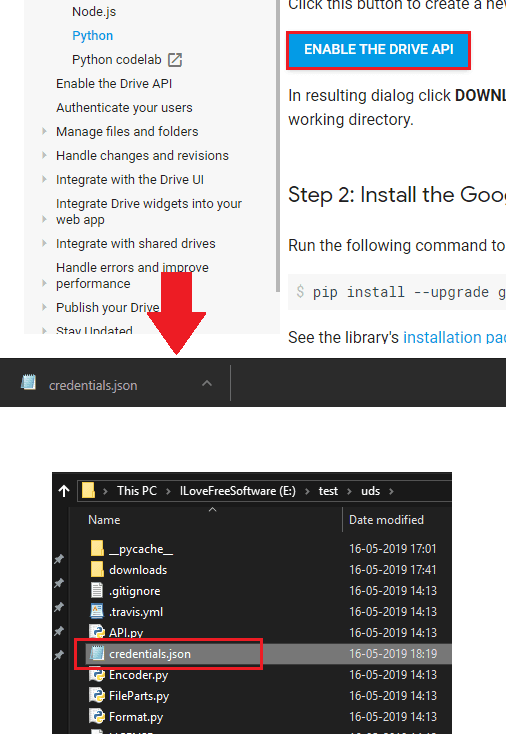 Now, it’s time to start using the tool. First run the “python uds.py” command for initial setup. After you can start uploading the files. To upload a file, I will suggest you to keep the input file in the same folder in which “uds.py” is. There are 4 major operations that you can do and their syntax is given below.

You can see the output of each command in the corresponding screenshots. This way, you can manage the Google Drive files from command line. All these files will be converter to Base64 string which will be added in the Google Doc file. And depending on the size of the input file, it will split the Doc file accordingly since, a Doc file can only contain 710KB of Base64 characters.

This is a clever hack in order to get most out of your Google Drive. If you want to try your hands on this tool then you are free to do that. All you need is python and if you are aware how Python works then you will easily be able to use it. Currently, it works perfectly and in future maybe there will be more features. And the download/upload speed problem will probably be fixed.