This tutorial explains how to control iPhone music player with gestures. After following this tutorial, you will be able to do common functions like pause / play songs, move to next song, etc. just using gestures, without even touching the phone screen. In fact, you can just shake your phone to move to next song! 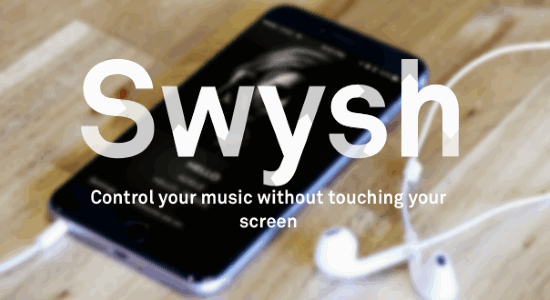 Note: The free version of Swysh offers limited gestures, which you can overcome with a single in-app purchase.

How to Control iPhone Music Player with Gestures:

Step 1: First, open up the app “Swysh” on your iPhone and go through the simple interactive tutorial to know about the gestures. After that, a simple screen will appear with a message “Open Your Music Player to Play Music” along with a “Settings” option at the top-left corner. Actually, when you open up the app, the gesture control will get automatically activated. 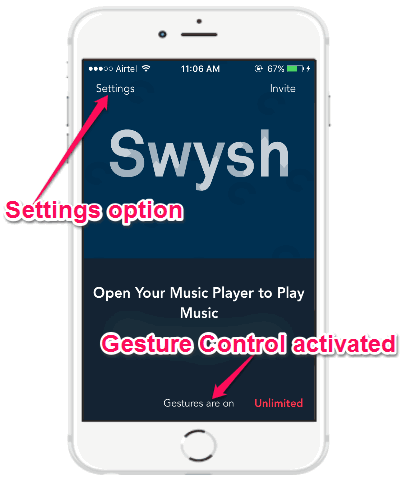 Step 2: Now, tap on the “Settings” option and you will see two different settings sections named, Features and Sensitivity. On the “Features” section, you’ll be able to enable or disable the following options: Gestures, Shuffle Songs, Pocket Mode, and Disable Gestures When Walking. On the “Sensitivity” section you’ll be able to choose the gesture sensitivity either as Soft, Middle, or Hard. 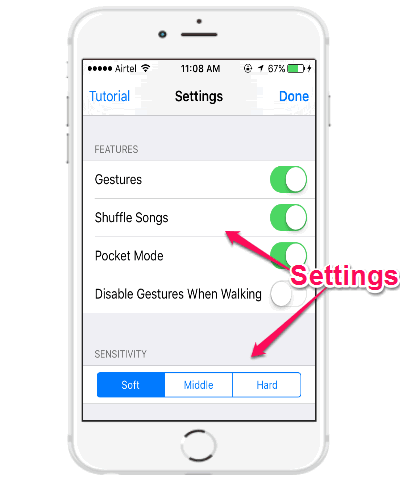 Let me explain what happens when you enable or disable the options on the “Features” section.

Step 3: Once you’re done configuring all the settings, simply minimize this app and open up your music player. After that, you can start listening to songs and control the playback with gestures. You can wave your phone to the left to play the previous song, wave to the right to play the next song, and wave downwards to play or pause the current song. Remember, if you’ve enabled the “Shuffle Songs” option, then the “Next” song gesture will randomly play songs and not the exact next song. 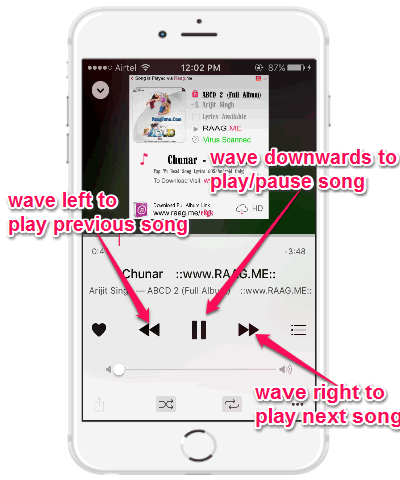 Get “Swysh” from here.