There are dozens of VPN apps available for iPhone in the App Store. So, I have tested a bunch of these apps and make a list of 10 best free VPN apps for iPhone which I want to share with you. Using these free VPN apps for your iPhone, you can connect to a VPN server of various locations like the United States, United Kingdom, Canada, Singapore, Switzerland, Netherlands, and more.

These apps assist you in accessing restricted or blocked domains, secure your network connectivity, make your online presence anonymous, block intrusive trackers from following you around the web, prevent your online data from Internet threats, etc.

Let’s get started with the list of VPN apps. 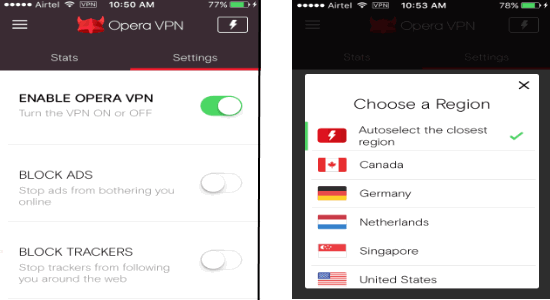 The first VPN app in my list is the Opera VPN. It is definitely one of the best VPN app for iPhone. This app allows you to connect to servers of 5 different locations like the United States, Canada, Singapore, Germany, and Netherlands. Doing so, you can browse region-based restricted websites, protect your privacy, network connection, and other online data. For this, all you have to do is select a location and enable the VPN button, that’s all.

Apart from that, it lets you block trackers by masking your IP address such that the trackers won’t be able to observe or track your online activities. Another useful feature of this app is that it helps you block annoying ads while browsing the web in Safari, Chrome, etc. But, the best part of Opera VPN is that it offers unlimited traffic for free, which is a pretty rare feature among free VPN apps for iPhone.

Want to know more about Opera VPN, then go on and read the full review here. 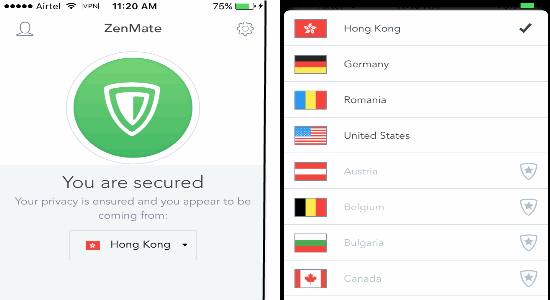 Zenmate is another useful VPN app for iPhone to browse blocked websites, mask your IP address & location, and to keep your online work anonymous. There is no limit on the amount of traffic. It supports 4 different server locations: United States, HongKong, Romania, and Germany in the free version. However, with a single in-app purchase you can get access to more locations like Canada, Austria, Belgium, Finland, France, Italy, and more.

Once, you’re connected to a VPN server it automatically secures all your browser traffic and IP details with encryption. It also shields your online identity and privacy from various Internet threats. Whether you’re using a public Wifi network or cellular data, Zenmate always makes your Internet connection secure after connecting to a VPN server.

If you would like to know more about Zenmate, then you can read our post on Free iPhone VPN App: Zenmate. 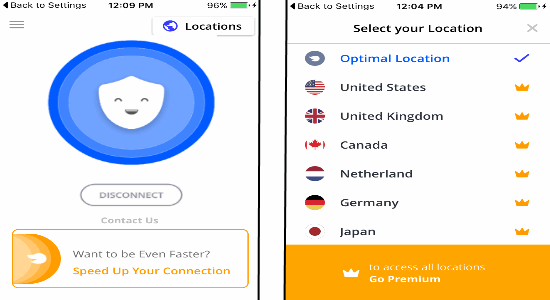 Betternet is also a great VPN app for iPhone which provides unlimited traffic for zero cost. However, it doesn’t allow you to select locations (like United States, UK, Canada, etc.) manually in the free version. By default, it enables the “Optimal Location” option which automatically connects you to a nearest or most favorable VPN server for faster service. Do not worry, the “Optimal Location” works fine, but it might take a minute or two for connecting to a VPN server.

When you’re connected via Betternet, you can surf almost all the restricted websites across the world. It allows you to access the Internet without worrying about your privacy or web data, as it changes your IP address to hide you from trackers, ISP, and more. No matter whether you are using mobile data, unsecured Wifi hotspots, or any other public networks, it always secures your Internet connectivity.

Check out the full review of Betternet from here. 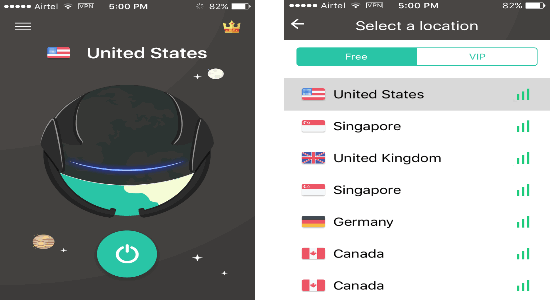 VPN Master is a free VPN app for iPhone to unblock access to censored sites, secure your Wifi connections, and protect your Internet privacy. It lets you connect to dozens of free VPN servers from locations like Canada, United States, Singapore, Germany, UK, Holand, and more. However, if you want to access VIP servers for faster browsing, then you can purchase the VIP packs of VPN Master. Upgrading to the VIP packs also allows you to remove annoying ads.

So, start using this app to access all your favorites apps and websites without any censorship or restrictions. VPN Master catches more attention because there is no limit for session time and bandwidth data. That means you can use this app for unlimited VPN traffic. It automatically secures your connection (Wifi, 3G, LTE, etc) and makes you anonymous from the spying eyes of hackers, trackers, and other web threats. 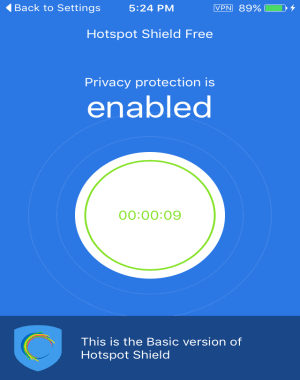 If you’re looking for a VPN app which lets you access restricted or censored domains at a glance, then Hotspot Shield is here for you. This app lets you access unlimited VPN which means there is no limit for browsing traffic or bandwidth. Unlike other apps, it doesn’t have the option of choosing a server location manually. That means when you connect to a VPN, it automatically scans your nearest servers and makes a connection with the one which it thinks works best.

It helps you explore blocked apps & sites, keeps your web activities secure & private, and also protects you from Internet snoopers over a Wifi network. For connecting to a VPN server, all you have to do is click the big round button at the center of the screen, that’s all. 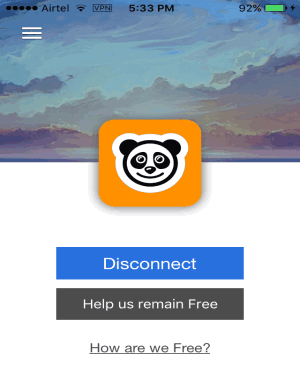 FreeVPN is another useful VPN app powered by FreeVPN.org. You can get started by simply installing this app and a VPN profile. It is completely free and provides unlimited free browsing over VPN. The catch is that it automatically finds the fastest and nearest server for you and doesn’t have any feature to select locations manually.

The user interface is super simple and you can connect to a virtual private network in no time. It encrypts all online data and keeps your web privacy safe by redirecting all your traffic to its own VPN server. Your IP details are also masked so that the trackers, ISPs, and hackers will not be able to get access to your personal information.

You may also like Free Avira VPN Software for Windows: Phantom VPN. 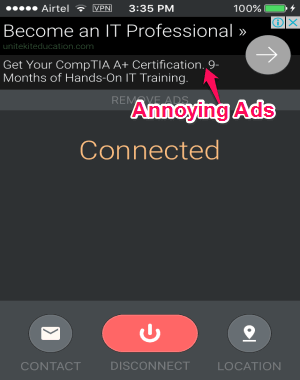 Similar to Hotspot Shield, VPN HexaTech is a simple app which connects you to a VPN network with just a tap. This app is also created by the same developers of Betternet, so worth a try. No option to set up location manually before connecting to a VPN server, as it automatically detects your nearest server and connects you in no time. Though, you can purchase the paid version to select locations manually and get rid of intrusive ads.

All you got to do is one single tap on the “Connect” button and you’re done. Your iPhone will be connected to a VPN network letting you access your favorite websites, secure your Internet connectivity, hide web activities, etc. The best part of VPN HexaTech is that it doesn’t put a limit in the browsing bandwidth. 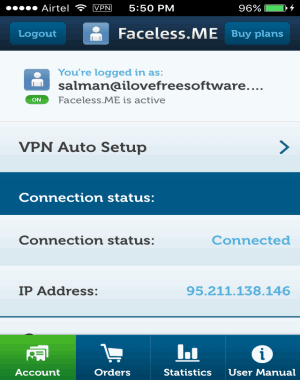 Faceless VPN Connection gives you a free VPN bandwidth of 1 GB when you register for the first time. In the same manner, you can use 1 GB of free traffic per month and per account in the free version. This app also detects the server location automatically and connects you to the nearest server. You can’t choose your preferred location manually using this app. So, if you want to use VPN for few hours or for a small amount of traffic, then you can proceed with Faceless VPN Connection.

Once connected, you will be able to unblock region-restricted domains and surf anonymously. It creates a secure channel between your iPhone and the web to make your Internet connectivity safe, privatize your web activities,  hide IP, etc. 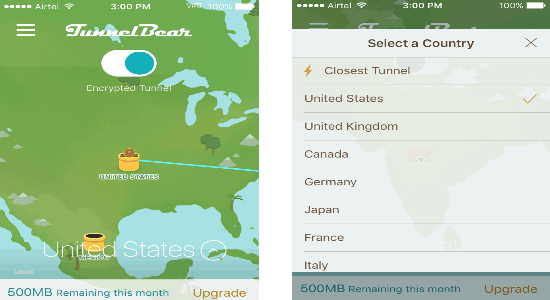 Tunnelbear VPN comes with a simple and intuitive interface to make it easier for you to connect to a VPN network. Similar to other VPN apps, it helps you access or tunnel (as they call it in the app) around various censored websites. In addition to that, you can surf the Internet securely and also hide your online presence from threats. No more monitoring your network by ISPs, hackers, etc. You can choose between 18 different locations such as United States, Canada, Germany, Japan, France, UK, Brazil, Denmark, and more.

The free account of TunnelBear VPN app is limited to 500 MB of bandwidth per month per account. If you exceed the limit, then you can upgrade your account to the paid version for unlimited bandwidth. But, there is a simple trick using which you can get a traffic of 1 GB in your account for the month. For this, all you need to do is tweet @theTunnelBear asking for the free data, and your account will be credited with 1 GB of free bandwidth within an hour. 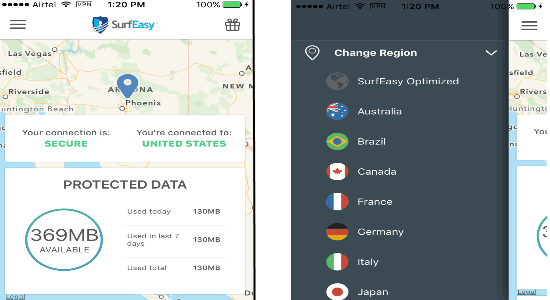 SurfEasy VPN is another simple VPN app to encrypt online data & information, secure privacy, get access to blocked sites, etc. After connecting to a VPN server, it automatically hides your IP details & location to prevent and keep your browsing activities anonymous and also secures your unsecured Wifi hotspots. It bypasses location-based firewalls to help you access your favorite but restricted domains.

SurEasy VPN app supports 13 geo-locations to connect to a VPN server including the United States, Canada, Brazil, France, United Kindom, Germany, etc. The only catch is that it is limited to 500 MB of traffic in the free version. However, you can earn data rewards by confirming your email, rating the app, adding multiple devices, inviting friends, liking and following SurfEasy app. If you feel like that this app fits your needs, then purchase the premium plans for features like unlimited traffic, ad blocker, and more.

This is a curated list of some of the best and free VPN apps for iPhone. You can use these apps to connect to a VPN server of various locations like the United States, Canada, UK, France, Japan, Switzerland, Netherlands, and more. These apps bypass location-based firewalls to give you access to the restricted, censored, and blocked websites. They also help you keep your online identity anonymous, secures your Internet connectivity, blocks various Internet threats, etc.