Here is a list of 10 of the Best Free Feeds Readers for Android. You can use these apps to access your online Feeds Accounts, and, read and sync feeds from various sources that you might have added to those Accounts. Most of these apps sync with your online accounts in the background and refresh all your News and articles from the Internet for you to read whenever you want. Supported online Feeds Accounts include Feedly, The Old Reader, InoReader, Digg and others.

And meanwhile, you can also take a look at Readiy for Windows 8, if you are looking for an application to access Feedly on your Desktop. 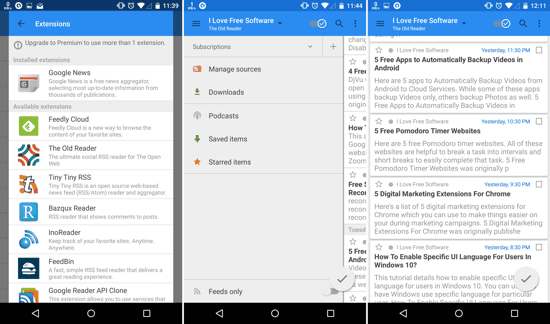 News+ is one of the most feature rich options out there for reading your Feeds on the go. The best part about News+ is the fact that it can support almost any Feeds service out there. The developers of News+ have made it possible for other third-party devs to create extensions which can add the functionality for specific Services right into News+. The app itself has numerous features which let you customize the Sync behavior, Offline availability of articles (by background download over WiFi), and the look and feel of the app. You can choose to see the feeds in simple list view, a grid view, or a pleasant cards interface. And yes, you can get to the extensions directly from within the app. The extensions include Feedly Cloud, The Old Reader, Tiny Tiny RSS, Bazqux Reader, InoReader, etc. Not just that, News+ has built-in support for Readability, Pocket, Instapaper, Google Mobilizer, and other such services as well. 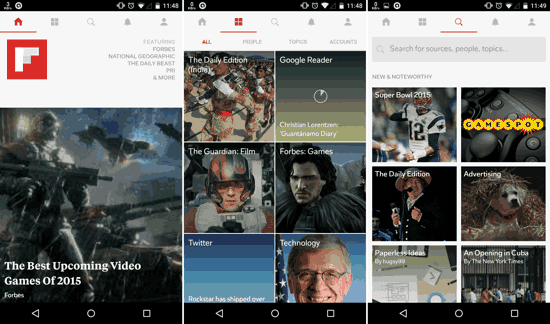 Flipboard is one of the most popular apps for reading news and feeds from various websites on Android devices. Flipboard has a magazine-like user interface which has been acclaimed the world over. Not just that, there are numerous sources available on Flipboard only which can be subscribed to, and you can even create your own personalized magazines and share them with other Flipboard users. The only drawback (as per me) of Flipboard is that it doesn’t give you enough info at once when you are just browsing. But then, that’s the compromise you will have to make if you want to try something more beautiful rather than simple text and image based lists. 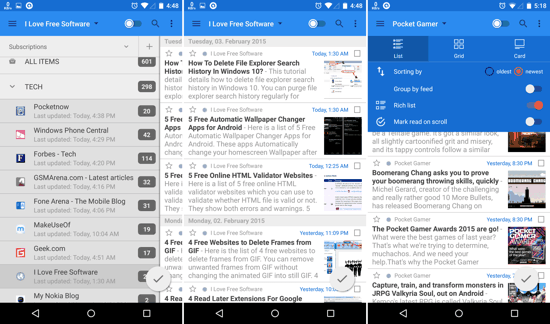 gReader for Android is one of the most popular Readers on the platform with support for Feedly, The Old Reader, and Local RSS as well. gReader is extremely flexible and yet, has a simplistic approach to towards its interface, albeit extremely beautiful and based on the Material Design guidelines. It has support for Offline reading which lets the app download the feeds’ contents in the background right after with the synchronization — don’t worry, you can set it to download articles only when connected to a WiFi network. gReader has homescreen widgets which can be added as per your wish. There are some features which are available in the pro version only; but the Free version itself is compelling, to say the least.

gReader is developed by the same developers who made News+ and offers similar functionality. But gReader offers a tight integration with Feedly, whereas News+ is somewhat less cohesive with the several services that it can connect to. gReader is also quicker at syncing your articles. 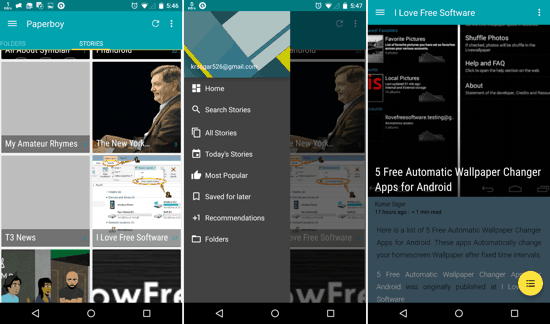 PaperBoy for Android is one of the most customizable Feedly readers. It gives you almost a free hand over how it looks. You can choose to have a list with image-heavy or text-heavy look, a simple article view or a Magazine view, and even choose certain in-app animations. There are several options worth taking note-of and am merely scratching the surface here. I’ll just say this — if you are not among the ones who’d settle for simplicity in their Feeds Reader apps, and would rather like more eye-candy, then PaperBoy might just be the best option out there for you. 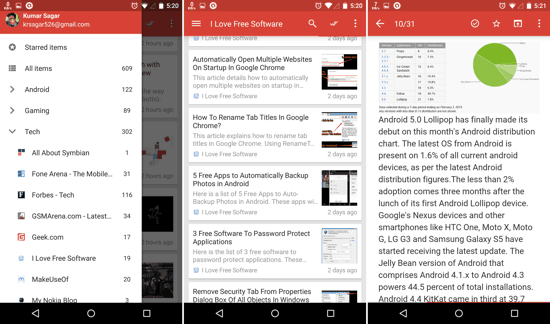 FeedlyReader is another beautiful free app for accessing the News feeds from your Feedly account. FeedlyReader has numerous themes (20 Color schemes, to be precise), and all the eye-candy transition effects that you expect from any app based on the Material Design guidelines. FeedlyReader allows you to save content for Offline viewing, and has most other essential features stuffed-in. 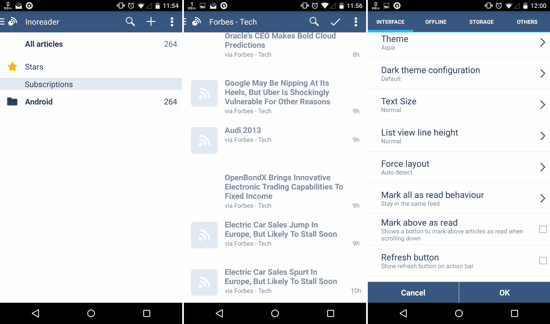 InoReader for Android is the official app specifically meant for the InoReader Feeds service. The app is extremely simple to use, and just tries to offer the bare essentials. You can Add and Subscribe to feeds right from the app and the usual Folder Structure is there for you to see as well. For users who use InoReader’s Feeds Service already, this is a must have. 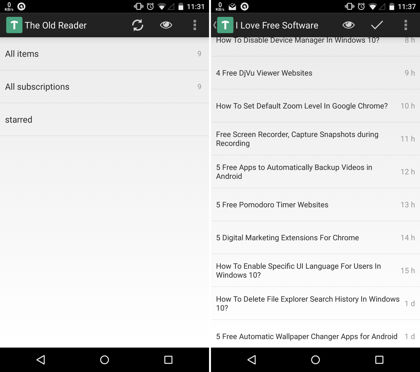 The Old Reader (Unofficial) for Android is a bare-bones app for accessing your The Old Reader Account and Feeds. Old Reader offers you nothing in terms of customizations, and doesn’t even let you add Feeds. But for people who crave minimalism, this app is a godsend. 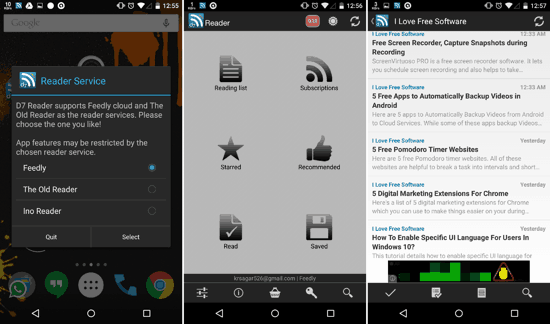 Want a simple app which supports 3 of the most popular RSS Services? D7 Reader for Android is probably the answer you were searching for. D7 Reader allows you to add any of your Accounts from Feedly, The Old Reader and InoReader. The app interface is aged though, and may or may not seem pleasing to you. Oh, and it has the Logout button right on the main screen (see the key icon in the 2nd screenshot above?), so you can easily switch between your accounts whenever you want! 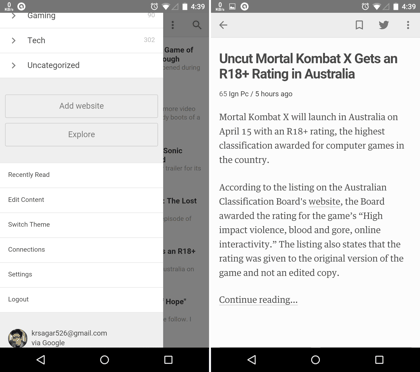 The official Feedly app for Android is a great option if you don’t really want to run around searching for options to access Feedly. It renders articles in a pleasing yet easy-to-read format, and is good at syncing your articles as well. You can add or remove articles as you wish, and search for newer sources within the app. The app does stutter and lag from time to time, but other than that, there’s hardly anything you would complain about. 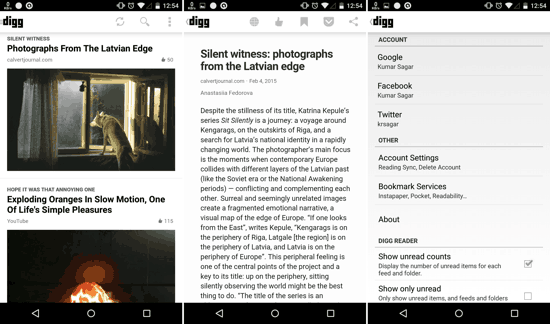 Digg is a popular News Aggregator and Feeds reader. The official Digg Android app has a mature, minimal, and eye-pleasing interface, with the focus on showing you the top stories from all over the Internet. You can see the News hand-picked by Digg’s Editorial staff  right on the homescreen, or just add any other feeds that you might be interested in. It’s worth a try.

That’s it folks! I will now conclude my list of 10 of the Best Free Feeds Readers for Android. If there is some other app which is pretty good and remained elusive from my eyes, you can always share its name in the comments section below.