There are many advantages in converting video to Flash format. You can easily upload such videos to file sharing sites such as YouTube. You can also upload those to Facebook and MySpace to share with your friends. And you can add those videos to your website so that visitors to your website can see those videos (this flash video converter helps with that too, as I explain later).

Doremisoft Mac video to Flash converter is quite feature rich. It costs $49.95, and is less than 11 MB in size. 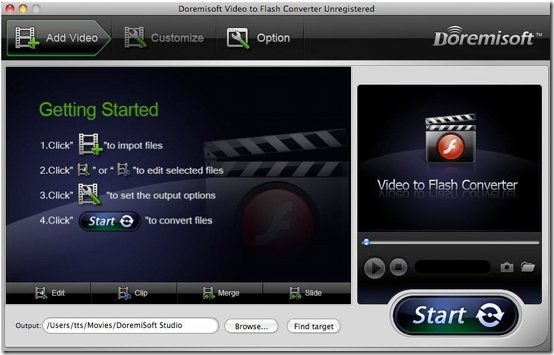 Here are some of the features of this Video to Flash Converter for Mac:

Extract Segments of Video: This video converter lets you extract segments of videos from your source video. You just need to specify start and end time of the segment.

Merge Videos: You can also merge several videos into one single video.

Add Watermark to Video: You can also add watermark to video. This is useful if you want to put your company or website’s logo in the video to get some additional publicity.

Embed URL in video: You can also embed clickable URL in the video. This is useful if you want to post video on some website, and want to embed a link back to your website in that video.

Adjust Video and Audio Settings: This Mac video to Flash converter also lets you modify video and audio settings as per your need. You can control bitrate, frame rate, video height, video width, and more.

Create HTML web page with video: Another nice feature of this video converter is that it can automatically create a web page which has the Flash video embedded in it. You do not need to do any coding for that. You can also add multiple videos in that to create a scrollable playlist.

Add effects to Video: It also lets you add special effects to video, such as, Emboss, Old film, and Gray effect. You can also adjust brightness, contrast, and saturation of the video.

As you can see from above, this Video to SWF converter for Mac is really feature rich. This is also quite intuitive, and has an easy to use interface. It also comes in a Windows version, and costs the same as Mac version.