Today I was trying to access DailyMotion for my daily dose of streaming videos, and got a nice message “Access to this site has been blocked as per Court Orders”. I was trying to access it using Airtel ISP. Then I researched on the web, and found that many ISPs have started blocking this popular video streaming site. Not only that, another popular site “Vimeo” has also been blocked.

I understand that there is some content on these sites that is for mature audiences only, but that is on almost all such sites, include YouTube. So, what’s next: Will ISPs block YouTube also in India?

DailyMotion is a particularly interesting case. It has tied up with many popular Indian content providers, like, Rajshri, and has some really nice content. Even the home page comes India specific when accessed from India. So, not sure why this sudden block of DailyMotion. 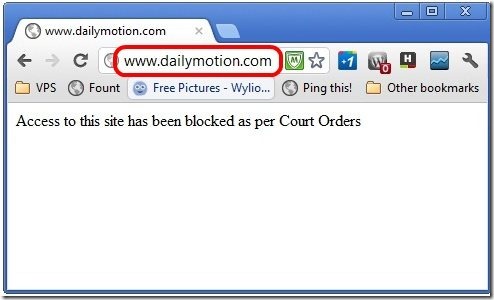 However, the blocking of websites is not related to just video streaming websites. There have been some bizarre cases as well. For example, XMarks.com, a popular bookmarking syncing website has been blocked as well. I have no clue why anyone would block that.

Nevertheless, we seem to be losing the internet freedom that we used to have in India. I can understand the block of websites like Pirate Bay, but DailyMotion and Vimeo should have been spared. If there is some objectionable content or practices of these websites, then they should be given a sufficient notice to fix those. But just shutting them down is not a smart move.

What do you think of this move of India government /Indian ISPs to curtail internet freedom in India? Let me know in comments.