Maluuba is a free Android app to perform multiple tasks with voice commands on Android. The app allows you to speak anything to your Android and work accordingly. It analyzes the speech and converts the same in task output on Android. You just have to speak out the task which you want your Android to perform and leave the rest on the app, as within a while it will show you the result on Android screen. 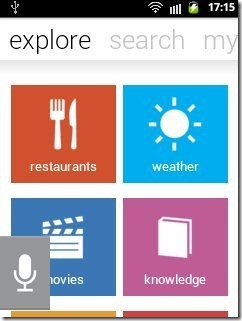 Maluuba app is truly a nice Android app which makes it easy by letting you perform each task via voice commands on Android.

Basically, the app gives you three areas of searching:

So, browse between the options and work accordingly with voice commands on Android.

Searching through voice commands is given separately in the app. However, the app also contains a voice commands button on every page. You just have to tap on the button and get started to make your Android recognize your speech to work accordingly. You can say that Maluuba Android app is an alternative to Skyvi app for Android and Siri for iPhone. Skyvi for Android is a virtual assistance for Android to ask question and the app will answer for all that questions. 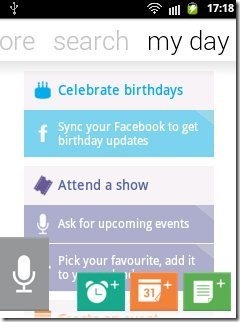 As I already mentioned above, that the app allows you to perform multiple task on Android through voice commands. The useful part of the app which I liked is setting alarm and reminder. You can easily say to your Android to set alarm or reminder and your Android will perform accordingly. On top of this, the app allows you to update Facebook status via voice commands. Just say “status update” and the app will let you update the status on Facebook via Android.

Also, check out the tutorial by us on how to add GPS shortcut icon on Android home screen.

Features Of Maluuba App To Perform Tasks Via Voice Commands On Android:

Download and install Maluuba app on your Android from here. Else, you can scan the QR Code image below and get the direct download link. 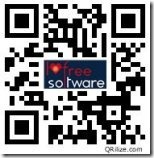 Maluuba app makes your work easier and faster by accepting voice commands for all your tasks. Just speak and your Android will know what to do. I love the GPS support, set reminder, set alarm, and update Facebook status via Android. Simple and easy task performer app is here for your Android. Try it out and see if it makes you forget Siri.