2048 is a free puzzle game for Windows 8. In this game, you need to unify/merge similar numbered tiles to achieve a tile containing the number 2048. The game sounds to be quite easy to play but is very tricky and challenging. The keenness to achieve the target tile keeps you hooked up with this game for hours.

In 2048 puzzle game, you are given a 4*4 grid board. Each tile is initially numbered 2. You need to swap the tiles to merge them and to achieve a target tile of 2048. But the challenge of the game is that only similar numbered tiles can be merged. 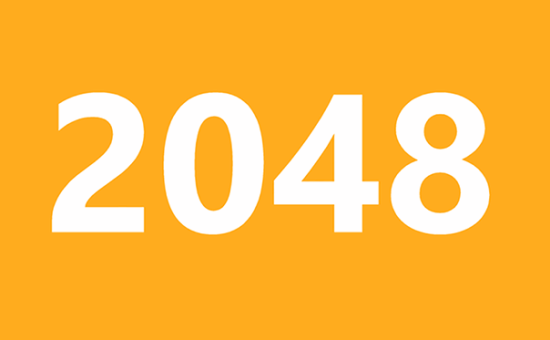 You can track the time you are taking to achieve the target through a timer. The game has great interface. So swap tiles, merge them to achieve target tile, and enjoy the game.

2048 game is actually becoming quite popular nowadays. This game was made quite recently (March 2014). My colleagues have already covered this game for iPhone as well as desktop version of it. So, I thought of finding this for Windows 8 as well, and thankfully, it is actually available for Windows 8 too. Let’s see how it fares on Windows 8.

You can get free 2048 game app from Windows store by using the link given at the end of this review. 2048 is a highly addictive game. The objective of this game is to achieve a tile with numbered 2048.

After launching the game app, you will find a board with 4*4 grid. In the starting of the game only two tiles are numbered with digit 2 while other are blank tiles. 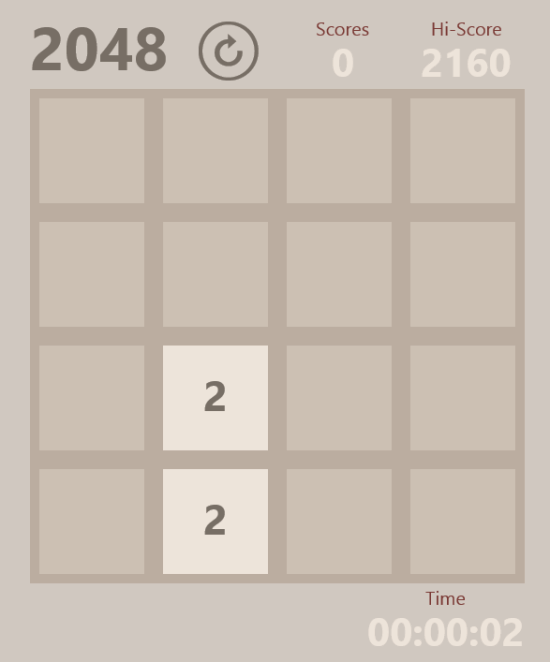 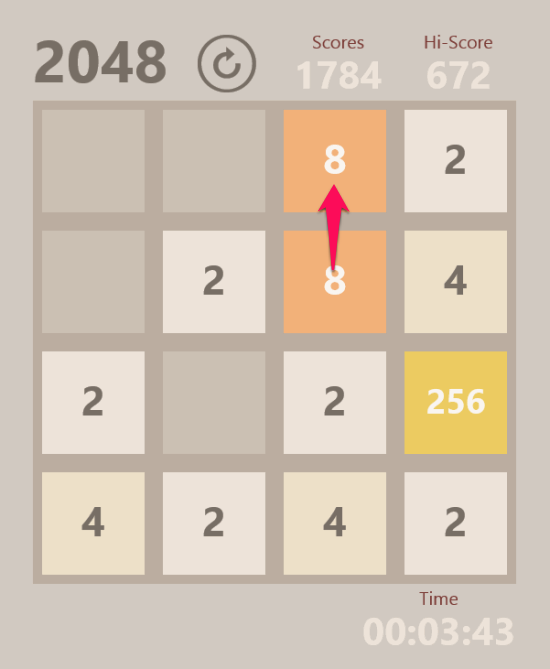 But the tiles can be swapped only if the edges of the row or column are blank tiles or there are similar numbered tiles adjacent to each other in a particular row or column.

You can track the time you are taking to achieve the 2048 tile with a timer which starts when the game starts. You can even share your score with your friend. To share, click on share score option available at the end of the game. 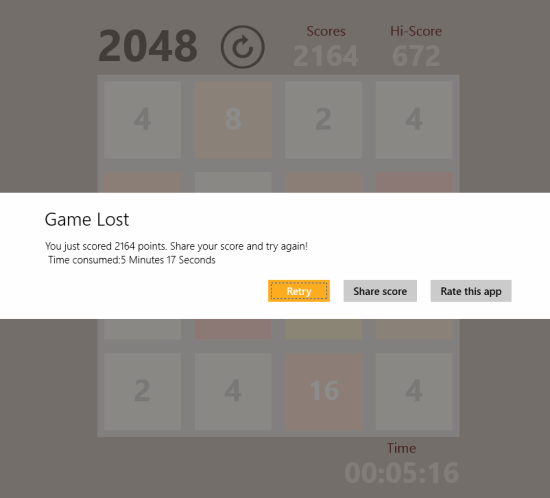 The different controls to play this game using your keyboard are mentioned below:

You can also use your mouse to swap the tiles. Simply click and hold left button and then drag left, right, up, or down to swap.

2048 is a puzzle game but with a new concept. The eagerness to achieve the target tile manages to keep you busy. I enjoyed this game a lot. The different rules of the game makes it challenging as well as interesting. If you are a fan of games like Sudoku, then you should definitely try this game.