Webtile PC++ is quite a useful system monitoring software to analyze CPU and RAM usage of your computer. Feather light and easy to use, Webtile PC++ analyzes and displays your system’s current CPU and RAM usage in real-time. RAM Usage is displayed both as percentage, as well as in Megabytes. Apart from that, it can also display general CPU information (e.g. number of physical and logical cores, actual clock speed). To top it all off, Webtile PC++ even has CPU benchmarking and RAM testing capabilities baked in, which let you check the computing power of two of your computer’s major hardware components. Sounds cool, right? Head past the break to find out more.

Note: While Webtile PC++ is great on its own, it’s not quite as feature loaded as the excellent InerziaMonitor, which can give information about anything from BIOS to Video Card, and features quick launch buttons as well. So if you’re looking for something more comprehensive, better check out InerziaMonitor 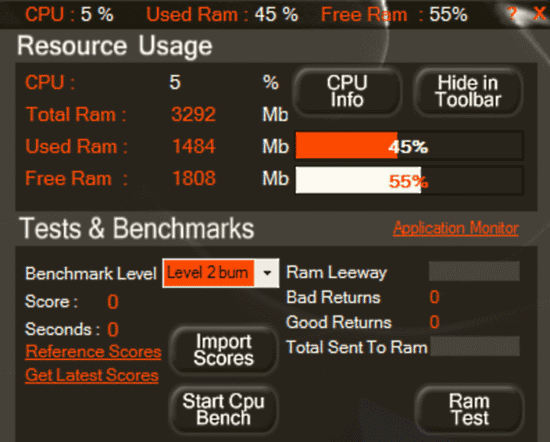 Installing Webtile PC++ to your computer is a fairly routine and easy affair. All you have to do is download the super lightweight (under 1MB) zipped installer, unzip it, and install it. Once fired up, Webtile PC++ is all ready to go. Here’s how its main user interface looks like: 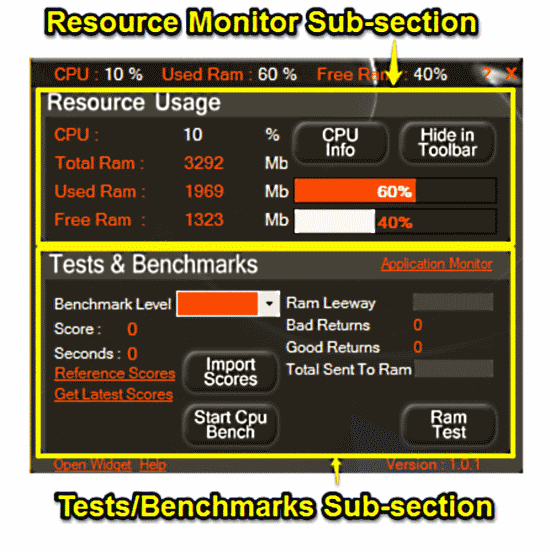 As illustrated by the above screenshot, Webtile PC++ is roughly divided into two horizontal sub-sections, each taking care of its two principal functionalities. These are briefly mentioned below:

How To Use This Free System Monitoring Software To Analyze CPU, RAM Usage?

Using Webtile PC++ to monitor your system’s CPU and RAM usage is essentially very easy. In fact, for the monitoring part, you don’t even have to do anything. All you have to do is fire up Webtile PC++, and the application will instantly provide you with a detailed breakup of your computer’s current CPU and RAM usage. The usage figures keep on refreshing automatically in real-time, as long as the application stays open. As simple as that!

As far as the CPU benchmarking and RAM testing functionalities are concerned, they are simple as well. Basically, CPU benchmark and RAM tester sub-modules use some industry standard figures (called benchmarks) from standardized hardware configurations (largely a combination of Processor and RAM). In the simplest of words, these tools let you get a basic idea about the performance of your computer system, with respect to standardized configurations.

To start up a CPU Benchmark test, simply select a burn level (1-3) from the drop down list, and click Start CPU Bench. Once you do that, the application (and your computer system) may freeze for a while. After the benchmarking is done, Webtile PC++ returns the resultant scores. To compare your system’s performance with standard configurations, you can either click the Reference Scores option to check some standardized scores, or download latest numbers via the Get latest scores link. 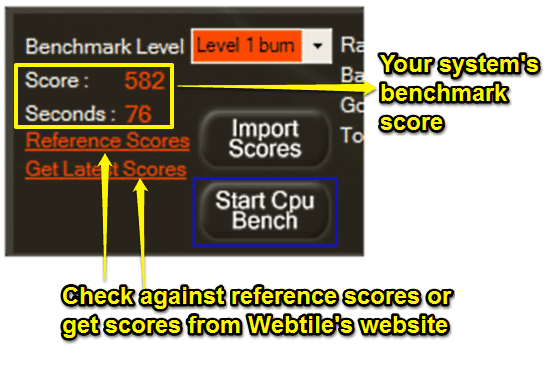 Similarly, to fire up a RAM test, simply click the RAM Test button. Just like CPU benchmarking, the application may freeze for a while. But after a few moments, it’ll return the RAM test results’ summary. Easy-peasy!

Webtile PC++ is a pretty useful free system monitoring software to analyze CPU, RAM usage of your computer. It’s simple, lightweight, and does what it says it does. While the interface could use a little more polishing, but apart from that, it works well. I suggest you give this little freeware application a try, and do let me know your thoughts in the comments below.