There are tons of big and small features that make the freshly baked Windows 10 the most awesome version of Windows ever. And one such feature is the virtual keyboard. Also known as on-screen keyboards, virtual keyboards are hugely useful. They let you register key-presses in nearly all applications, even at times when the actual device keyboard is unavailable for some reason or the other. But apart from that, they also add to the security factor, as virtual keywords can be used to safely enter important data, without the risk of it being recorded by key logger applications.

And being the latest and greatest of its kind out there, Windows 10 includes not just one, but two advanced virtual keyboards, complete with features like word prediction, split-layouts, and even emojis. Stoked?Let’s take a detailed look at the virtual keyboard functionality included in Windows 10.

Yep. Read that right. Since Windows 10 is a universal OS, designed to run on both conventional PCs as well as touch-enabled computers (and a whole lot of other devices), it includes two distinct virtual keyboards for each. However, you can easily use both virtual keyboards interchangeably. Let’s find out more about them, one by one:

1.) The Regular On Screen Keyboard

On Screen Keyboard is the conventional Windows 10 virtual keyboard, and is nearly identical in appearance to the virtual keyboard system application included in prior versions of Windows. It can be enabled via the modern UI Settings app, by going to Settings > Ease of Access > Keyboard > On-Screen Keyboard. Here’s how it looks like:

Pretty good, don’t you think? As illustrated above, the conventional on-screen keyboard looks just like a regular keyboard, having all kinds of standard and special keys. Using the on-screen keyboard is simple. All you have to do is to click the mouse cursor into any application/field that accepts text as input, and click the virtual keys to have the corresponding character typed. The keyboard also includes word prediction, which generates suggestions on the top bar as you’re typing, for quick text entry.this

The “cooler” variant of the on-screen keyboard, Touch Keyboard is full of impressive bells and whistles. While its name implies that it’s more suited for use with touch-input based devices, Touch Keyboard can be as a virtual keyboard in the desktop environment just fine. By default, it’s always running in the system tray, and can be conveniently invoked by clicking its system tray icon. Check it out:

Looks dope, doesn’t it? As seen above, the Touch Keyboard sports quite a different (and more compact) layout as compared to the traditional on-screen keyboard. You have big, easy to view standard keys (lower case alphabets, numeric and emoji toggle keys etc.). By default, only the lowercase alphabets are shown. However, you can easily use the Shift (the one marked with an upward arrow) key to access the uppercase ones. What’s more, long-pressing a key reveals additional tied-in functions accessible with it. The Touch Keyboard also supports powerful word prediction, and suggestions appear on the top bar, as you are typing away in an application/text field.

But hold on. That’s not the end of it. The Windows 10 touch keyboard includes some nifty additional layouts as well, and these can be toggled via the layout selector key at the bottom right corner of the keyboard. The Split layout essentially splits the touch keyboard in half, placing each half in one corner of the screen: 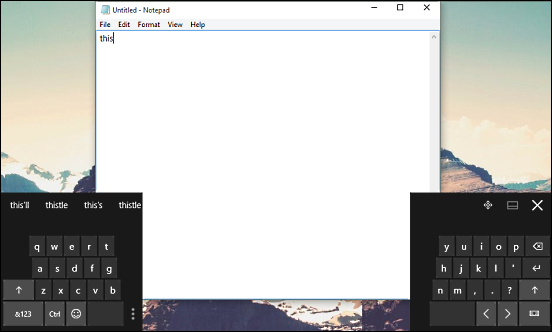 The Handwriting recognition layout is really cool, and lets you enter characters by simply drawing them freely with the mouse cursor (or via touch, if the device supports it). This includes text prediction as well. 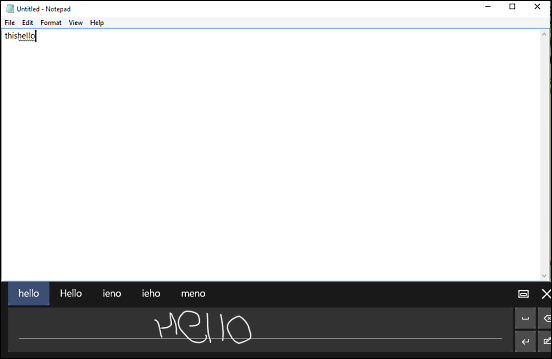