Perian is a free and open source QuickTime component that allows you to play several popular video formats on QuickTime player that are not natively supported on Mac OS X. This is a really good option for those people who do not want to install other media player on their Macs and are more comfortable while using QuickTime as their default video player. This application is a Swiss Army Knife for QuickTime.

It is a small utility that adds amazing amount of functionality to QuickTime Player. It supports a huge list of formats that are common these days. Without Perian I would get this unfortunate but stupid dialog box as shown in the screenshot below when I tried to open up files that are not supported, which by the way is quite annoying.

After you install Perian, this is what you get:

How to install Perian for Mac:

Perian not an application, so the installation part is a little different. To get started click here to download the installer. The installer is a really small file just around 3.4 MB. After you have completed the download, just double-click on it. This will open up a window as shown below. There you are supposed to double-click on Perian.prefPane as pointed out in the screenshot. 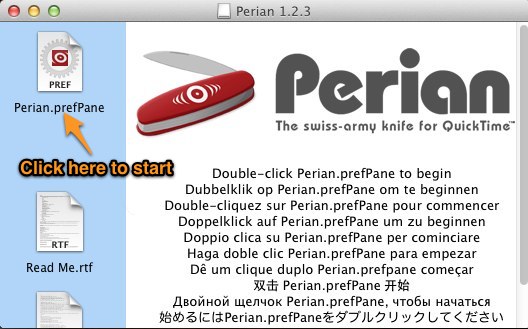 Now the application will open up System Preferences and a dialog will come up as shown below that will ask you if you want to install the Perian or not. I would like to suggest that you enable Perian for all users. When you click on Install, a dialog box will appear asking you for your admin password, fill the details and you are done with installation.

After the installation is completed you will be able to see the Perian icon in the System Preferences as shown in the screenshot below. Now you can start enjoying different video formats on your QuickTime Player. There is nothing much to configure just start playing media with your QuickTime and it will work.

However if you are curious then clicking on the panel will open up a window as shown below, from here you will be able to Remove Perian if don’t want to keep it, mess with the Audio Options etc. 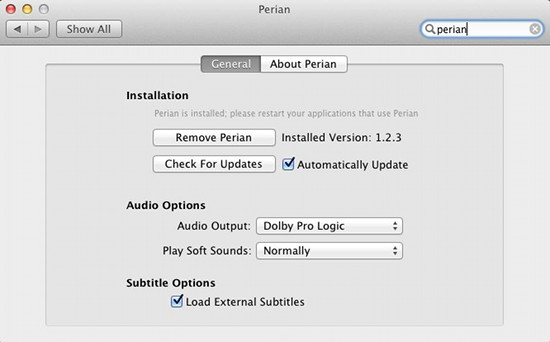 Feature of Perian for Mac:

This open source component for QuickTime, enables QuickTime player to be able to play a huge list of formats of video that are natively not supported by the in-built components of the  QuickTime player. This also allows QuickTime to load and show external subtitle files making Perian one of must have for Mac users because Perian extends QuickTime functionality and that too for free.

This plugin has some problems Mountain Lion, there are some solutions, but lets hope the developer team makes a version that will work on Mountain Lion without any glitches.

As you can see above, Perian supports a huge list of formats; almost all the popular formats are supported. This really supercharges your QuickTime. If you are used to using a video converter for Mac just to make your videos QuickTime compatible, you don’t need to do that anymore. Let Perian work its magic on QuickTime.

Perian is a really nice software, that enables your QuickTime player to support many popular video formats that are not supported natively by the Mac OS X. This utility is free and open source. The best part is that Perian integrates into Mac without any problems so that you can start enjoying all kinds of video. If you like the QuickTime player’s look and feel and don’t want to opt for other players to play non-Quicktime formats, then Perian is your best bet. Its a must install.