Secret Camera or SC for short might be one of the most advanced secret camera apps that we tested. When you run the app, only its process is created and the only thing that you’re gonna see from it is the notification tray icon. 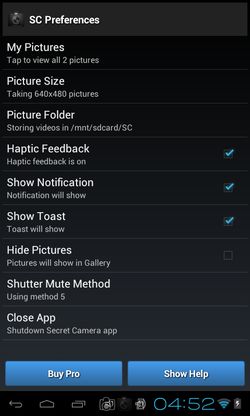 Screen can be turned off, in fact, screen has to be turned off. To take a photo, you just have to use the volume keys. Press a volume key, doesn’t matter which one, and the app will snap a photo. Automatic image snapping at specific intervals is also possible. When you’re done, open up the app control panel from the system tray and you’ll be able to access created photos.

Mobile Hidden Camera is so secretive that when you install it, its icon is called Simple Notepad, and it has an icon that a notepad app would normally have. 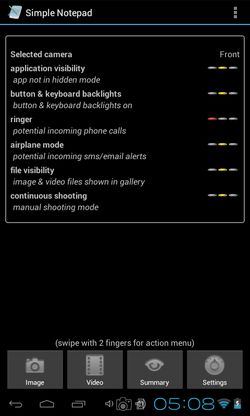 This camera app can both take pictures and record video. Two work modes are available for taking secret photos. In manual, you just get a blank screen and the image is taken every time that you tap on the screen, while in automatic an image is taken every few seconds after clicking on the camera icon from the bottom toolbar menu.

USpyCam also has two work modes, manual image snapping and automatic image snapping. It does have camera preview window, but it can be turned off. 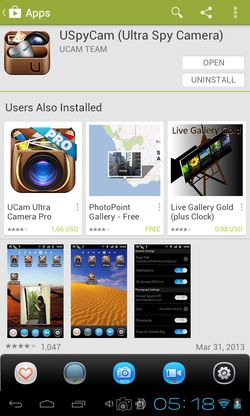 Toolbar at the bottom is the only thing that you’re gonna see from the app. While the app is running, click anywhere on the screen and it will create an image. For automatic image snapping, you of course don’t have have to do that, just click on the automatic image snapping button, the one in the middle and you’re done. Photos are taken without screen preview, without noises and in HD, if your camera supports it.

Spy Camera by TrillDroid can only take photos manually. When you run the app it will completely darken your screen. 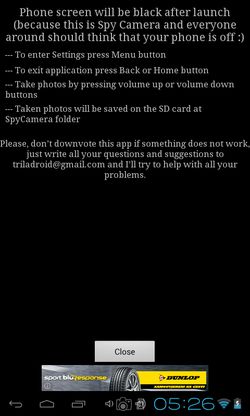 Instructions on how to take photos can be seen only the first time that you run the app. After that when you run this secret camera app, the screen goes dark. You can set an image for the background by clicking on the settings button at the black screen. Use volume keys to take photos.

Get Spy Camera by TrillaDroid.

Secret camera apps that we tested might not work with your phone, so make sure that if one doesn’t work you move on to the next one. Start with Secret Camera, first one from the list, and go through the list from there.