Here’s a list of 5 PHP editor software for Windows 10. Editors from the list down below are built to work with PHP by having support for things like syntax highlighting, code completion, error checking and more. Some of them are simpler, while others are more advanced, with more features, like, support for additional programming languages. Having a proper editor can help you become more efficient and get projects done more quickly. Applications from the list down below make it possible for you to do just that. Let’s have a look at what exactly did I manage to find. 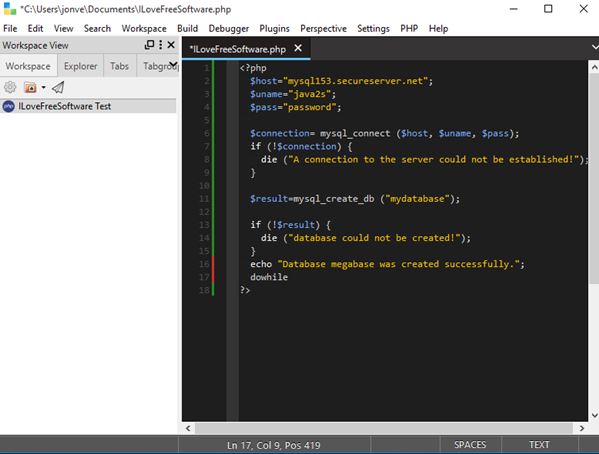 CodeLite is a good PHP editor for Windows 10. It isn’t exclusively a PHP editor, seeing how it also supports C, C++ and Node.js next to PHP. On top of these 4, it’s also possible to setup additional support for Javascript, CSS, HTML and other web languages through plugins. Other functionalities that are available through plugins include things like support for SFTP connections, abbreviations, code completion, support for GIT, subversion, comparison tool, spell checker, and more.

Interface layout depends on the type of projects that you create (if it’s PHP, C++, or Node.js). Left sidebar will, for the most part, hold a file explorer, database manager, SFTP connection manager, tab explorer and things like that. Files are opened up in a tabbed editing area on the right. Multiple syntax highlighting themes are available. Additional status window can be opened up down below. Menu for accessing rest of the options is in the top left corner. Easy to follow layout and advanced features, what more could you ask for.

Bluefish is an all around software for web development where support for all the commonly used web languages can be found. This includes not just PHP, but also HTML, CSS, Javascript, SQL, and even C up to a point.

As far as PHP editor specific functionalities goes, Bluefish offers a database of code snippets for quick insertion of database connections, arrays, file includes and so on. Interface layout follows that of CodeLite. Left sidebar has a file explorer, tag find tool, special character insert tool and the previously mentioned snippet insert tool. Zen Coding support, which allows you to quickly code HTML and CSS is included by default. Multiple documents can be opened up at the same time using tabs. They are down below, instead of up top but this can be changed in the application settings.

Get Bluefish for Windows 10. 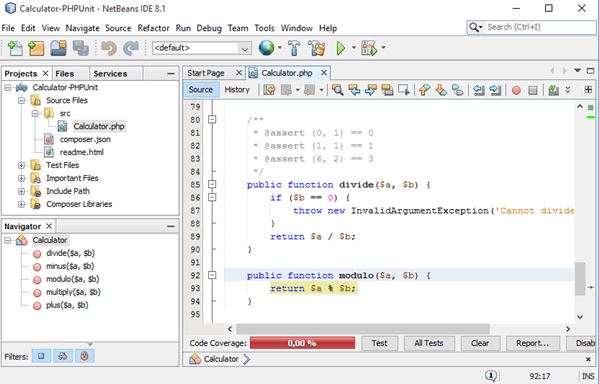 NetBeans is another multipurpose editor for Windows10 that doesn’t have to be a PHP editor per se. It also comes with support for Java, C, C++, HTML5 and Javascript. Installer “bundles” allow you to install Netbeans with support for only those languages that you need. Alternatively you can download the full pack, but note that it’s 215MB so it’s a bit bulkier.

The usual features are available, like syntax highlighting, code completion, error highlighting, semantic analysis, code debugging and more. On top of that, it also has support for PHP coding frameworks like Symfony, Zend, and Yii. FTP connections to web servers are supported although setup takes a few steps and requires installation of additional modules (if you don’t install the PHP bundle that is). Same thing goes for getting Git and subversion to work, which are also supported. Interface follows the usual layout, as you can see from the image above. 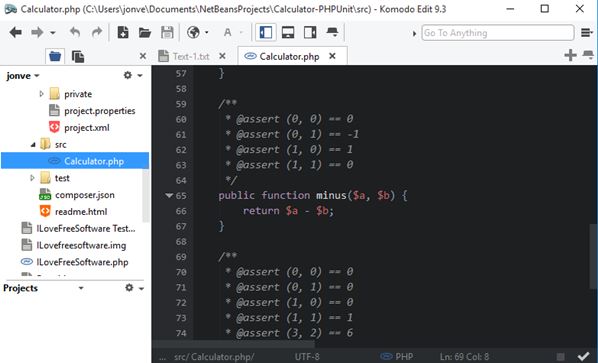 Komodo Edit is a PHP editor software for Windows 10 which comes with built-in support for an even wider selection of web programming languages. HMTL5, CSS, Javascript, PHP, Ruby, Python, Perl are just some of the supported languages.

Interface is simplistic, similar to that of CodeLite. Left sidebar has a file explorer and a project manager while the rest of the interface on the right-hand side is reserved as the actual editing space. It’s tabbed, so multiple documents can be edited at once. The usual selection of features are available like themeable syntax highlighting, code debugging, advanced find and replace tool, support for regular expressions, extensibility via plugins and more. 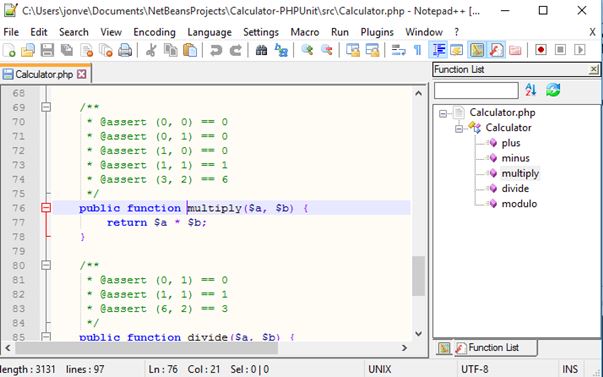 Notepad++ is again not a PHP editor software. It’s actually just a beefed up text editor. Despite that it can still come in handy for all those who are just getting started with PHP and don’t need clunky editors like Komodo and NetBeans, which are several hundred megabytes in size.

Feature wise Notepad++ comes with syntax highlighting, powerful find and replace tool, regular expression support, sidebar with FTP connection manager, file explorer, functions list and other tools which you can install from the built-in plugin manager. Main advantage of Notepad++ over all the other PHP editor software for Windows 10 that I covered would be that it’s small and lightweight, just around 5MB in size. It lacks advanced features like code debugging, but it will be more than enough for a PHP beginner.

Each one of the 5 PHP editor software for Windows 10 from the list above worked great. I was genuinely surprised with CodeLite, especially with the number of features that it has to offer. NetBeans is very advanced, and Notepad++ is great if you need something simple, for making quick edits. Let me know what you think, which free PHP editor do you think is best by leaving a comment down below.