Q4 Keyboard is an Keyboard App for Android. It is definitely the smallest keyboard as it can be reduced to only four keys. It also has a full fledged QWERTY Keyboard in addition to the unique 4-keys Keyboard. Users can easily switch between both. The keyboard is divided into 5 groups of alphabets, a backspace key and a space key. The app has so many other interesting features like, Invisible keys, Movable and Resizable keyboard, and Speech-to-text feature. It also has a Short’nd feature that allows us to type long words very quickly by typing only the first few and last few letters. 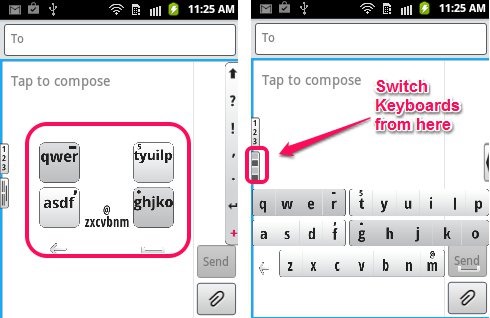 The QWERTY form of Q4 Keyboard App has 5 bars with alphabets printed on each of them in a way that together the five bars make a full-fledged QWERTY Keyboard. The first bar has QWER, second has TYUILP, third has ASDF, fourth has GHJKO, and fifth has ZXCVBNM. This Keyboard can be easily transformed from a full A-Z keyboard to just four Snap keys, one in each corner. The first four bars are transformed into 4 keys and has the same alphabets as did the bars. For the remaining alphabets, you have to tap between backspace and spacebar.

This Keyboard App for Android is very similar to the one I reviewed earlier on our website, i.e. ABC4 Keyboard, and is developed by the same company as well. 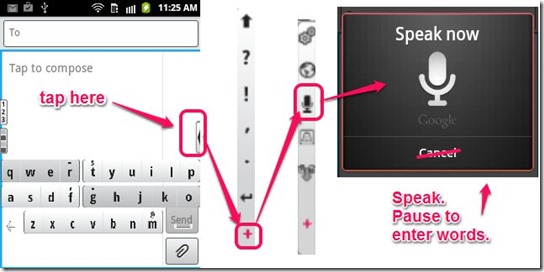 Using this Keyboard App for Android is not very different than others. You type alphabets and it predicts words. Yes. But there is one interesting feature which makes this keyboard unique. When you are using Q4 Keyboard, you can tap anywhere on the bar (in full QWERTY mode) or keys (in 4-keys mode), without the need of pressing the specific letter. Q4 is an intelligent app that will automatically predict the letters you want to type. You may not see anything initially. But as you press other keys that have the letters you want to insert, Q4 will start generating predictions. A word suggestion list with multiple results will appear on the screen, with the most accurate prediction indicated in blue. Just tap the space bar to insert the word in blue. Or select any other prediction easily by tapping on it. The word will be inserted on the screen.

For example, if you need to type ‘hello’, just tap fourth bar/key that contains H, tap anywhere on the first bar/key to insert E, to insert double L tap twice on the second bar/key and finally tap on the fourth group that contains O. That’s it. This intelligent android keyboard app has already predicted that you wanted to type ‘hello’ and is indicating it in blue. Tap spacebar to insert the word into text. 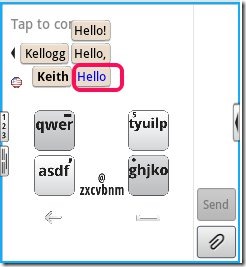 If you would like to have a normal QWERTY keyboard as well as a Traditional Keypad, then read about TouchPal X keyboard, an Android keyboard app that lets you switch between QWERTY and traditional keypads quickly.

Q4 Keyboard is a good Keyboard App for Android that enables you to type faster but it requires some practice. The predictions are accurate most of the times but the trick is to switch to the full QWERTY mode when you want to type names, and click on individual letters from there. Try this Keyboard App for Android and you may say that this is the fastest keyboard.