ABC4 Keyboard is an Android keyboard app that has only four keys! The app has many unique features which allows its users to make the keys invisible, resize the keyboard from a full A-Z keyboard to just four keys, and move the keyboard anywhere on the screen.

This app shows four keys, one in each corner. Each key has a few alphabets printed on it. For example, first key has abcd, second has efgh, third has ijklmn, and fourth has opqrs. For remaining alphabets, you have to use space in middle of buttons in bottom row. See the screenshot below to better understand this layout. 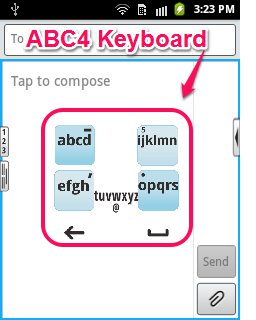 Now, the most interesting part is typing. Tap anywhere on a key to insert a letter from that group.  At that time, you will not see anything being typed on the screen. However, don’t worry and keep typing. As you keep typing, the app will predict the word that you are trying to type and will show word suggestions. Just pick the one that you want and the word will be printed on screen. So, by just using 4 keys, you can type an entire word easily.

For example, in the screenshot below, I am trying to type house. See the word predictions that it gave. Also, see that “house” is shown in Blue, which means this app thinks I was trying to type house, and I can just click on space bar to have that word selected. If I wanted some another word, I have to click on that word instead. 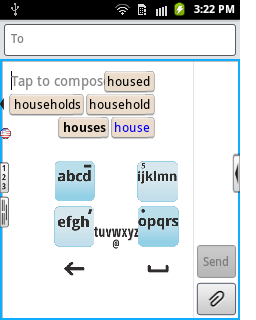 This technology allows us to type in words very quickly. However, it might take some time to get used to it, and it does comes with some serious limitations as well, and I believe I need to go over those, before I talk about other features of this keyboard app.

However, major advantage of the app is speed. As you have to click on just 4 keys to type any word, it becomes much faster than using any other Android keyboard. Of course, if you often use lot of names etc., then you will need to regularly switch to full keyboard, which would actually slow you down. 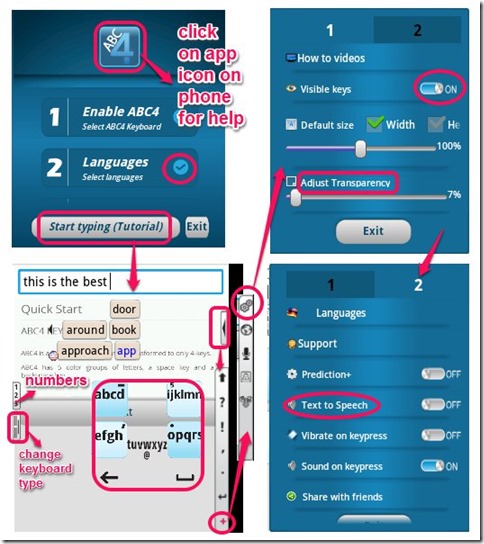 If you are looking for a good Qwerty or traditional keypad read about TouchPal X keyboard, a really good Android keyboard app.

How to use ABC4 Keyboard: 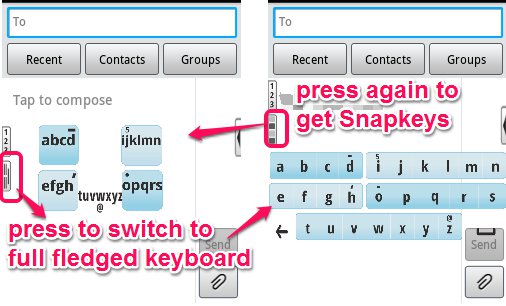 ABC4Keyboard is a really good Android Keyboard App that enables you to type faster easily. Though the app is not perfect and sometimes difficult to use, it worked fine till I wanted to enter the words it predicted. It becomes stubborn when I want to erase a word as the backspace button, instead of deleting the word, keeps showing previous predictions. But I still like the uniqueness of the app. Do try it out to experience the unique interface and let me know your feedback in comments below.