TouchPal X Keyboard is an Android Keyboard App that lets you type faster than ever before. It is a fantastic app to type long text messages easily. The app is totally customizable and is designed to make typing as simple as possible. It has the best features that could be available in any Android keyboard.

TouchPal X Keyboard makes typing tasks fun and is very helpful. We have reviewed many Android keyboards earlier, but I found this app the best. The most amazing part is that it is available absolutely free. With features like speech-to-text, next word predictions, sentence gestures, and keyboard customization, this app is a must download. 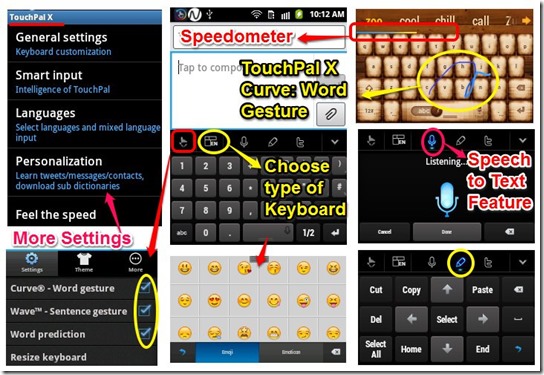 Note: A warning is displayed while activating TouchPal X that says that the Android keyboard app may collect your personal data. This is a standard message in Android phones for third-party keyboard apps.

Using TouchPal X Keyboard is simple and fun once you get used to it. The two main highlights of this Android Keyboard app are:

You can first customize the application according to your ease. Once you have installed the keyboard on Android, Touch the TouchPal X icon on your Android phone after installation to get the settings. From Smart Input you can select settings like, word gesture, sentence gesture, correct mistyping, tap space to select next word and others.

You can also choose to have inputs from more than one language and also personalize your TouchPal X dictionary.

Smartphone keyboards are inherently slower to use than normal PC keyboards (unless, you are typing on smartphone from PC itself!). But apps like TouchPal X Keyboard greatly reduce that gap.

TouchPal X Keyboard is the best Android Keyboard I have come across. I never knew typing could be so interesting. It felt almost like playing a game. The predictions were really good and accurate. Plus, it let us use mixed dictionary which is really great about this app. The speech to text feature is good too, but now I would rather type with this amazing Android keyboard app as it is more fun.