MD5 & SHA Checksum Utility is a handy SHA and MD5 hash generator tool that can generate hash values of any kind of file. You can even verify hash values of two different files, to see if both files are identical or not. This tool comes in handy to find out integrity of files that you downloaded. If hash value is equal, file is downloaded correctly, or else not.

Screenshot below shows interface of this hash generator tool where you can add any file to generate all supported hash values.

Note: With this free version, you can generate SHA-1, SHA-256, SHA-512, and MD5 value. But pro version is also available for generating hash values for multiple files together, export results as CSV/TXT file, etc. Although, paid version offers many useful features, but free version is also good enough

How To Use This SHA and MD5 Hash Generator Tool?

MD5 & SHA Checksum Utility is a portable tool. So unlike many similar hash generator tools, you won’t have to install it on PC. It can run directly, even from your Flash drive.

Interface of this tool is very simple. To generate hash values of a file, first select hashes that you want to generate for a file, and then add the required file. Either you can add file with Browse button or can drag n drop file on its interface. Immediately after adding file, all the selected hashes will be generated immediately.

After generating hashes, you can copy just a particular hash or all hashes to clipboard. Benefit of copying hashes is that you can paste them to Windows Notepad, and can save it to PC.

In the similar way, you can generate hash value of another file. Now if you have to verify hashes of both files, enter hash value of first file in available box, and click on Verify button. If files are same, hashes will match. Otherwise, you could be sure that files are not identical. 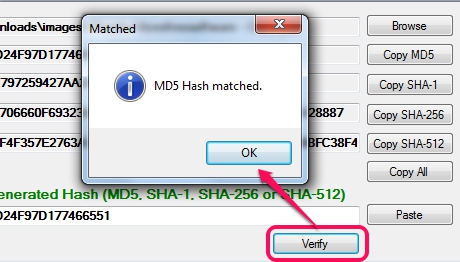 MD5 & SHA Checksum Utility is quite useful for all users. It is quite simple to use and small in size.