Sky Battle is a shooting war game available for free download on your PC. Shoot the enemy planes and bring glory to your country.

You are a pilot from the times of World War 2. You can choose from different varieties of planes and missions. Your missions include patrolling, invasion, destroying enemy planes, and much more. 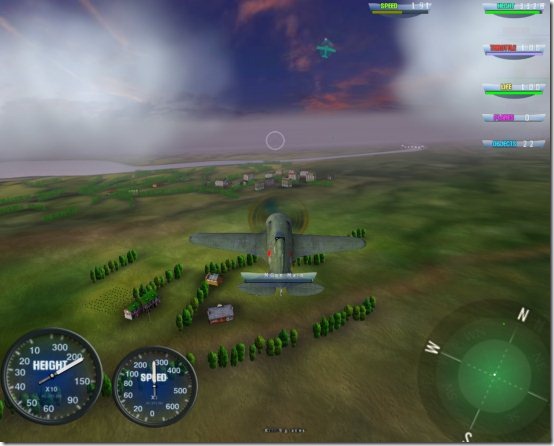 About this World War Game:

In this war game you have to protect your country from the enemies. Fly around the borders of your country or invade other countries.

This game has two modes: Campaign and Quick Play mode.

Campaign: In campaign mode you have to select your choice from two teams. The first team is Russia, Britain, and USA. The second team consists of Japan and Germany.

Each mission has 33 goals to complete. After you complete the initial goals then the higher goals will be unlocked. You can choose from different planes; but some are locked and you have to complete missions to unlock them. You also have to choose from three different skill levels: Novice, Soldier, and Ace of Aces. Novice means you are a beginner, soldier means you are good at tackling your enemies and Ace of Aces means you are a pro; ready for any dangerous attack.

Quick Game: In quick game you will be asked to choose from different options like: Terrain, Weather, and Skill level. The weather options available are: early morning, sunny, rainy, tonight, and night. Here also the skill levels are: Novice, Soldier, and Ace of Aces. 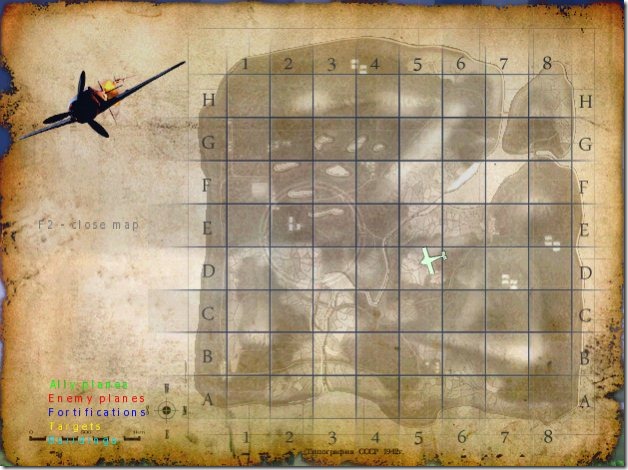 You will be given a mission and a place on the map where you have to fly. From the above screenshot you can see the map and your plane is indicated with White color; located at D5 position. You may be asked to visit any location for completing the mission; then this map comes handy.

The center of the screen shows your gun’s aim. If the machine gun is used continuously it heats up; this is indicated on a meter below your aim. The center bottom shows the missions or place to visit. The enemy planes are indicated in Red color always; with a small icon. The other colors are our team planes. So, be careful while shooting the enemy planes; you might end up shooting your own team planes. Sometimes in a mission you are required to shoot objects to complete a mission.

Don’t worry about the oil, there is no limitation to your flying time.

The plane functions like a real fighter plane from the old times. The controls of the plane are:

This war game has very good graphics and nice plane simulation effects. Sometimes while closing the game it may show error; but it’s not a major problem. If you like to try another war game, then go for Hidden and Dangerous.

Fly the planes and let me know your views on it. To play this war game Download Sky Battle here.