The music player is totally controlled by stars, planets, and satellites. Artists are represented by different colored stars, albums in the artist are defined by planets, and revolving satellite contains the song to be played on your iPad. 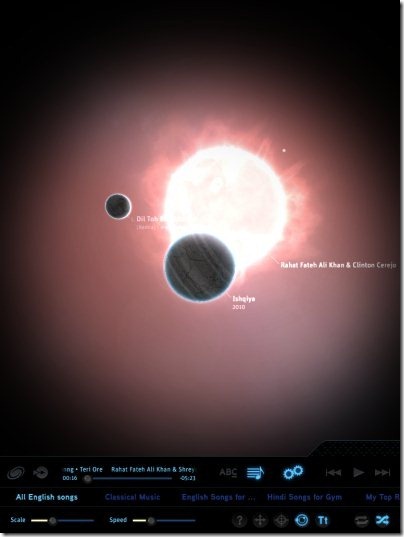 The graphics of this iPad music player app are of very high quality. 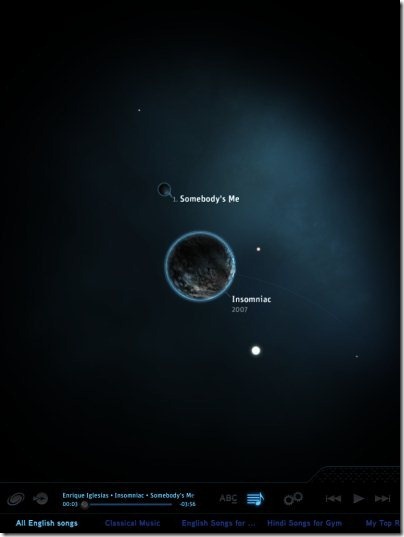 Why One Should Install This iPad Music Player App?

Of course, the reason for installing this iPad Planetary music player app is its beautiful user interface. If you are feeling bored with your old iPad default music player app, then bring a dramatic change by adding planets, satellites, stars, and a beautiful sky to your music. Make your music fly in the universe.

Obviously, the primary reason will be its planetary user interface. But, there are features which separate it from other music player apps. Apart from the music player interface, you can easily play the artists according to the alphabets they are starting from. For e.g, if you select the letter “L”, then the app will show you all the artists which are staring from the letter “L” in your music library. The other option is to select the music according to the playlist which you have created in your music library. Just switch the music player app to playlist mode, select the playlist from which you want to play the music and enjoy your favorites on your iPad.

Common But Actually A Useful Feature: 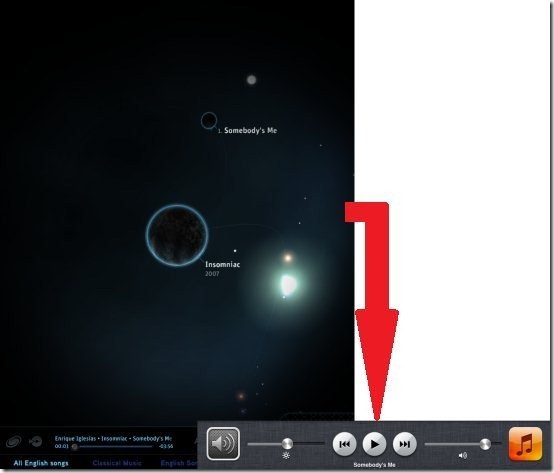 Tap on the settings button in the toolbar of the app and enable the settings menu of this music player app. You can set the scale of the star according to your preference. Also, the app settings allow you to set the revolving speed which makes your music universe act as you want. These two are the only music player settings which I felt the most useful one.

Disappointing Part Of The App:(

The most disappointing or unsatisfying part of this iPad music player app is its browsing the artist or music when they are many in numbers. All the artists looks messed up in the planetary form on iPad screen. It becomes difficult for the one who is looking for some particular music from number of artist saved in your iPad music library. Had it been inbuilt with a search bar option, it would not have been that disappointing. But, even there is no search option in the app. So, it would be great for the app, if the developers would think upon adding a search bar in the app to search for a particular music and play it on your iPad.

Don’t miss out the post by us on media player apps for iPhone.

For Android users, we have reviewed some awesome music player apps for Android.

Search for “Planetary” app in App Store to download and install the Planetary app on your iPad. If you are looking for some simple and direct method of installing this music player app, then scan the QR Code image below and download the app. 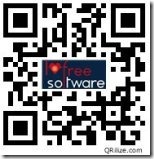 At the end of this app review, I just want to say that this iPad music player app just rocks. Finally, you have a got a player which can let you watch the iPad screen even if you are playing audio files on your iPad. Make your small ones play with stars, planets, and satellite while listening to music.