Here is a list of 5 free online games to learn numbers up to 100. These games come in handy to make small kids learn numbers in an interactive manner. Parents and teachers can use these games at school to increase the participation of kids and make the exercise of number earning more exciting.

The 5 games that I have reviewed in this article are The One Hundred Number Chart, Number Series, Count To 100, Balloon Pop Math, and postletter.

The One Hundred Number Chart: 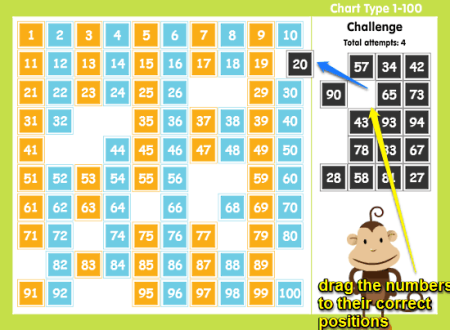 The first in the list of online games to learn numbers up to 100 is The One Hundred Chart. This is a game with good interface. An animated monkey guides you throughout the game. Essentially, the game consists of two levels and you have to choose among them.

The two levels are:

Based on the level you choose, you have to put the missing numbers in the right place. The missing numbers in the line or chart are jumbled up and placed on the right hand side of the chart. You have to pick them up from there and keep them at their right place in the chart. The time taken and mistakes you make also play a role in your final score. Read the detailed review here. 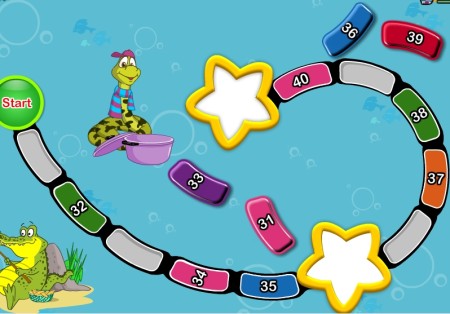 Number Series in another interesting option among various online games to learn numbers. This game allows small kids to learn numbers up to 100 in a step by step manner. At every step, kids will learn 10 numbers, moving in upward direction.

This is an exciting game with a kid friendly interface. Basically, the game consists of multiple levels, and a chain with 10 numbers is available at every level. The chain at first level contains numbers from 1-10. As you move ahead in the game, the numbers keep increasing from 10-20, 20-30, and up to 100. Along with numbers, there is also a start button on the top of the chain at every level. When you press this start button, some of the numbers in the chain are removed, leaving empty spaces in the chain. You have to fill these empty spaces by placing the right number at the right place. 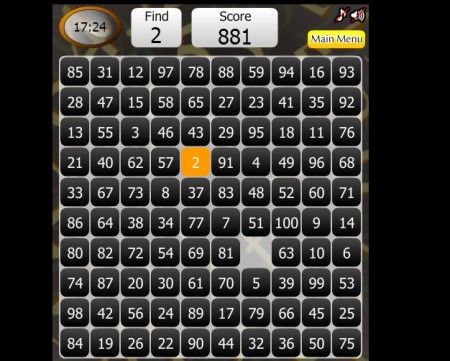 Next among free online games to learn numbers up to 100 is Count To 100. This is pretty simple game that comes with grids or squares of different sizes. Based on the size of the grid ( a 5*5 grid will show numbers up to 50), numbers will be shown on your screen. These numbers are jumbled up and you will be asked to find numbers in the right order from this set of numbers. First you will have to find the number 1, then 2, 3, 4, 5 and so on and so forth. The time you take in finding numbers is a big factor in determining your final score. You can also submit your final score and compare it with scores of other users. This game has three different grids. You can start playing the game with a 5*5 grid size ( contains numbers up to 50) and then slowly graduate to 7*7 ( numbers up to 70) and finally to 10*10 (numbers up to 100). 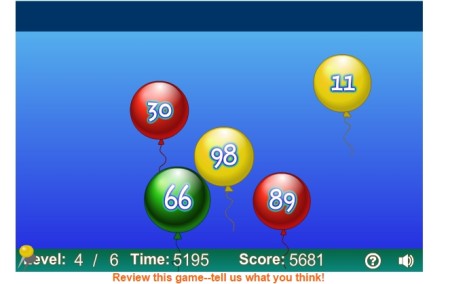 Next in this list of free online games to learn numbers up to 100 is Balloon Pop Math. The game enables you to learn numbers by hitting the balloons in the right order. Once you start playing the game, you will see balloons flying on your screen. Each of these balloons carries a number. You have to hit these balloons by clicking on them. While you are hitting these balloons make sure you hit the one that carries the lowest number first, and proceed upwards. If you click the balloon with a higher number first, a buzzer rings up indicating that you have hit the wrong balloon. So, make sure you hit the balloons in the right order and earn maximum points to register your place in the score sheet. This game has various levels. As you keep moving ahead in the game, you will see more and more balloons appearing on your screen. This is done to make things difficult for you and to see how good you are at identifying right numbers. 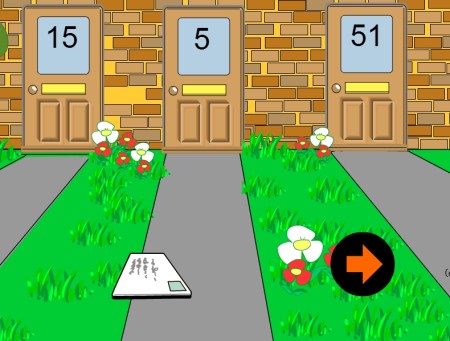 postletter is the final game that I have reviewed in this list of online games to learn numbers up to 100. This is the last and simplest game among all the games that I have reviewed here for you. The link above will guide you to the page where you can play this game. Make sure your speakers are on while playing this game; otherwise you will not be able to understand and play the game. The description of the game is fairly simple. You will see three doors on your screen, and each of these three doors carry a different number. There is also a letter that is placed in front of these doors. A voice in the background will tell you the number of the door to which you have to deliver the letter. Pick up the letter and deliver it to the right door. As simple as that. This is done to check out whether you remember and recognize the numbers or not. The numbers used in the game do not exceed 100.

All these games mentioned above have been designed in a manner to suit the interest of small kids. They are kept nice and simple, so that the kids can play them without any difficulty. So, get your kids to play these games and learn numbers up to 100.

You can also read our post on 5 Number Learning Apps For Android.