Here are some best free image perspective correction software for Windows for you to try. These software help you to correct an image’s perspective in a few clicks. No matter how tilted angle of the camera is, you will easily be able to correct the perspective of any image. These software take the source image from you and then with the help of some tools, allow you to fix the image. All these software support different image formats for correction and then let you save that image on your PC. In the following list, I will talk about 4 such software that can do that. And not just the image perspective correction, but you can use other tools as well that they offer.

Perspective of an image generally gets distorted by wrongly holding the camera while clicking a photo. And if you have some images like that, then you can use the following software to fix them. The following software mostly take an image, let you specify correct perspective as a reference and then you can save those images by correcting them. I have also added some image editor software in this list to do the same. 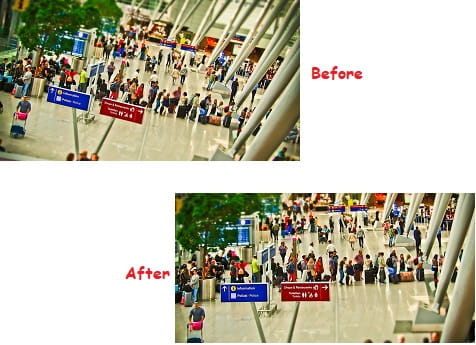 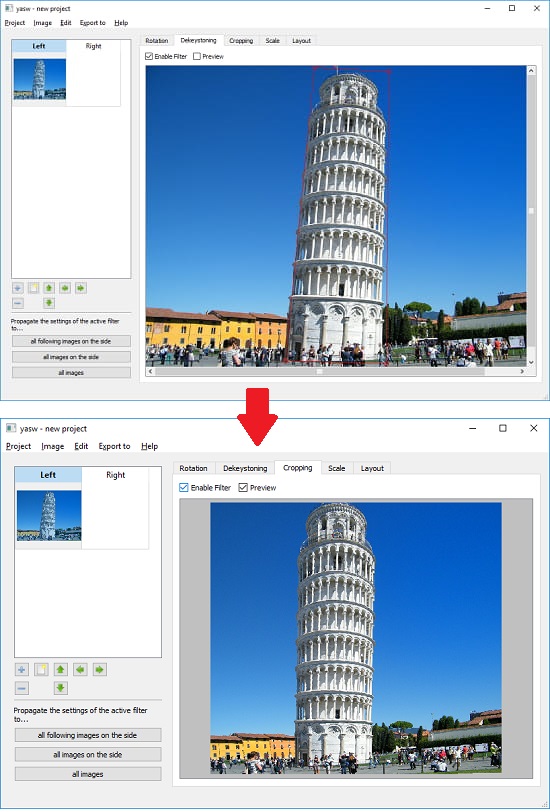 YASW, acronym for Yet Another Scan Wizard is one of the best free image perspective correction software for Windows that you can try. It is primarily meant for fixing the perspective of an image and you can easily do that. However, this software only supports JPG images. And you can process multiple images in it at the same time. It basically takes an image from you and then lets you specify a perspective by drawing a rectangular region. After that, it fixes the image accordingly. And after fixing an image, you can further use the crop tool to create the final image. In the end, when you are done with the image correction, you can save the image in JPG or PDF format.

You can get this software from this link and then run it right away. Use the Image > Add Image option to import an image from your PC that you want to fix. After that, go to the “Dekeystoning” tab and then draw a rectangle to specify a perspective. And it will use that to fix your image. After that, you can check the “Preview” option to see how the final image will look. Next, move to the “Cropping” tab and then clip out the unnecessary area from the image. Finally, now you have the corrected image that you can save on your PC. You can use the “Export to” menu of the software to save the corrected image as PDF or JPG. 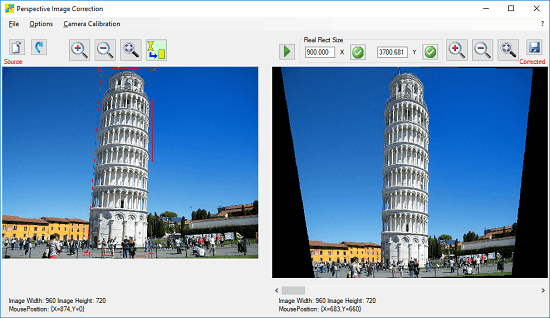 PerspectiveImageCorrection is another free image perspective correction software you can try on your PC. Just like the software above, it is a dedicated software to fix an image’s perspective. It allows you to fix an image’s perspective just like the above software. It first lets you draw a reference perspective to fix an image and then applies that on the input image. In addition to this, it also shows the preview of the final corrected image. And when you have got it right, you can save the changes and the image to any location on your PC. Here it even lets you manually fix the image by varying the X-Y coordinates. It offers you zoom like features too for analyzing the preview that it generates.

Get this software from the above URL and then install it on your PC. After that, open it up and then load the image in it that you want to correct. Now, draw a rectangle on the image for a reference perspective. After that, it will automatically show you the corrected image according to the reference you have drawn. If you are not still satisfied with the output, you can again correct the image by drawing a reference perspective. Finally, when you’ve got it right, you can hit the buttons with the check marks and save the image. It allows you to save the final corrected image in JPG, PNG, BMP, formats. 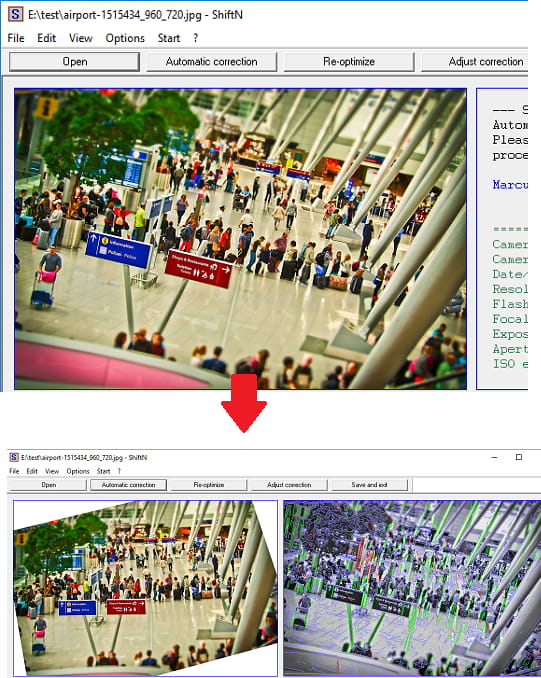 ShiftN is an intelligent image perspective correction software that you can use. Well, not exactly the perspective, but you can use this tool to fix tilted images. And the best part is that, it can automatically fix your image by using some intelligent algorithms. Also, it takes care of the cropping part by itself as well. You just have to open an image and then opt for automatic fixing of an image. It use lines and some other parameters to detect at how much angle the input image has to be rotated. It fixes your image and you can save that. And not just the automatic correction, but if you don’t want to go with the automatic adjustments and then you can opt to manually fix the perspective as well.

You can get this software from above URL and then install it on your PC. After that, you can open the target image in it that you want to fix. You can even drag and drop the input image on its interface as well. After the image opens, you can click on the “Automatic correction” button to automatically fix the image. It will take a few seconds to process it and will show you the corrected image. If you are satisfied with the result that it has produced, you can save the image. And if you want to go for the manual correction of the image, then you can hit the “Adjust correction” button. It will show you some options that you can configure to correct the input image. The options are mainly related to shift, rotation, distortion, etc.

GIMP is the best free alternative to Adobe Photoshop out there that you can use. It has almost all the tools of Photoshop in it and you can use it to deal with image processing and editing. One of the tools in GIMP is the “Perspective tool” that you can use to correct the perspective of skewed or improperly taken images. And to do that, you just have to do a few drag and drop operations to fix an image. However, the process is not very straightforward as it seems. To correct the perspective of an image in GIMP, you will have to use other tools of GIMP as well. And the following steps will guide you how to correct perspective of an image in GIMP. 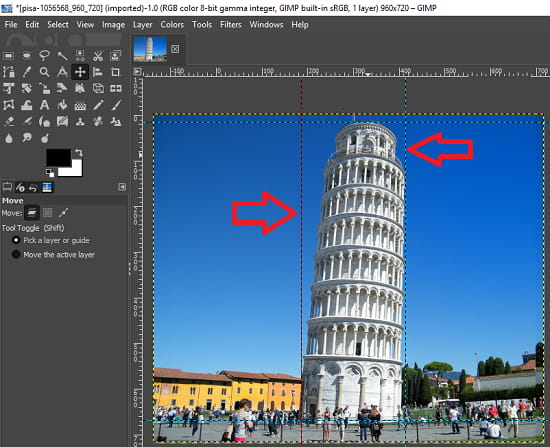 Step 2: Now, select the “Perspective tool” from the toolbox of GIMP. When the tool opens, you will see a dialog box on your screen that you can simply step aside. After that, you can use the drag operation at the corners or any other part of the image to fix the improper image. You can keep dragging the corners until the object gets aligned with the rulers that you added earlier. After that, hit the “Transform” button from the dialog box. See the below screenshot. 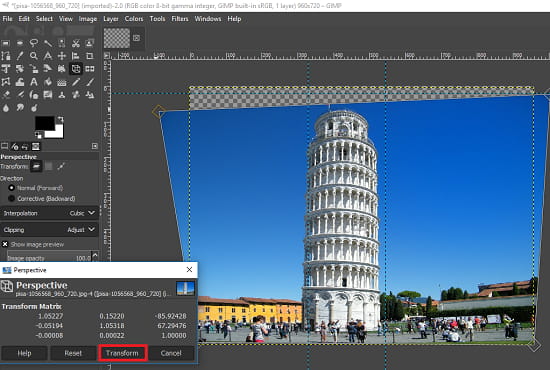 Step 3: Select the crop tool from the toolbox and crop out the unnecessary portion of the image. Now, finally, you will have the perspective fixed image that you can save on your PC. You can export this image using the File menu of GIMP. And you can save the image in any format you like. 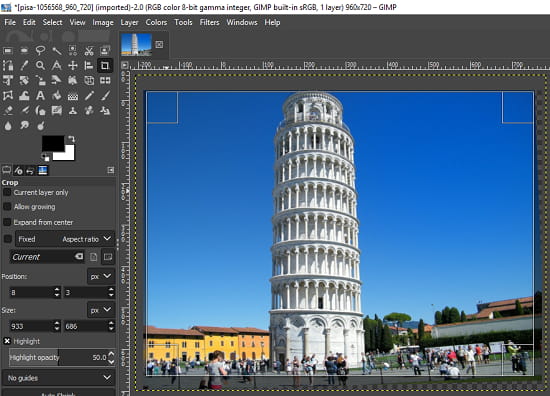 These are the best free image perspective correction software that I could find. You can use any tool from the above list and then correct perspective of any image in a few seconds. In my opinion, if you know about image editing then go with GIMP. Otherwise, you can use any other tool from this list as there is less effort required to fix an image’s perspective. So, if you’re looking for some free image perspective correction software, then this post will be a very useful one to you.