Here’s a list of 5 font apps for Android which can be used to change and apply a different font on your Android powered tablet or smartphone. Changing the font is something that can help a lot if you’re one of those who are interested in changing the appearance of the default Android theme that’s not all that appealing to be honest.

Let’s see what kind of font changer apps can be found in the Play Store. 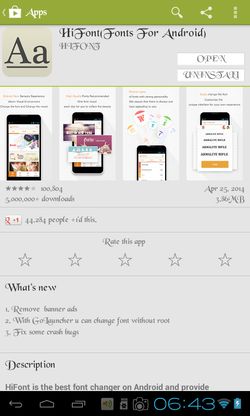 HiFont has a selection of hundreds of different fonts that you can download in a single tap. Each font can be previewed before its downloaded.

With this Android font app you also get to quickly and easily apply the downloaded font. Some devices might not be supported, and for some it might require root access, but as you can see from the screenshot above, the app really does work. After each change you’re required to reboot your device for the new font to start working. Default font is restored by tapping on the Local tab to access already installed fonts that are available on your device. 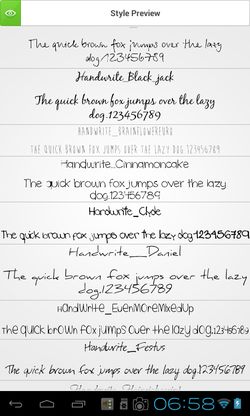 Here’s something for all the Samsung Galaxy owners out there, which is probably the most popular phone on the planet.

If you’re using one of the other apps from the list and there are problems changing font on Galaxy devices, you might want to try this font changer app that’s designed specifically for Samsung Galaxy owners. These are mostly handwriting type of fonts, but they are still worth checking out. 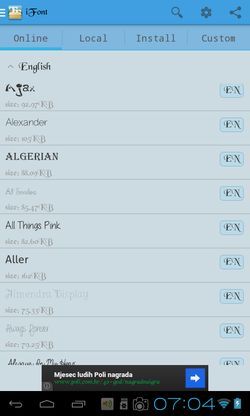 We can’t have a list of fonts apps for Android without mentioning the most popular font app, not just on Android, but iOS devices also.

iFont works similarly to HiFont. You get to download English, Korean, Japanese and Chinese fonts and then apply them to your phone. To revert back to the default font, use the Local tab to access available local fonts. 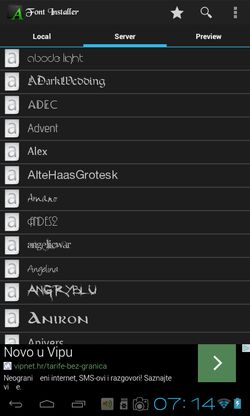 Font Installer offers a combination of font download (from its own servers) and font installation (from your phone or SD card).

Local installation is great if you have your own fonts that you’d like to install and use. Note that Font Installer requires root access and make sure that you backup existing fonts (top right corner menu), because otherwise you won’t be able to revert the changes made with Font Installer.

Get Font Installer by JRummy Apps. 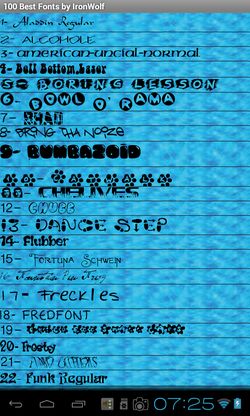 100 Best Fonts is not a font app for Android, but rather a font pack.

App won’t let you change the available fonts, you will need to change them with third party font changer app, like one of the 4 that we mentioned on this list. With app you install 100 different fonts all at once, without having to go through them one by one.

Get 100 Best Fonts by IronWolf.

We recommend HiFont and Font Installer because with them you’re covered for both font download and local font installation, from the device itself. Don’t forget 100 Best Fonts to quickly fill up your Android with fonts. Leave comments down below.