Here’s a list of 5 free Dj apps for Android which you can use to play the role of a DJ on your Android-powered phones and tablets. With the DJ apps that I mentioned in the list down below you won’t get the same kind of functionality that you would have by using desktop applications, but it’s still a nice way how to, if nothing else, at least kill time.

If you’re a DJ wannabe and you want to DJ even when on your Android phone, then have a look at the apps from the list down below. 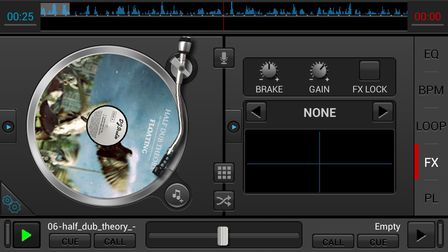 DJ Studio 5 has 2 decks where “records” can be played. By records, I’m of course, talking about the songs from the phone that you can load into the app. Note that the second deck is hidden by mixing options on the image above.

Each deck can hold 1 song. The small arrow, which can be seen on the sides of the app is for opening mixing options where you can play around with effects like Equalizer, looping, change speed (BPM) and more. As the song is playing you can scratch the “records” to produce that famous scratch effect that DJs are famous for. 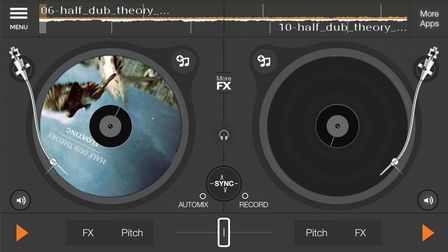 edjing is similar to DJ Studio 5, meaning it has a similar user interface, but there are a couple of differences.

2 decks are present here as well, but interface for loading songs is a bit different. Songs can be loaded from the local library or imported from SoundCloud and Deezer. To access effects and other mixing tools that are available you will need to press on the FX and Pitch buttons (the ones underneath the decks). Available effects include flanger, echo, pitch changes, cue point and more. 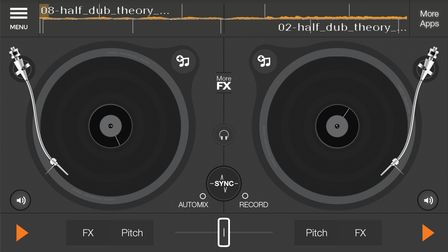 Party Mixer is in a lot of ways similar to the two previously mentioned DJ apps for Android.

It can also load two songs on the decks, there are several effects that you can use to mix music, for example, cross-fading, pitch, tempo and BMP mixing. For those who aren’t very good at mixing, there’s a feature called Auto DJ, which mixes songs automatically for you. 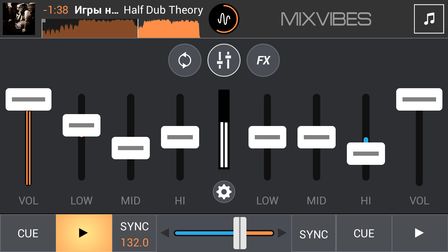 Cross DJ Free has a futuristic look and feel. “Records” don’t show album art of the songs you select but rather uniform colors.

Equalizer switcher, beat changer, effects and all the other tools for mixing music are easily accessible by tapping on the options around the records on the deck. They come up full screen, with the waveform of the currently playing music staying visible at the top. Records can be scratched and mixed songs recorded (saved) for sharing and listening later.

Also have a look at Best Free DJ Software for Windows: Kramixer DJ.

DJ Party Mixer works a bit differently from all 4 DJ apps that I mentioned up until now.

It doesn’t let you load your own songs, nor does it make it possible to record songs. Mixed songs can only be played and they are mixed using the 6 available loop slots. They can be turned on by tapping on the FX button. You can also change the volume, change loop that’s played for each of the 6 slots and more.

All 5 apps from the list above are impressive and I think that you can’t go wrong no matter which one you choose. DJ Party Mixer is a bit different from the rest, but it can still be used to create and play nice sounding beats. Let me know what you think in comments down below.