Droid Protector is a free Android app locker to lock apps, hide media files, fake cover, and many other amazing features. This Android app locker makes sure that all your apps and media files remain private, so that no one else can have a peek into them. The app supports two password modes: Pattern Lock and Classic Lock (Number lock).

Apart from just locking apps, you can also use this app to hide your photo and videos. The app lets you hide photos, videos individually or even by making folders.

The other cool feature of the app is Re-lock, which means that you can set a time interval after which app will be locked again, even if you have opened the app after drawing the pattern. 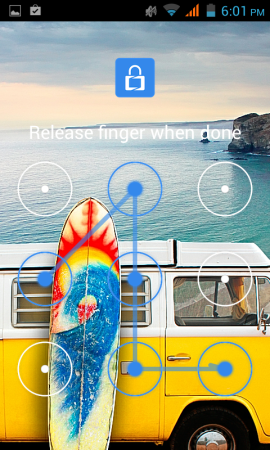 Note: The app also has a feature called Fake Cover which displays a fake message that App Has Crashed when you will launch any app. This is a paid feature and is limited to 1 app in the free version. If you specifically want this feature, then you can try Lockdown Pro app that provides this feature for free.

When you launch Droid Protector app for the first time, the app will ask you to setup the password mode for locking apps. You can choose from Classic or Pattern. The Classic lock consists of number lock, while the Pattern lock includes connecting dots into a specific pattern of your choice. 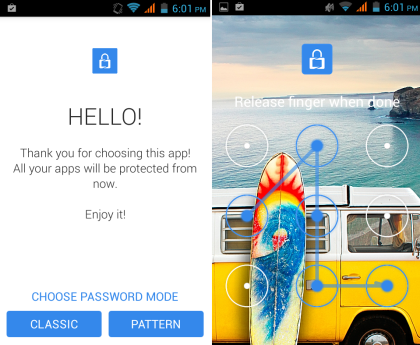 After setting the pattern, the app asks you to set a privacy question but its completely optional. You can choose to skip this step. Next, you will see the interface shown below. You can see the list of all apps installed on your device, including system apps. To set lock for any app, just tap on the lock icon in front of it. The locked app’s icon will be highlighted in Blue color. 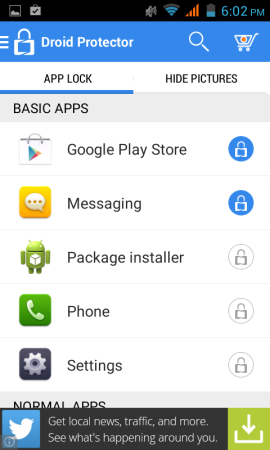 For hiding photos and videos, tap on Hide Pictures option. It will open the interface shown below with three options at top: Choose Photos/Videos, Create Folder, and Camera. 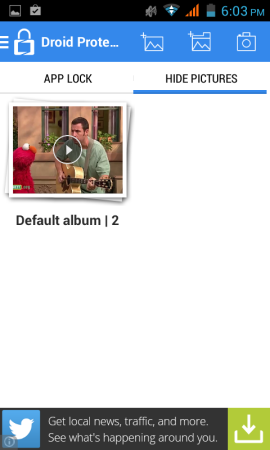 The other options of this Android app locker can be accessed by tapping on the icon at top left corner. It has following options: Settings, Password, Fake Cover, and Lock Screen. 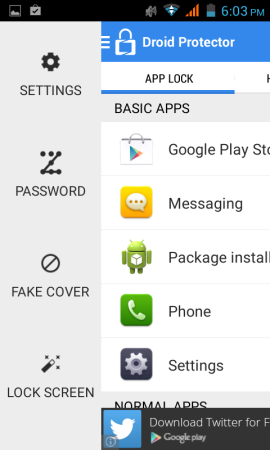 You may also like: 5 Free Best Android Lock Pattern Apps.

Droid Protector is a cool Android app locker which also supports picture and video hiding. The app is very easy to use and supports two password modes. I also liked the feature of setting custom lockscreen wallpaper. The only thing which I wished that they should provide at least 3-5 apps for Fake Cover mode in the free version. Do try it.