Finger Slayer, is a Windows 8 free game app, that is made to test your reaction time. The game is super fun and challenging. Well, it is a Windows 8 version of popular iOS game app by the same name Finger Slayer, but has one more gameplay along with the original. This is the official Finger Slayer game app for Windows 8, and is developed by the RV AppStudios. The gameplay is same as original game, and that is to save the finger by removing off your finger (the character you play as) before the razor-sharp guillotine blade cuts you off. 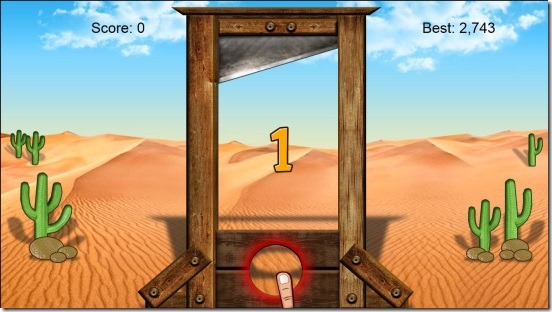 Gameplay of this Windows 8  free game:

Playing this Windows 8 free game is sure fun. I love the fact that the game is plain simple, there’s nothing else but just removing your finger before it cuts you. No hidden twist and turns, still the game is far better than most the Windows 8 game apps. It’s unique in it’s own sense, and will really get you involved in the game. The game controls are too simple.

There are two game modes in this Windows 8 free game app. The first is the original that made the game huge hit and it’s called Classic Game. 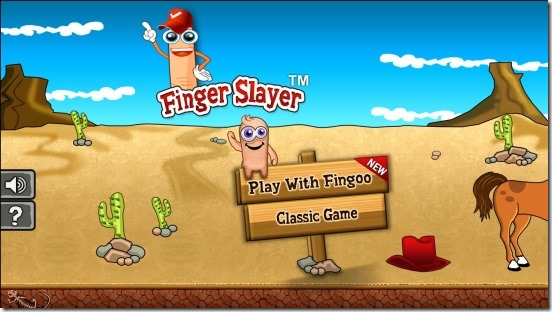 In this game mode, everything is just the same. You’ll  get a guillotine somewhere in the middle of desert. The gameplay is to put you finger in the guillotine circle by click-holding left mouse button, and wait for the 3, 2, 1 and Go countdown. The second Go count vanishes from the screen, the guillotine blade drops down with the speed of light. All you have to do, is remove your finger as fast as possible by releasing the pressed mouse, before it cut’s your finger off. If you managed to remove your finger in right time, then you’ll get score according to the time you kept your finger between the Go count time and the time the blade drops. That is, the longer you waited till the blade drops the higher scores you get. So a very sharp eye and quick reaction are the two requisites of this Windows 8 free game. Remove finger in time, get scores and the game repeats itself. 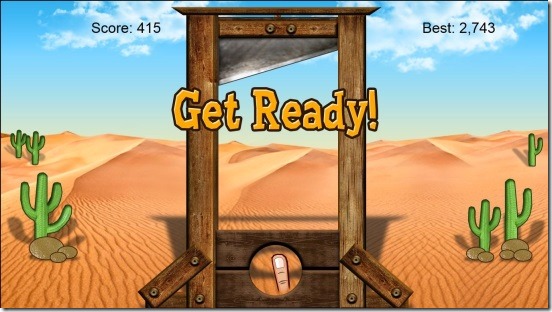 The second game mode follows footsteps of the classic game, and is called Play With Fingoo. But here in place of simply removing finger off the screen, you have to dodge the three dropping guillotine blades, and you also have to collect 3 types of coins to improve your score. All you have to do is click-drag to dodge blades and collect coins. That’s pretty much it. 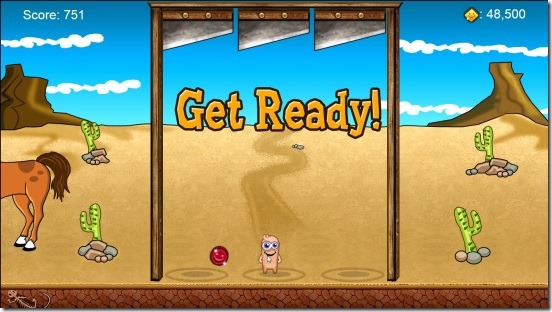 The gameplay is what makes the game super fun. The game continues until your finger doesn’t gets cut off. The graphics good and the sounds are quite realistic. The game ending is also pretty nice, with the whole screen getting covered by blood. 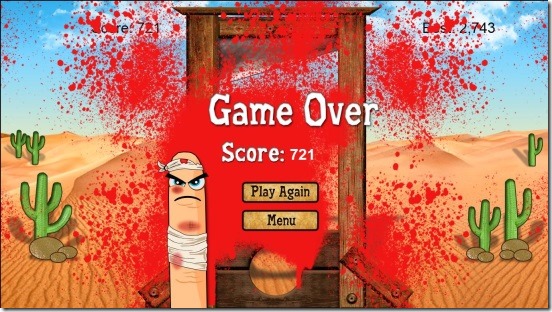 If you are into cuts, bloods, and real action then do check these Windows 8 action game apps: Judge Dredd vs. Zombies, Zombie HQ, and Running Dude.