Task Manager is a free Firefox add-on to check memory and CPU usage in Firefox. It is a third party add-on but very much similar to inbuilt task manager of Google Chrome, so you can now get a Google Task Manager like feature in Firefox.

How To Check Memory And CPU Usage of Each Tab In Firefox:

Task Manager is a very useful add-on that allows us to see memory and CPU usage in Firefox. And, it also lets us to close tabs directly from the task manager.

Task manager can be easily added from Mozilla Add-ons or the link provided at the end of this review. As soon as you add the Task manager add-on, its icon appears in toolbar. Task manager can be opened by clicking on its icon in the toolbar. This opens up a new window with the list of all active tabs and add-ons. Every line has a checkbox in front of them which are used to select processes. Each line also shows the amount of Memory being used by that tab or add-on. It also shows Processes, CPU %, System %, and Process memory for that tab or add-on. 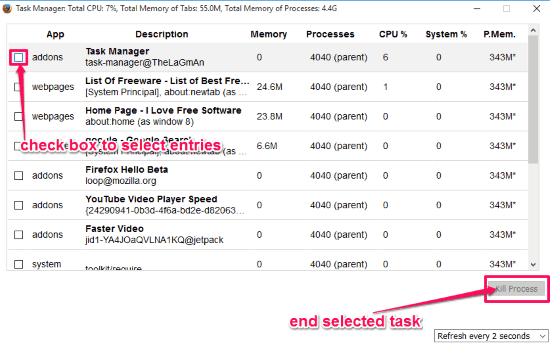 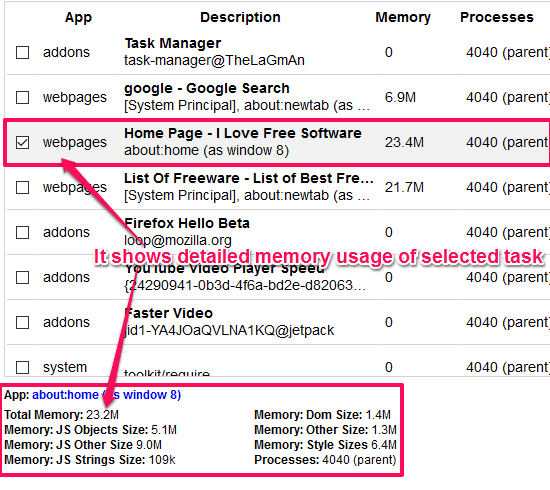 You can also set the time of refreshing Task Manager from the drop-down on the bottom right of its window. You can choose among, 1, 2, 3, 4, 5, and 10 seconds for refreshing interval of the Task Manager Window.

Task Manager is a very useful add-on as it helps in managing tabs and add-ons on Firefox as it doesn’t have inbuilt task manager. It worked really good during my use, however I would have liked it more, if it allowed multiple task kills at a time. I hope the developer team of Task manager is working on it.