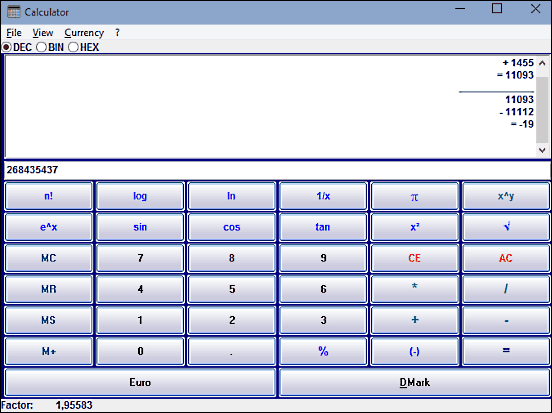 Alternate Calculator is a simple and easy to use scientific calculator software for Windows 10. True, it’s not exactly the most feature heavy application out there, and the user interface is a bit dated, but Alternate Calculator does all the basics, and does them pretty well. The usage of the program is a pretty simple affair. Simply press the buttons to enter the expression(s) that you need to evaluate, hit the result (=) button, and the output is displayed in the result pane. The values can be entered in a number of modes (decimal, binary and hexadecimal). Alternate Calculator can evaluate the expressions continuously (the next input can be directly used with the previous output), and the output is displayed in order. The application includes all standard scientific functions like trigonometric, logarithmic, exponential, factorial etc. Apart from that, Alternate Calculator also includes a currency converter that lets you define custom currencies, which can be used in the calculations. Read more about it here. 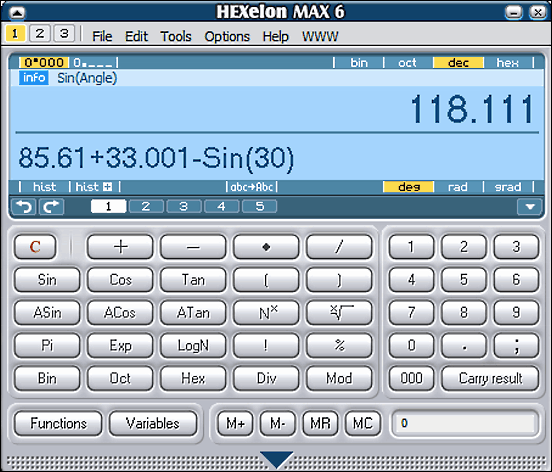 If you want a feature loaded yet lightweight scientific calculator software for Windows 10, look no further than HEXelon MAX. This application has a pretty slick looking user interface, and its memory footprint is next to nothing. But make no mistake about it, HEXelon MAX is one powerful scientific calculator program. The application includes a multi-line display for showing both the input expressions, as well as the calculated output. It also has handy shortcuts to change common settings (e.g. positional number system, undo and redo the last expressions). HEXelon MAX includes a whole lot of scientific functions (trigonometric, permutation and combinational, logarithmic, to name a few). Apart from that, there are also advanced bit shifting functions. This thing even lets you define custom functions and variables and use them in the calculations. And that’s not all. HEXelon MAX comes with a currency converter and unit converter as well. As far as the usage of the application is concerned, things are pretty basic. Use either the virtual buttons (or the keyboard) to enter the expression, and HEXelon MAX will generate the output in real-time. You can even save the history of results so that it can be used later. And, it’s portable too. 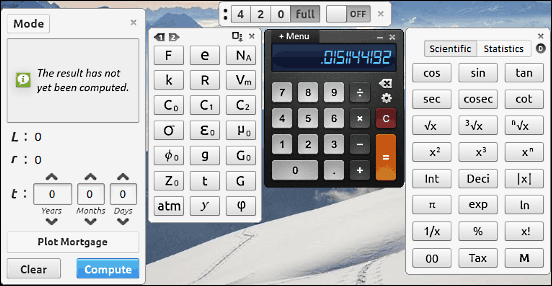 One of the most gorgeously designed applications that you’ll ever see, Reor is an ultra powerful scientific calculator software for Windows 10. No seriously, this thing is one heck of a looker. But in addition to the visual goodness, Reor has all the features that you’d expect from a scientific calculator application, and then some more. However, the way those features are integrated into the application makes Reor unique in its own right. When you launch the application, you’d see nothing but a basic on-screen calculator. However, hit the “Menu” button on the top left corner of the calculator, and all the bells and whistles that Reor has to offer will be displayed in a gorgeous full screen overlay, easily accessible from their individual bubble shaped shortcuts. Click on a bubble (say scientific), and the sub-module having scientific functions (Sin, Cos etc.) will pop up. This modular design is what makes Reor both a breeze to use, because it can be as simple and complicated as you want it to be. As far as the functions this thing comes with are concerned, there’s a whole laundry list. Statistical, financial, variables, constants, graphing; the list goes on. And of course, the unit converter and format chooser modules are there as well. 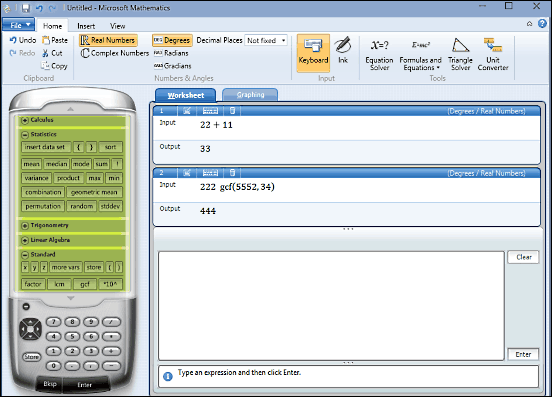 Of all the applications discussed so far, I’m pretty sure few would run as well as Microsoft Mathematics, a scientific calculator software for Windows 10 that comes straight from the developer of the OS itself. That being said, let me make it clear; Microsoft Mathematics is not for the weak hearted folks. That’s because it’s a ridiculously feature laden program that totes more goodies than you’ll ever be able to use. The UI of Microsoft Mathematics features a large skeumorphic calculator in the left, with a long virtual display that is overloaded with all sorts of scientific functions. These functions are organized into expandable sub-categories like Trigonometry, Linear Algebra, Logical functions, LCM, GCF, Calculus, Statistics, and what not. You can easily use these functions by simply clicking on them, and the numerical values to be combined with them to form the input expressions can be entered via the calculator’s virtual keypad. Whatever you enter is displayed in the right pane on the active worksheet, which logs every single expression and its output. You can edit individual entries, and delete them as well. And if that’s not enough, there’s always the “Ribbon” menu, which includes a ton of other options, such as an equation solver, triangle solver, unit converter, and then some more. I’m telling you, this is one seriously capable scientific calculator software. Find out more about it here. 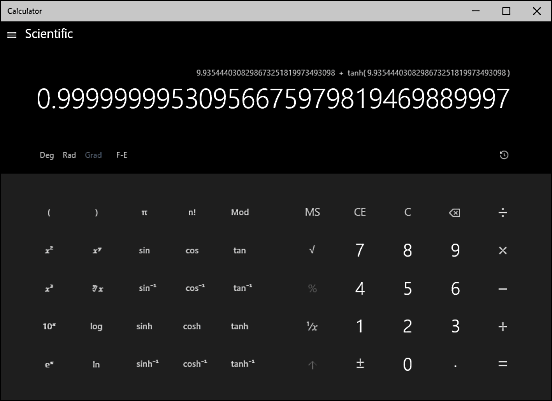 Rounding off the list is an application that’s unique, in the sense that you don’t need to download and hence, install it. That’s because it’s a part of the Operating System itself. My friends, I’m talking about the native Windows Calculator application. Completely revamped for Windows 10 and now a stunning looking modern app, Windows Calculator is the perfect scientific calculator software for Windows 10. It’s fully resizable, and has a bunch of different working modes (Standard, Scientific, Programmer) with most (if not all) the scientific functions that you need. Simply use the hamburger icon to toggle the scientific or programmer mode, and get instant answers to those complicated expressions. Everything from trigonometric to logarithmic functions is built right-in. But that’s not the end of it. Windows Calculator now also includes a built-in unit converter (accessible via the hamburger menu), which lets you convert everything from temperature to pressure to data. If you don’t want to bother with downloading and installing a third party application, Windows Calculator is just what you need.

Scientific calculators have always been widely used, and that’s still the case. However, the fact that we spend a whole lot of time working on our computers makes it pretty important to have a capable scientific calculator software up and running on our PCs at all times. And for that, the above discussed applications will work just perfect. Try them out, and let me know your favorites in the comments below.