How To Use This Free Alternative To Windows Calculator With Currency Converter?

Before using Alternate Calculator, the first step is obviously to install it. Installation is a standard affair. All you have to do is download the ultra-lightweight (just about 650 KB) application from its homepage, install it, and you’re good to go. Here’s how Alternate Calculator looks like, once launched: 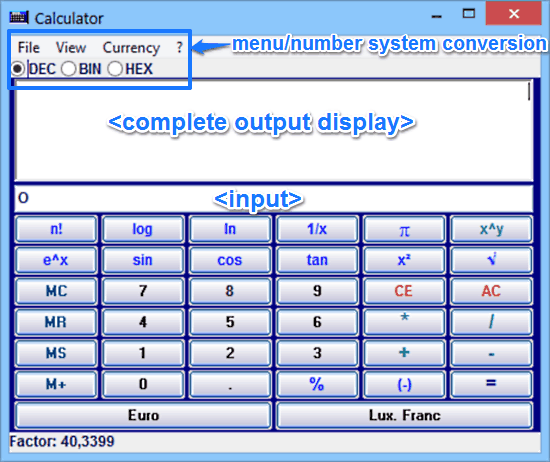 As illustrated by the above screenshot, Alternate Calculator sports an exceedingly simple and straightforward user interface. For all intents and purposes, it looks just like a calculator. One of the best features about Alternate Calculator’s UI is that it’s responsive. This means that you can freely resize it, and the keys, display etc. will scale to adjust to the new size. The UI is composed of virtual buttons (numbers, exponential and trigonometric functions, memory options, and stuff like that!), along with a input field where input values appear step-by-step. Above that, there’s a bigger output box that displays complete output of the calculations in a cumulative fashion. A simple menu, and radio buttons for choosing out of the three available number systems round-off Alternate Calculator’s UI. Not that complicated, right?

Using Alternate Calculator is just like using any other software based calculator. All you have to do is enter the expressions that you want to evaluate using the virtual keys of the application (you know, by pressing the keys via the mouse pointer), and well, hit the = key (or the Enter key on your keyboard) to get the result (You weren’t expecting a detailed “step by step” tutorial for this, were you?).

As mentioned in the beginning of the article, Alternate Converter also features a built-in currency converter (or editor) that gives the reference exchange rates of some ex-currencies of European nations with respect to the current Euro. Here’s how to use this feature:

Step 2: Simply enter the desired value of the currency, and hit the Euro button to see its exchange rate with reference to Euro. If you want you can also use the currency editor to specify your own currency combinations. How cool is that? 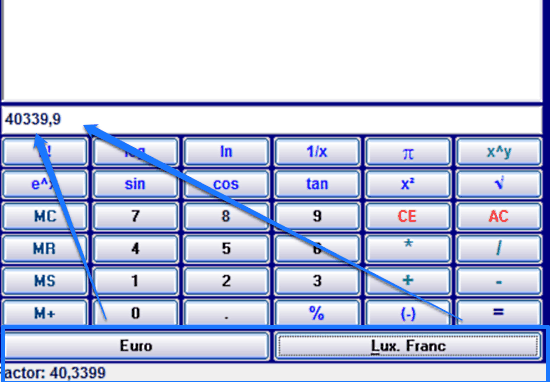 Alternate Calculator is a free alternative to Windows Calculator with currency converter. It’s simple, easy to use, and has all the standard functions of a regular software based calculator application. Goodies like a simple scalable UI, trigonometric and exponential functions and most importantly, the built-in currency converter make it quite a worthy application. Do give it a try, and let me know your thoughts in the comments below.