Here’s a list of 4 free font creator software for Windows 10 which you can use to create your very own fonts. Having a custom font is something that’s a nice thing to have. If nothing else then just to give documents or graphics that you create your own personal touch. Software from the list down below lets you do just that. Using this software you’ll be able to draw each letter of an entirely new font, save it, use it on your system or share it with others so that they use it on their computers. Majority of world languages and character sets are supported by all of the applications that I tested. Let’s see what exactly it is that’s available. 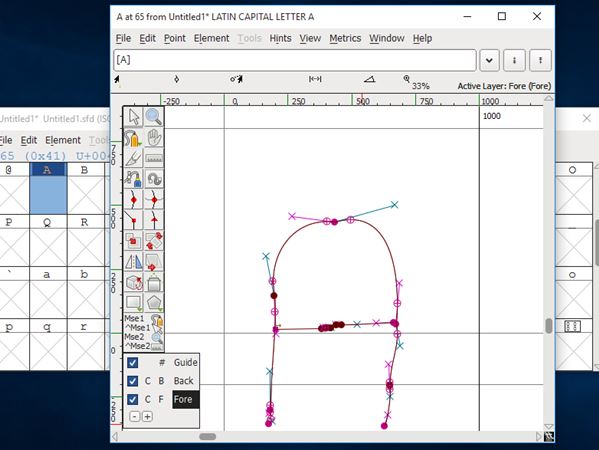 First thing that you’ll see after starting a project is a table that contains an alphabet for the selected language. Your job is to double click on each character, each letter and draw your own version of it, like I’m doing for the letter A on the image above. That’s how a font is created. Tools for drawing fonts include the usual graphics toolset, freehand pen tool, paths tool, shapes, etc. Supported formats include TTF, TTC, BDF, OTF, OTD, FON, FNT, and even SVG and UFO. Its own native format is SFD. 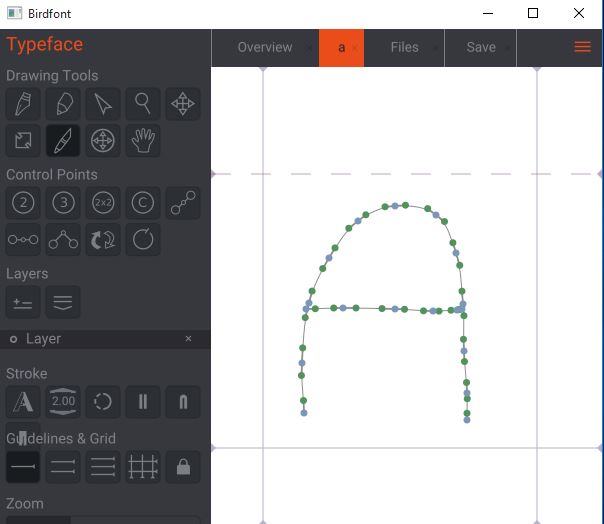 BirdFont is another font creator software that works under Linux, Mac and Windows, including Windows 10. Similarly to FontForge, after starting BirdFont, you’re going to have to open up an existing font or create a new one. In either case you’ll see a table made up of letters of the selected language alphabet.

To create fonts on Windows 10 using this font creator, each letter needs to be selected and a custom font character drawn for it. Drawing toolbox has a decent selection of tools that allow you to create paths, multi-point Bezier curves, freehand drawing is supported, as are shapes. Guidelines and grids help make drawings more accurate. Format support isn’t as good as it is in FontForge. Only TTF, EOT and SVG file formats are supported. Interface of BirdFont is much more modern looking, which is a plus. Note that if you want to download it for free, just put 0$ in the “how much you want to pay” field at the last step of the download.

Also have a look at Online GIF Editor to Insert Text, Image, Reverse, Resize a GIF. 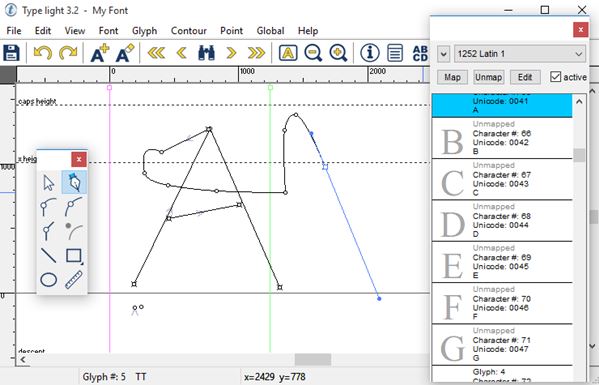 Type Light really is true to its name seeing how its one of the most lightweight font creator software for Windows 10 that I tested. It’s just a bit over 2MB in size, but despite that it has a lot to offer. This font creator supports TTF and OTF font file formats.

After launching the application you will need to select “File >> New” in order to start creating a new font. List of font characters, for the selected alphabet, is show in a pop-out window. You need to create your own version of each character before saving the font. Drawing toolbox is a bit smaller than in BirdFont and FontForge. This is no surprise considering how lightweight Type Light is. You still get a pen tool, paths creator and a shapes tool. To save a finished font select “File >> Save”. 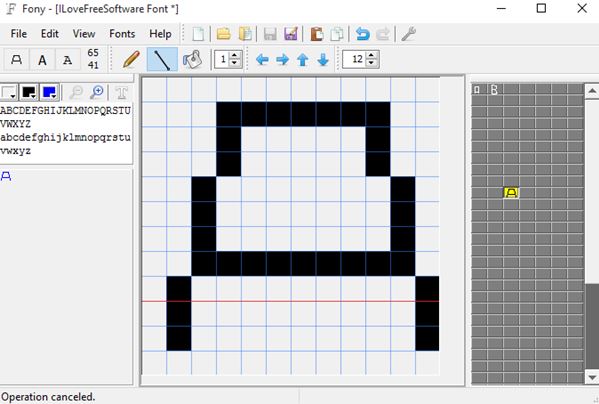 Fony is an even more simpler and lighter font creator software than Type Light, with a size that’s just around 1.5MB. Given it has such a small size you can’t really expect much when it comes to features. One major drawback of this Windows 10 font creator is that it only supports raster graphics.

What this means is that you can’t create those smooth curves like you can in the previously mentioned applications. Only “pixels” can be manipulated in order to create fonts, which means that the end result are fonts that aren’t as smooth like fonts that we’ve got used to seeing. Interface is very simple. New fonts can be created by selecting “File >> New”. Freehand pen tool, line tool and a bucket fill tools are available. Sidebar on the right is the alphabet table. Note that letters actually start somewhere around the center square, see image above. Left sidebar has the font preview. Center area is reserved for drawing.

If I had to pick a favorite from the list of font creator software for Windows 10 above, I would have to say that it’s a draw between FontForge and BirdFont with TypeLight coming in close in second place. FontForge wins hands down when it comes to things like available tools and format support. BirdFont on the other hand has a better, more clearer, interface. Choose which ever one suits your needs better. Type Light is great for those who don’t need the advanced functionality found in the two applications that I previously mentioned. As always leave comments down below with your thought and suggestions.