about:Addons-memory is a free Firefox addon which allows you to view memory usage of addons that you have added to your web browser. Title of this free addon memory usage monitor is a bit odd, that’s because after you install it, about:addons-memory adds a page similar to the about:config. That’s from where the name of the addon comes from, it is actually a command which you run in your browser’s address bar and the page that you get then reports back memory usage. 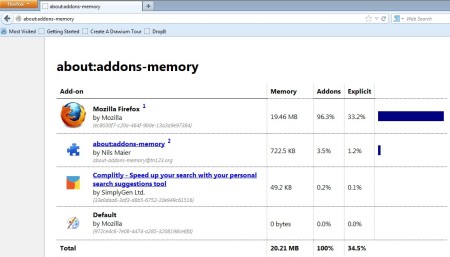 Screenshot of about:addons-memory can be seen on the image above. You just get a list, where all the addons are listed. Columns with different stats about the memory usage can be seen on the right. Firefox memory usage is also available here, but it’s only of the core application. Actual memory usage might be different depending on the number of tabs that you have running. Another thing you should know is that some of the memory usage of active addons is counted directly in the web browser executable, so what you see reported might not be proper values. Key features of this free memory usage addon for Firefox are:

Firefox can sometimes be slow, and one of the reasons why it can be slow are addons. Most of us have at least one addon installed, and depending on what it does, it might be responsible for sluggishness that you experience. Here’s a few pointers to help you get started.

How to check memory usage of addons in Firefox with about:addons-memory

about:addons-memory can be installed like every other, the only difference is that you do not require to restart, which is not the case with every addon. After installation you’re gonna have to copy and paste or type out the title of this free addon memory usage monitor for Firefox inside the address bar:

After you do that, down below you’re gonna see a list of all the addons that you have installed, and right of them the statistics of how much memory is in use. Like we already mentioned, both total memory of the web browser and of each individual addon can be seen in both amount of RAM that’s being used up and in percentage of the total browser usage. 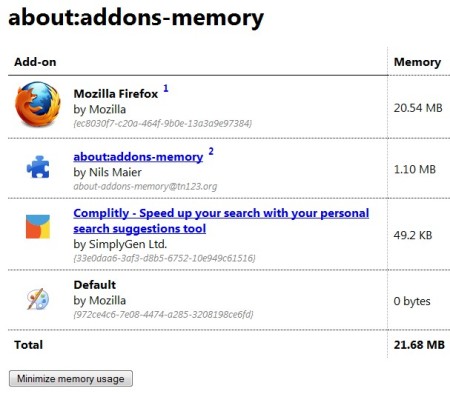 Button for minimizing the memory usage is available all the way at the bottom of the list. Clicking on it will initiate the optimization and you should see decreased usage afterwards.

Viewing memory usage is very easy with about:addons-memory. If you’re having problems with Firefox being slow, addons might be the guilty party. Give it a try and see how much memory is being eaten up by addons, you might find some that you don’t need and speed up Firefox. Free download.