We recently covered how to check memory usage of Chrome extensions. Unfortunately, something similar does not exists for Firefox. Thankfully, now there is a Firefox extension that lets view memory usage of various add-ons of Firefox.

This Firefox plugin, called “about:addons-memory”, shows you RAM usage of all the installed Firefox add-ons. Just install this plugin and see memory usage of all add-ons. 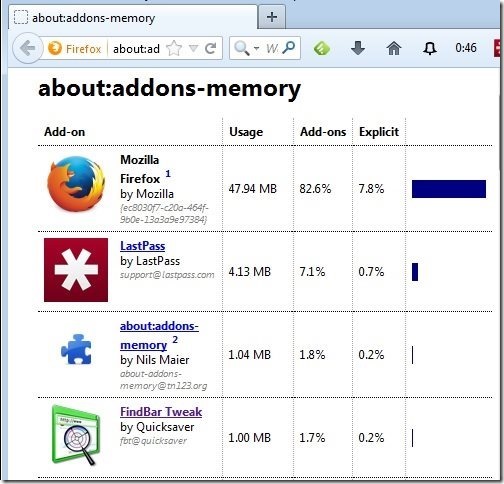 Unlike other Firefox add-ons that show an icon in Firefox once installed, this plugin doesn’t do that. In fact, once installed, you won’t even be able to come to know that it is there. To use this add-on and see memory usage, you will need to open a new tab page and type “about:addons-memory” in that.

Once you do that, you will be able to see all your installed add-ons, alongwith their memory usage. It also shows that out of entire memory being used by all the add-ons, what percentage of memory is a particular add-on using. The add-ons are sorted according to their memory consumption. There is no other sorting option available, like, you cannot sort by name.

A Note of Caution:

Now, even though this add-on shows memory usage of all add-ons, the information it shows might not be accurate. Some add-ons might add features, scripts, etc. directly to the browser and it might be difficult to find if that feature is a part of browser or has been added by some add-on. In such cases, the add-on memory consumption might show to be pretty less, even though the add-on might be using lot of memory.

Also, note that if an add-on uses just a few MBs of RAM, it is not a problem. Unless some add-on starts using too much RAM, you don’t need to worry about it. So, if you see some add-on with just 40-50 MB RAM usage, you can safely ignore it (unless you think that the add-on has added some scripts to Firefox as well that are not being included in memory consumption calculation).

This is a pretty nice add-on for Firefox that lets you quickly see how much RAM is being used by different Firefox add-ons. However, I don’t like the fact that it doesn’t adds any icon or menu option to see the memory usage; instead, you have to remember the exact text “about:addons-memory” that you have to type in your browser to see memory consumption. Still, for lack of anything similar out there, I suggest you go ahead and give it a shot.