Politicians and controversies over what they say or tweet are not a new thing. But sometimes you come to know about a Twitter controversy a little later. Then the first thing you do is go to the Twitter account of the person involved to check out the tweet which started the whole issue. But you can’t find it there anymore. It was deleted from the account by the account holder. But you still want to check out the tweet which was made. Now how do you read tweets that were deleted by politicians, easy you simply go to Politwoops. 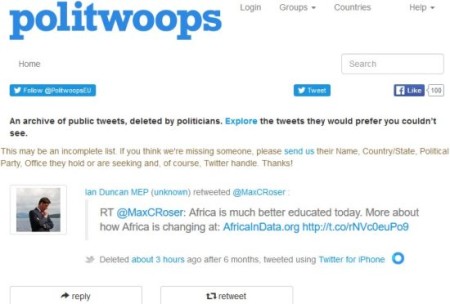 When you go to the home page of this website, you will see what you see on the screenshot above. Here you will find tweets that were made and deleted afterwards by various politicians from different countries.

Each tweet will have three options with it as shown in the screenshot below, they are:

If you want to know which language the tweet was made in, you can so that as well on the Google translate page by pressing the detect language button.

You can also go to the country tab at the top of the page, which will list all the countries for which the website has tweets available. You can select a particular country and you will be shown tweets from the politicians belonging to that country only.

Politwoops is a fun website, where you can find tweets which were made and then deleted by politicians of your country. Apart from your country you will also find a lot of other countries listed here. So in case you missed on the fun when it happened, you can always catch up by paying a visit to this website.