Here is a free iPhone app to turn songs into playable loops and one-shots: Jammer. Actually, when you choose a song, this app divides the entire track into loops and one-shots such that you can play the song by tapping on them instead of playing the song directly. The playable loops will be shown as circles on the screen which you can tap to start playing them continuously. Whereas, the one-shots will be visible as squares which you can tap to play once. You can also repeat one-shots for as many times as you want to add a trance effect.

It offers some free songs like Need to Know, Undertow, etc. which you can turn into playable loops and one-shots. Apart from that, it also comes with a store where you will be able to purchase all your favorite songs and play them as musical instruments. Similar to some of the other interesting iPhone apps which allow you to convert guitar tabs into sheet music, make mixes with Spotify songs, etc., “Jammer” is also very fun and interesting to use.

How to Turn Songs into Playable Loops and One-Shots on iPhone:

To get started, simply install “Jammer” on your iPhone and open it up. When you do that, you will be able to see all the free songs offered by this app on the main screen. 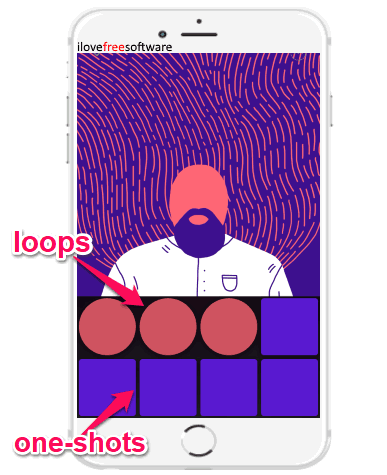 Now, you can start playing the selected songs with the help of these playable loops and one-shots. This app usually divides the music part of the songs into loops and the lyrics part into one-shots. When you tap on a circle, it will start playing the music loop continuously. It will keep playing until you tap on it again to stop. If you tap on the any of the squares, then it will play one part of the song lyrics which is assigned to that particular one-shot.

You can also apply a trance effect to the playback using the one-shots. To do this, all you need to do is tap and hold on any of the squares. This will play that particular one-shot in a trance sequence.

You can also share the songs which you have turned into playable loops and one-shots with others. For this, simply tap on the “Dotted” icon at the top and then choose the “Share this song” option. The user can directly use the link of the shared song to start playing it right away. Do note that the users with whom you have shared the song must have Jammer installed on their iPhone to play it. 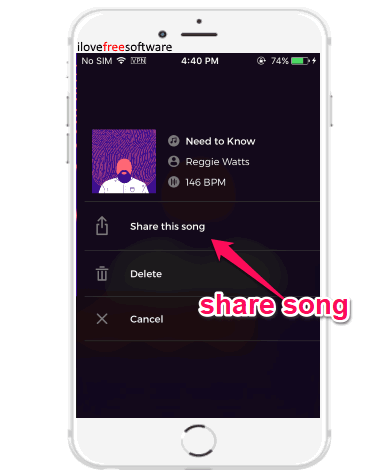 If you would like to use more songs, then you can go to the in-app “Music Store” icon and then buy the song. The first 30 seconds of the songs can be played for free.

Jammer is a pretty unique and interesting app which helps you turn your boring songs into something interesting. Instead of playing songs directly, you can now manually play them using loops and one-shots. Personally, I like it as it is very fun to use and it feels like you’re playing a musical instrument.

Get “Jammer” from here