Pacemaker is a free iPhone app to create mixes from Spotify music. You can also select tracks from your music library to mix with Spotify tracks and create an awesome mixtape. Basically, Pacemaker is a music community app where users can mix Spotify tracks together and share with the whole community and save the created mixtapes in the app itself. This means you won’t be able to download the created sound mixes of Spotify tracks but you can always listen to the saved mixtapes even if you are not connected to the internet. In addition to this, its editing interface makes the music editing very easy, you just have to select Spotify songs and then mix them together. You can also adjust the volumes of different tracks at different points like a pro.

Note: In the free version of this app, you get around 500 sessions to mix Spotify tracks. As it was not clearly mentioned on Pacemaker website and blog, I am not sure whether you will get a total or 500 sessions or if it’s just a monthly or periodic limit. 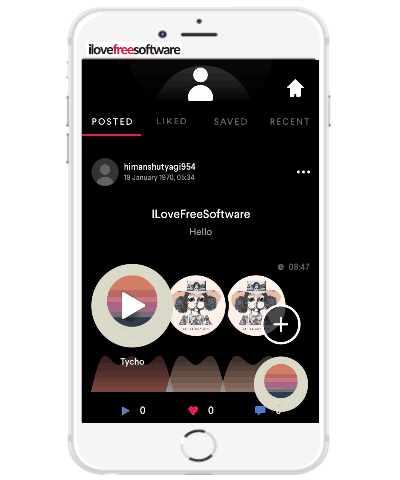 Spotify is indeed one of the most popular online music streaming platform right now and if you are one of those who loves to stream music over it then you should check out any of these Android Spotify apps and if you are iPhone user then you can check out Listn. What Pacemaker allows you to do is play with the Spotify tracks and you can mix your favorite tracks to create another awesome mixtape that you can listen and even share with other users.

How to use this free iPhone app to create mixes from Spotify music:

Getting started with Pacemaker is very easy; install it from the link at the end of this review and then open it. After that, you need to create a free account on it or you can easily sign up with your Facebook account. Next, you need to log in with your Spotify account to select songs from it. After that, you can simply use it to mix Spotify tracks, and as I mentioned, you can also select tracks from your iPhone to mix them. Once done, you can either publish them on Pacemaker community or save them. If you save a mixtape, then you can listen to it even in the offline mode but can only be accessed within the app.

Step 1: Open Pacemaker and tap on the “+” button to create a new mixtape. It then prompts you to select a song from Spotify playlists or you can even search and select a track from one of your favorite artists. 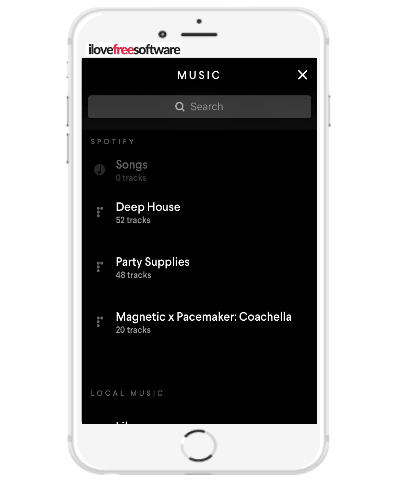 Step 2: Once you have selected a song, a screen will appear, as shown in the screenshot below. Now, tap on “+” button to add more songs from Spotify or local music library of your iPhone. To start mixing, play the songs that you want to mix, and then long tap on the waveform of the song to be mixed. While holding the long tap, move the song waveform onto the track in which you want to mix it. That’s all you have to do to mix tracks, but a lot more work is required to maintain the rhythm and flow of the mixed tracks, so as to make them sound like professional mixtapes, and not just a piece of noise. 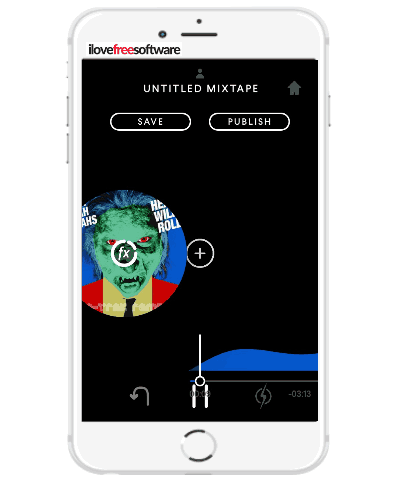 To tune up the mixing, tap on the waveform part where the waveforms of both the tracks share the common region. This will zoom in the player and you can now control the volume level of each track by the volume sliders, as shown in the screenshot below. You can also extend the region of mixing and then adjust the volume level of each track. In case you made a mistake, there is an option to revert the actions as well; just tap on the Undo button. 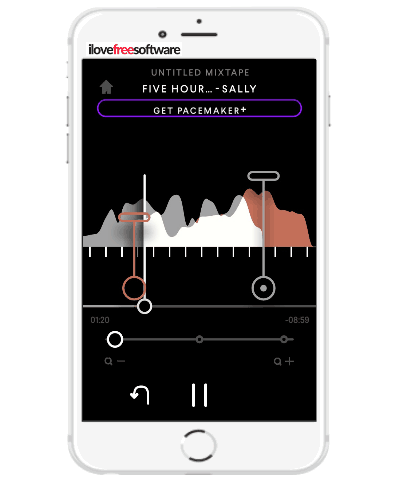 Pacemaker is a free iPhone app to mix Spotify music and create custom mixtapes that can be shared with the online community of Pacemaker and even in the app to access it even in the offline mode. I really liked this app. Just mix as many Spotify tracks as you want and create a mixtape that will sound like a pro.