Here is a list of 6 Android apps that let you check FIFA World Cup 2014 Scores live.

Now that FIFA World Cup is starting, all the fans want to keep track of scores LiVE. In this list, I am going to review some Android apps that’ll help you remain updated with the live scores and recent happenings at the World Cup.

If you don’t have Android phones, you can checkout live World Cup scores on FIFA extensions for Google Chrome or FIFA apps for iPhone. 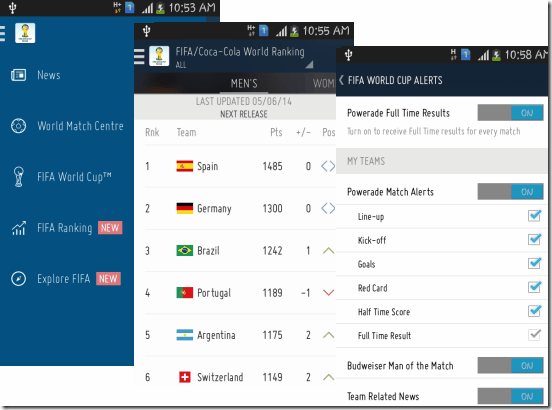 FIFA is an official app for World Cup 2014, that provides you live coverage and in-app access to World Cup 2014 breaking news, standings, teams, groups, etc. during the tournament.

You can choose your favorite teams for which you can get real time notification/alerts of line-up, kick-off, Red card, half time, etc.

You can enter the stadium to keep an eye on the action of the match. Not only that, you can analyze the statistics as well.

It provides you details of the stadiums and the cities in detailed guide. It shows which all teams are qualified to play further.

Click here for the detailed review, or scan the QR code below: 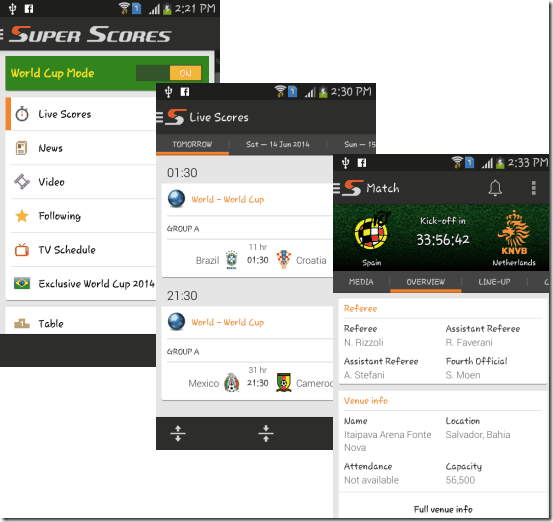 Super Scores – World Cup 2014 is another live Football score app that provide you live scores, latest news, statistics, and a lot more. You can set notifications for Goals, Start/End of the game, and any breaking news.

You can directly go to any particular date to see the schedule of that day, and to checkout out which all teams will be in action at that time. You can have an overview of the venue, facts, line-up, commentary, market, head-to-head, and many more.

This app provide you many setting options, which you can use to enable notifications, change theme, font size, etc. Not only that, you can also filter competitions of your favorite teams to show on Live scores.

You can also set reminders for any game, so that you don’t miss the thrill of the game.

You can also keep an eye on FIFA ranking, tables, rounds to be played (group stage wise), top scorers, and a lot more.

TV schedule feature is inactive due to some copy right issues. Despite of that, this app is quite handy to stay updated with the recent activities in FIFA World Cup stadiums.

Use QR code below to get this FIFA app: 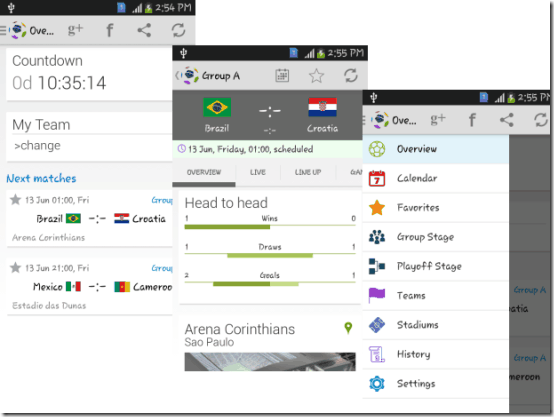 Brazil Cup 2014 is another app that lets you track FIFA World Cup LIVE. This app has the ability to provide live scores, current standings, schedules, and a lot more.

This app provides you detailed overview of the teams, as well as the groups. You can set your favorite teams and track their  information, that includes coach details, statistics, players & position info, and a lot more.

For each match, you can keep a track of live score, line-up, and much more. Like the above app, this app also lets you set reminders for the any scheduled game.

You can checkout all the venues/stadiums, on which the games are to be played. You can also have an overview on the history in which it shows top 4 teams who were qualified for the semi-finals. 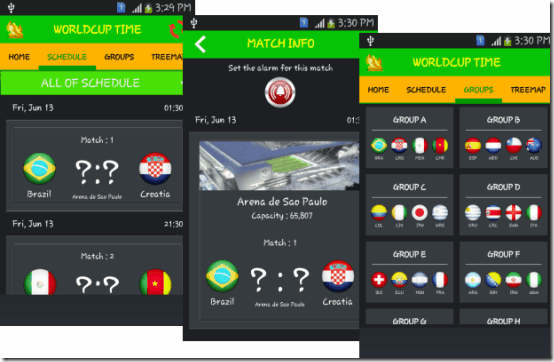 World Cup 2014 is another Android World Cup app that provides live match results to check World Cup 2014 Scores for live. It provides you schedule of each match along with the venue. It shows match info, stadium in which the match is to be held, and what is the capacity of the stadium. You can always set reminder for any of the matches, as it has the ability to remind before 30 minutes, 15 minutes, or on time, depending on your choice.

You can easily sort the matches, by history, country, today, and future.

It provides you a detailed overview of the countries included in each group. Not only that, it also lets you keep a track of the points of each groups.

For better analysis, it also provides you Tree map, on which you can get a brief idea that how teams of each group are going to play from first round to the finals. 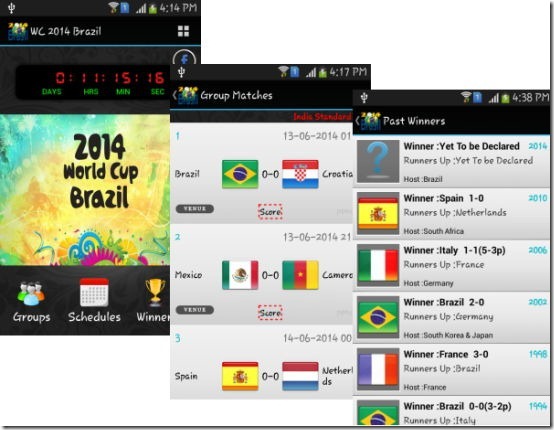 World Cup 2014 – Brazil is a simple Android app that lets you stay updated with the World Cup 2014 matches and other related activities.

This Android app gives you an overview of the groups, along with the charts, that’ll help you keep a track of won matches, draw, etc.

It provides you schedules for the matches that are to be held in future. It provides a scoreboard, where you can track live score of the match, along with the venue.

It also gives you an overview of the past winners of the World Cup. In addition to all this, it provides you WC 2014 videos and songs, as well.

Get app using QR code below: 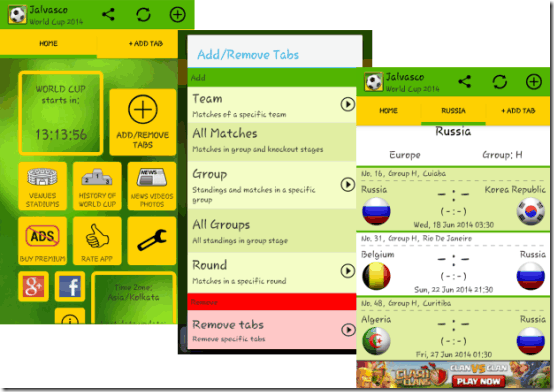 Jalvasco World Cup 2014 is another Android app on which you can check score of World Cup 2014 live. It comes with very straightforward interface, where you can see venues, news that includes photo and videos, add/ remove tabs, and more.

You can add or removes tabs for desired teams, groups as well as Rounds that includes: Group Stage, Round of 16, Semi finals, and much more. It displays venues or stadiums, where the Football matches are to be played, along with some information, photos, and map of the stadium.

It offers you preferences, where you can custom set the time zones, date types, data refresh period, and more.

Scan QR code below to get this FIFA app:

So, this is my round-up of Android apps for FIFA World Cup 2014 that you can use on your Android device to keep track of latest scores, team standings, fixtures, match schedules, etc. All these apps are completely free and will give you complete details of all the matches.