Le Dimmer is a free desktop dimmer for Windows which allows you to dim entire desktop and only leave the active window focused. This is a portable application which doesn’t require installation. As soon as it’s started it will work minimized in the system tray icon and you will notice that the entire desktop was dimmed, leaving only the whatever application was running focused.

Example of a dimmed desktop and focused application can be seen on the image below. Firefox window stands out on top of all the others, which is the whole point of dimming, to allow you to focus more on the interface of the application where you’re working, it can be anything, text editor, drawing software, image editor even pop-up windows are supported and will be focused while the rest of the desktop is dimmed. 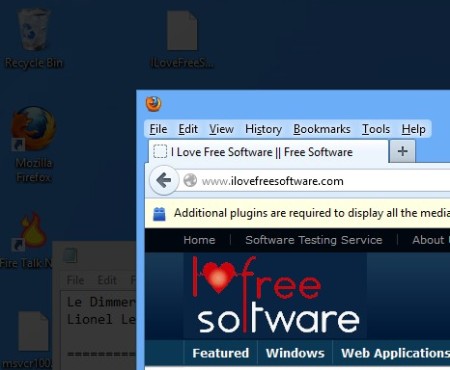 Distractions these days come in the form of everything. You can for example find yourself happily writing your school assignment in a text editor, one glance at the web browser of choice icon and you’re gone on an online bing, Facebook, YouTube, it doesn’t matter what it is, it will cost you valuable time. Dimming down everything except the windows where you’re working seriously decreases the chances of something like this happening, especially if you decide a 100% dimming down, meaning complete blackness of the desktop, but not the active window of course. Here’s how you can setup something like this with this free desktop dimming software.

Le Dimmer has no standard controls, there’s no menu where you can change how much the desktop is gonna be dimmed, everything has to be edited by changing the command with which this free desktop dimmer is activated. 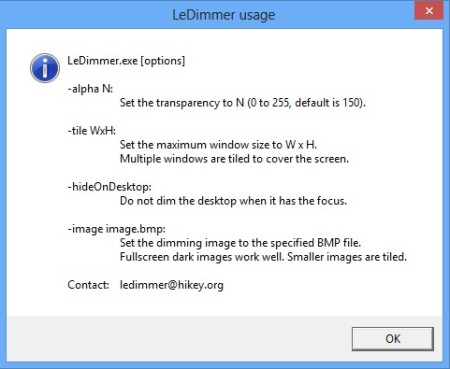 From the help window above, which you can access by right clicking on the system tray icon, we can see that in order to adjust how much the background is gonna be dimmed, you need to add this to the launcher:

Create a shortcut to the executable, or you can activate Le Dimmer from the command line while adding the alpha value at the end of it. 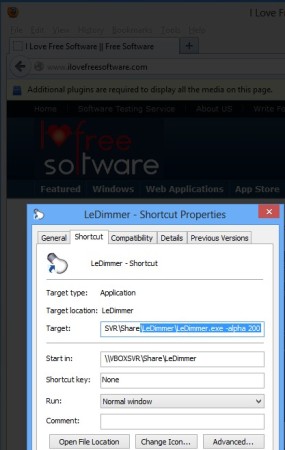 Value for the alpha, meaning how dim the desktop is gonna be, can go up to 255, which means total darkness. Other triggers can be added to the command, like the BMP image background and several others.

Changing Le Dimmer settings might be a bit unusual, but it’s not to horrific, and everything works as advertised. Entire desktop background will be dimmed, leaving on the window of the application that you’re using.