CinePaint is a free raster photo editor for Unix-like systems, built on top of GIMP, which offers pretty much the same functionality that you get from GIMP, with the exception that CinePaint offers higher image bit depth. Support for increased bit depth makes CinePaint also suitable for film frame editing, but it can also be used for everyday image editing needs.

Interface of CinePaint is divided up into separate windows, the same way that interface of GIMP was divided up before the introduction of the single window mode in newer versions. What you see on the screenshot below is the main toolbox and an image opened down below. Tools and even the icons of the toolbox are the same to the predecessor of this free raster photo editor. Next to these two windows, you also get layers and channels management window. 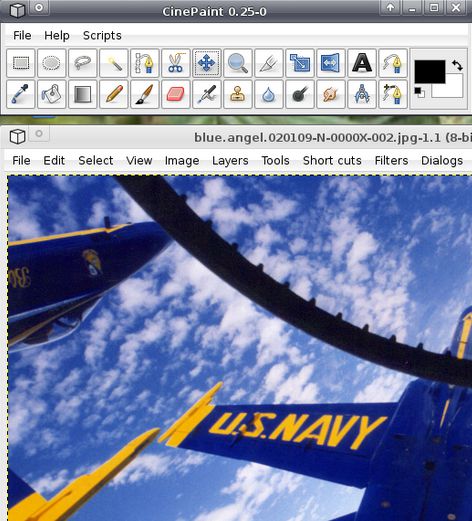 Before CinePaint can edit video frames, they first have to be extracted from videos using third party software. You can for example use VirtualDub to extract frames from videos before importing them to this free raster photo editor. CinePaint is suitable for video frame editing because of the increased photo bit depth that it has.

Photo editing with CinePaint works pretty much the same as it does in GIMP. Images that you’d like to edit can be opened by clicking on File >> Open or you can create a new canvas and start from there. 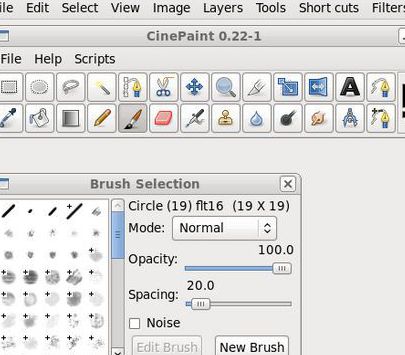 To draw with the brush, you’re gonna have to select it from the toolbox, and then select the brush shape, size, mode (dodge, dissolve, lighten, etc), spacing and all the other options that you can see from the screneshot above and then draw with your mouse. 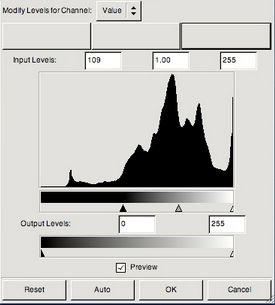 Adjustments to opened images, like levels, can be made by clicking on Image from the main menu of the main window, the one where the photo is opened. Use the sliders to make adjustments to the photos. Same thing goes for opened film frames. When you’re done, save everything and return it back into composition.

CinePaint is great for both those who aren’t very demanding and also for those who require a bit more quality from their photo editor. It’s easy to use, a bit of a drawback is that it only works on Unix-like systems, despite of the fact that there’s a Windows version, which didn’t work for us. It might take some time for you to grasp everything, we only covered the basics here. There’s resources on CinePaint website where you can learn much more about this free raster photo editor.