Oomfo makes the presentation more informative and attractive by providing options to prepare and include charts in them. Microsoft Powerpoint, by default has an inbuilt facility to add charts . But the problem is, either these are not highly resourceful or they are overused and cliche’d already. Oomfo, now provides the user with options to make interesting charts that are highly intuitive and attractive. 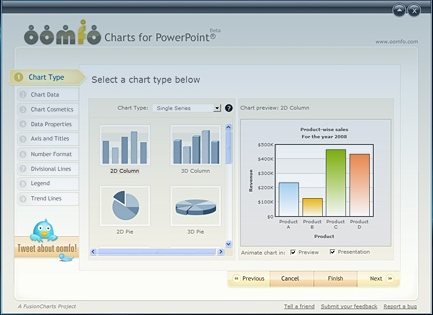 The advantage in including animated charts is that it presents the information in a dynamic way and the presenter has a higher chance of capturing the audience’s attention while doing so.

Oomfo can be downloaded for free from the website oomfo.com and the convenient feature is that, once installed , the tool add itself to the Microsoft Powerpoint as a plugin. The size of this freeware is as small as 10MB and the system requirements are minimal as well. The installation just takes a few steps and can be done in a few seconds.

Some other Powerpoint tools we reviewed earlier include Add YouTube to PowerPoint, and Free PPT to Flash Converter.

Oomfo provides the option of including animated charts and graphs in Powerpoint, which makes the presentation livelier and is also effective in grabbing the audience’s attention.

Easy to use and interactive:

These charts for Powerpoint are easy to use and are extremely interactive. Further the tool is customizable and hence can be altered to suit specific needs. This tool comes with a lot of options by default and hence formatting text, charts and display etc can be chosen as per the requirements.

A separate option called ‘Chart Cosmetics’ is available just to facelift the chart design and appearance. Separate options for creating 2-D and 3-D graphs, bar charts are available. All of these can be used effortlessly.

Accessing  Oomfo is extremely easy as well. Oomfo freeware does not run as an independent application. To use Oomfo, in order to create charts, click ‘Insert Charts ’ option in the Powerpoint toolbar. Oomfo starts running instead of the conventional chart feature and the user can now create charts of his choice and style.

With Oomfo chart creation is so simple that it is a resourceful addition to Powerpoint. This free tool can enhance any Powerpoint presentation, and is a must have for business users.