In this tutorial, I will explain how to bookmark tweets anonymously. The method explained in this tutorial will let you save tweets into different categories anonymously. Previously, we have already wrote a tutorial which demonstrated how to bookmark Tweets. But, in this method, you had to keep a URL in order to access the bookmarked tweets. So, that means that if you lost this URL, all saved tweets will be gone for good. In this method, you can simply bookmark a tweet and access all of the bookmarked tweets at the same place. The best part: you won’t have to leave Twitter to save tweets and you can save the tweets in different categories.

So, read the tutorial very end to know how to save tweets anonymously. Another good thing about this method is that you also wont have to like tweets publicly in order to see them later. So, this perfectly works if you want to bookmark tweets anonymously. 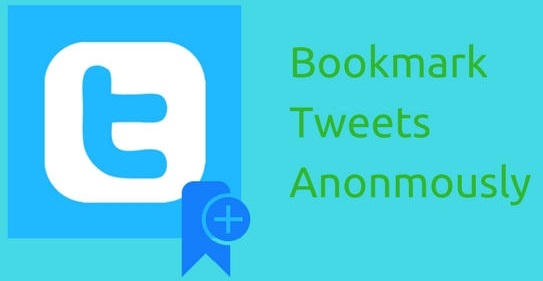 How to Bookmark Tweets Anonymously:

For it, I will use Botmark, which is a free website to save Tweets. You can simply login with your Twitter account on Botmark and use its Twitter handle to bookmark tweets.  You just have to send a tweet that you want to bookmark as a direct message to Botmark Twitter handle (@botmarker). The tweet sent as a direct message will be then saved by Botmark. You can then view all of your saved tweets by logging on to Botmark with your Twitter account.

Step 1: Open Twitter on Android or browser. Send a tweet that you want to bookmark as direct message to Botmark Twitter handle, as shown in the screenshot below. You can specify any hash tag in the message to create a category on Botmark and save that tweet in that category. 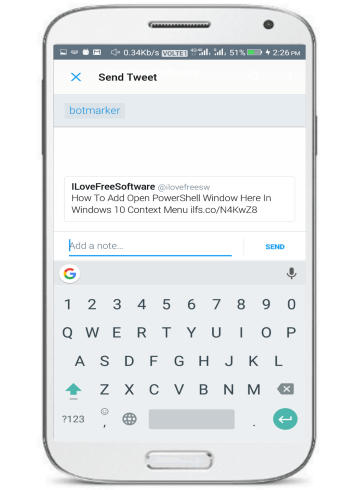 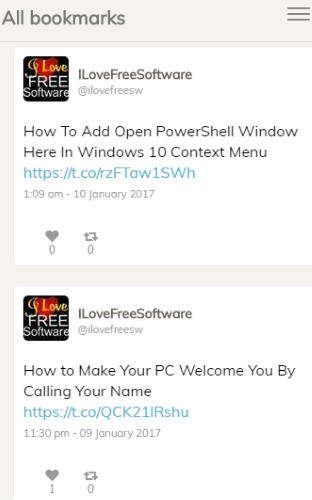 In this way you can bookmark as many tweets anonymously (without liking tweets) without ever leaving Twitter and read them later from a single place.

This tutorial explains how to bookmark tweets anonymously. The method is quite simple, which also lets you bookmark Tweets in different categories. So, if you want to bookmark or save a tweet anonymously, then this method will let you do that with ease.