Here’s a list of 3 Text expander extensions for Chrome. A Text expander extension will let you setup a canned speech type of text snippets which can be easily added into emails, text inputs, and comment boxes using keyboard hotkeys and triggers. This can saves a lot of time if you’re constantly retyping chunks of text in email replies, or when writing text online. Let’s see how exactly it is that these extensions work.

Auto Text Expander is a highly customizable text expander extension for Chrome that lets you setup unlimited number of text snippets with special triggers assigned to them, like the one in the screenshot down below. 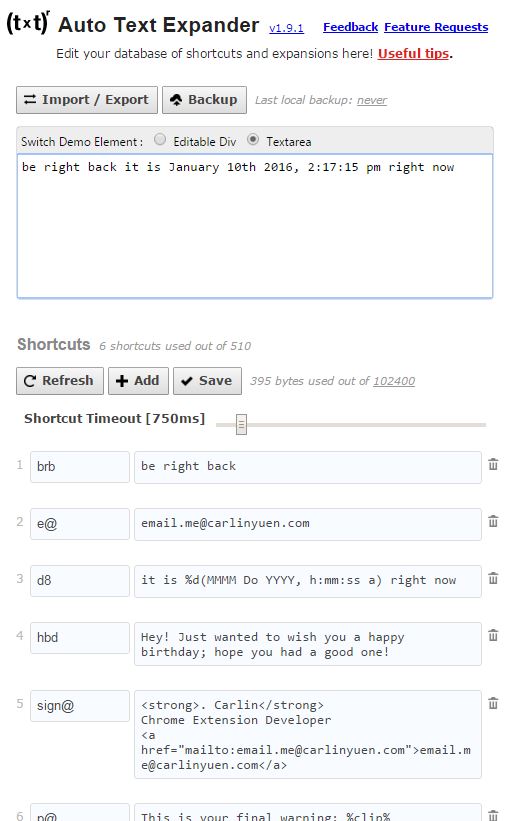 This is the default setup with some basic snippets, like the one for brb. The way that the extension works is by replacing the triggers with actual text snippets assigned to them once a keyboard hotkey is pressed. For example if you typed in “brb” in a text input box on a website it would automatically be transformed into “be right back” after hitting Space. Same thing goes for every other trigger/snippet combo that’s setup in the extension settings.

Also have a look at 5 Google Chrome Extensions To Annotate Text.

ProKeys has a large selection of settings that can be tweaked, but everything works just like it does in Auto Text Expander. Left click on the top right corner opens up the trigger/snippet manager. Here new triggers and snippets can be added. 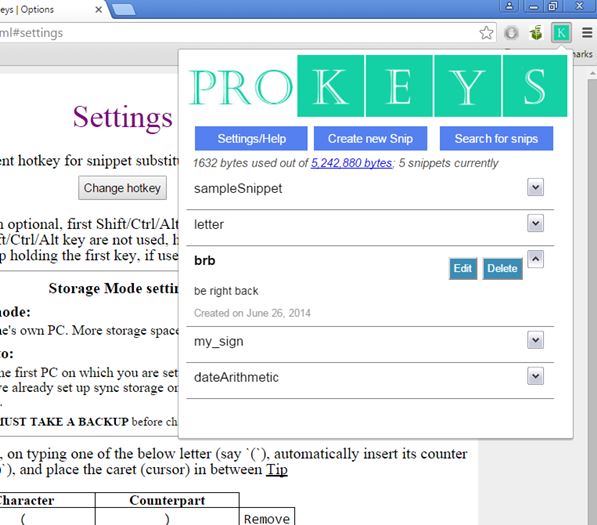 Extension settings is where keyboard hotkeys for activating the triggers can be setup. By default it’s Ctrl+Space. Helpers like auto-insert of closing brackets ), ], } and quote marks ” is also included. Sites where you don’t want the triggers to work can be added to a blacklist, which disables them on those websites. Setup triggers/snippets can be exported/backed up as TXT and then imported elsewhere/restored.

Popchrom isn’t as advanced as the two previously mentioned text expander extensions for Chrome are. Open up extension settings and you’ll see that you’ll only be able to configure triggers/snippets and keyboard hotkeys. 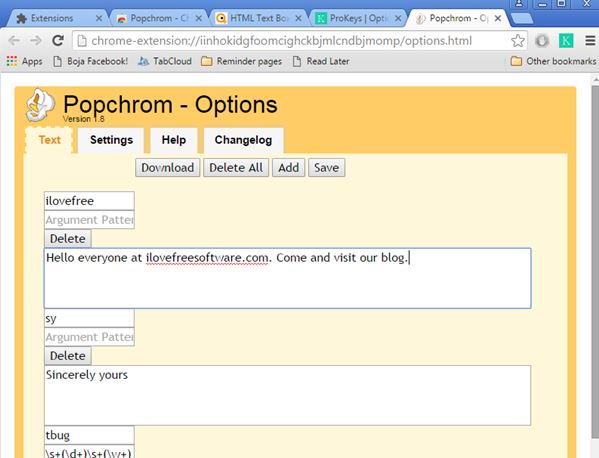 By default, the keyboard hotkey that changes triggers into snippets of text assigned to them is Ctrl+Space, just like in ProKeys. On the example on the image above, I setup the word “ilovefree” as a trigger to add the accompanying sentences every time “ilovefree” is typed into a text box and Ctrl+Space hit afterwards. Note that I had some problems getting the extension to work on some input boxes (mainly those with included HTML editors). It might work for you, but then it again it might not. In case of problems use one of the other two text expander extensions that I covered.

Also have a look at 5 Text Highlighting Extensions For Chrome.

Out of the 3 text expander extensions from the list above, the two that I liked the most and worked the best are Auto Text Expander and ProKeys. Auto Text Expander is easier to setup, so use it if you don’t want the hassle but also the advanced functionalities that ProKeys has to offer. Leave a comment down below and tell me how it went for you with these extensions.