Here’s a list of 3 Gmail batch reply extensions for Chrome which allow you to reply to multiple emails at once. Replying to multiple emails from the Gmail inbox isn’t possible. The option to reply to an email is only available after an email is opened. What the extensions from the list down below allow you to do is they make it possible to put check marks next to emails in the Gmail inbox and then they add a new “reply to all” button to the Gmail interface so that addresses of all the selected emails are put into the “Bcc” field of the reply emails that you create.

Let’s dig in to see how exactly it is that all this works.

Batch Reply for GMail by mjbauer95 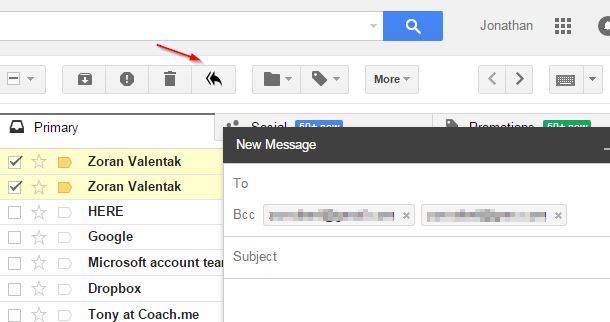 Batch Reply for GMail works exactly how I described it in the introduction. First you need to make a selection of all the emails to which you’d like to send replies. This is done by putting check marks in front of them.

Once you’ve done that, notice on the image above that next to the usual Gmail buttons there’s now a new additional button that’s available. This is the button for starting the batch reply process. It will open up in a “New message” window and it won’t be any different from a standard Gmail message. One thing that is going to be different is that the addresses of all the emails that you selected are going to be added to the “Bcc” field of the new email.

“To” field is going to be empty, and you should leave it empty because the recipients of emails are going to see “undisclosed recipient” in their “To” field, and only their own email in the “Bcc” field when they receive batch emails that you sent. No text is quoted in the reply, since multiple emails are selected, but you can added quoted text message in the email manually if you want to see it there.

Get Batch Reply for GMail by mjbauer95.

Also, have a look at Reply To Emails In Batch Using Batch Reply For Gmail.

Batch Reply for Gmail™ by Elad

Batch Reply for Gmail™ by Elad works similarly to how the previously mentioned extension works. Just make a selection of all the emails to which you’d like to reply and their addresses are going to be added to the “Bcc” field of the new email that you start composing after clicking on the reply to all button.

One difference between these two Gmail batch reply extensions is that this one opens up the new email window as an actual standalone window, instead of just a pop out window at the bottom of the screen, how Gmail usually opens up the compose new mail window.

Get Batch Reply for Gmail™ by Elad. 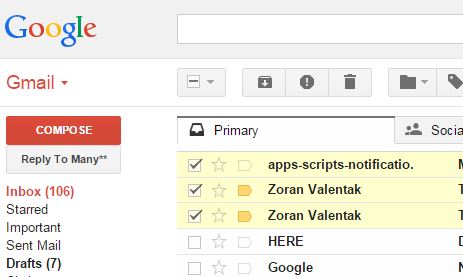 Reply To Many is an app which will first require you to give it permission to access your Gmail account, which is something that the two previously mentioned Gmail batch reply extensions didn’t require.

Once the permissions are given, button for batch reply is going to be added just underneath the Compose button in the left sidebar. Make a selection of all the emails that you want to reply at once, click the button and the rest is pretty much the same as it is with the others.

Get Reply To Many**.

Also have a look at How To Send Same Reply To Many Emails Together in Gmail.

I suggest that you use one of the first two extensions from the list. They have similar names, and they are pretty similar in functionality actually. They worked for me, let me know how it worked for you in comments down below.