Are you looking for a way to create animations with your Google Photos, and also without the use of any third-party apps? If the answer is “Yes”, then my friend I am going to explain a simple method for doing the same. This tutorial is all about how to create animations or GIFs with Google Photos on Android. The best part is that you don’t have to use any third-party animation or GIF maker apps like Gif creator, Fixie GIF Camera, and many more.

The method that I am going to explain is actually an easter egg of your built-in Google Photos app on Android. The built-in Photos app lets you create animations using your photos on Google, with just a few taps. The only catch is that the animations or GIFs which you create will not be customizable.

All you have to do is select multiple photos, and the animation gets automatically created. If you wish to add a video along with the photos, then you can add the first frame of the video only. After you’re done with creating animations, you can either save it as a GIF file or share it with others using Hangouts, etc.

How to Create Animations or GIFs with Google Photos:

Step 1: Open the built-in Google Photos app on your Android device. You will see all your Google Photos on the main screen, and a “+” at the top of the screen.

Step 2: Tap the “+” icon at the top and choose the “Animation” option from the popup list. 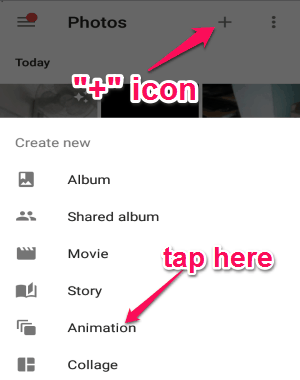 Step 3: After that, you can scroll and explore all your Google photos, and select the ones you want to include in the animation. It lets you select multiple photos at once, and the limit of the photos will be up to 50 photos maximum. You can also select videos, but only the first frame of the videos gets included in the animation. 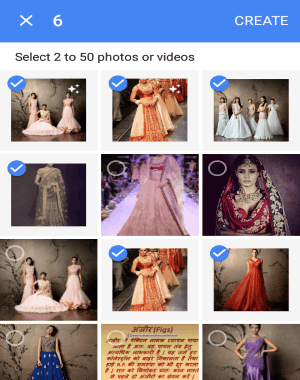 Step 4: When you’re done selecting your favourite photos, simply tap the “Create” option at the top. As soon you tap the create option, the app starts processing your photos and turns them into a GIF or animation file automatically.

Step 5: After the animation is created, you will be able to see it with your other Google photos. To make it easier for you to recognize the animation files in the library, it stamps a small animation icon at the corner of the file. 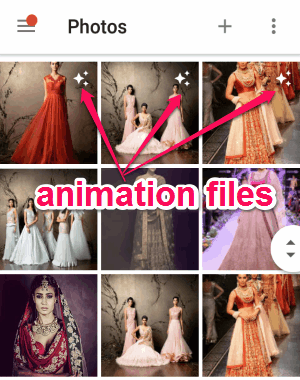 Step 5: As I mentioned earlier, you can either add the animations to your photo albums, save it to your device, or share with your friends.

Honestly, I think if you want top create a simple GIF from your Google photos, then instead of downloading heavy apps, you can try this simple tutorial. Select up to 50 photos at once and turn them into a visually appealing moving picture.