The app is wonderfully easy and allows you to share your creations with friends and family or the whole world. The interface of Gif creator for Android is really simple to use and makes the process of making animated Gif fun and easy. This is a great free app for making animated GIF on Android. Capture yourself or things around you with with this app. Just capture the movement and leave the rest to this Gif creator app for Android.

Here is a sample animated gif I created using this app:

Features of Gif creator for Android:

How to Create Animated Gif on Android:

Install the Gif creator onto your device from the link given at the end of this review. When you open up the app, you will have the controls as shown below. The main screen of the app gives four options. These include Gif using camera, Gif using pictures, My Gifs, and Top Gifs. We will go through each of these options further in the article. 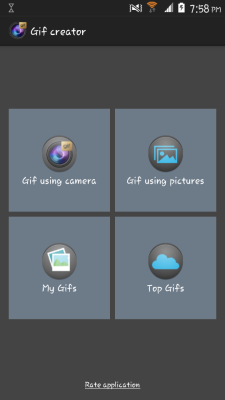 To create Gif animations using the device’s camera, click on the ‘Gif using camera’ option in the main screen. The app lets you do recording of up to 30 seconds. It also comes with options to toggle flashlight and switch to front camera.

When you start the recording, you will have the option as shown in the second screenshot below. When done, click on the stop button from the screen and then you will have the clip along with saving options as seen in third screenshot below. Name the gif, choose he frames per second, and then click ‘save to card’ to save the image or you can get the URL or you can also share the image from here. 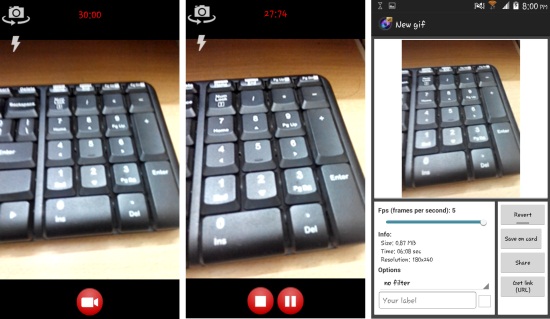 To create Gif using the pictures on your device, click on the ‘Gif using picture’ button and you will have the interface as seen below in the first screenshot below. Simply add images one by one and click on the next button and Gif creator for Android will bring up the interface as seen in the second screenshot below. This app will then create an animated gif from those photos. 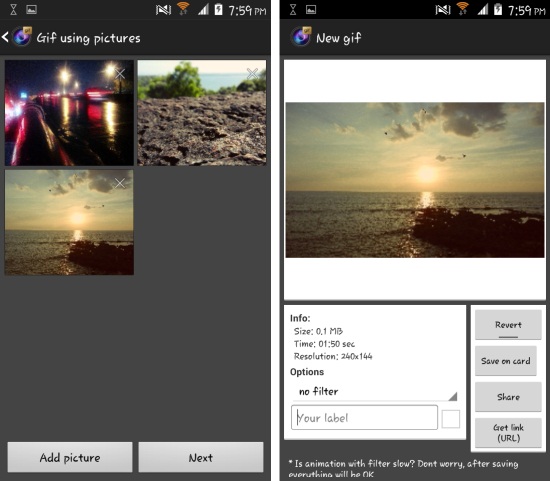 Some other gif creators we reviewed earlier include InstaGiffer and Beneton Movie GIF.

Click on the My Gif to view all the animations which you have created. Gif creator for Android lets you to share your creations with the world and discover Gifs created by other. Simply click on the ‘Top Gifs’ from the main screen and you will have the top Gifs as seen below. 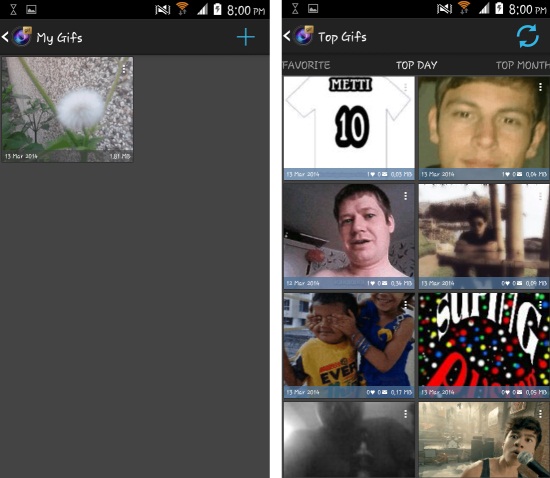 Gif creator for Android is a brilliant app which allows you to make short animated Gif which ease. It is a great way of capturing funny things, being creative or capturing special movements. I am pretty happy with the app as it worked will and did not hang or crash even once.

Get Gif Creator for Android here or scan the QR code below: 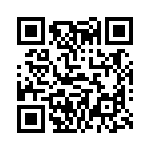