The photo effects offered by the app looks genuine when added to any photo on Android. After adding effects to the photo with this app, I am sure that you will not feel that the effects are artificial. All the effects added to the photo look highly natural on your Android screen.

The very appreciating part of this Android camera app is its real-time effects on Android. The app purely uses your Android phone’s camera to take a photo and then provide multiple effects to that photo in real-time.

Cymera is one of the latest Android camera app that I have added in my favorite app list on my Android phone. Most of my friends seem to be very happy with this app, as I have edited their photo and added extra beauty to their photo on Android.

The app provides ultimate photo effects which you can easily apply on any photo clicked by your Android’s camera. All the effects in the app are specially designed to add extra beauty to the photo and then share it with your friends and family. 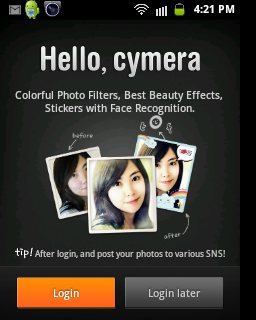 Also, check Camera 360 app for Android reviewed by us.

Some Key Features Of This Android Camera App:

Check out Camera Fun app for Android reviewed by us.

How To Install Cymera App On Android:

The free Cymera app will be automatically installed. Just install this smart Android camera app. Take your Android photo shop anywhere you go and make your friends and others happy by adding multiple effects to their photos.