Rubba Rabbit is a Windows 8 Bunny Game. In this game, you have to run, jump, and collect fruits and veggies that are present in the level. You have to play the game as a bunny. Compete against time, as a timer will set off as soon as the level starts.

The Game is suitable for all age groups. It has a gradually increasing difficulty level. 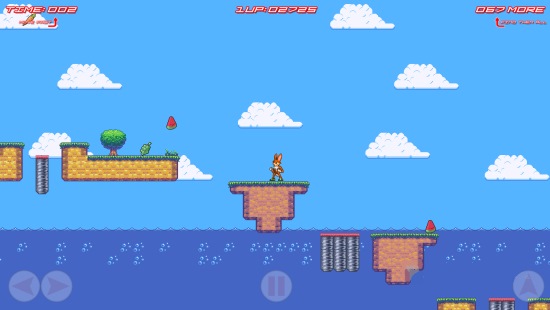 This game is freely available in the Games category of the Windows Store.

As you get to the main screen of the game after launching it, the game will begin. Now, your main aim during the game is to collect all the fruits and veggies that are available in that level. Without collecting all of them, you won’t be able to get to the next level. Now, what is really interesting about this game is that as long as the timer does not reach zero, and supposedly you are not able to collect all the fruits and veggies that are present in that level, you won’t lost the game, and the game would restart from that point again. 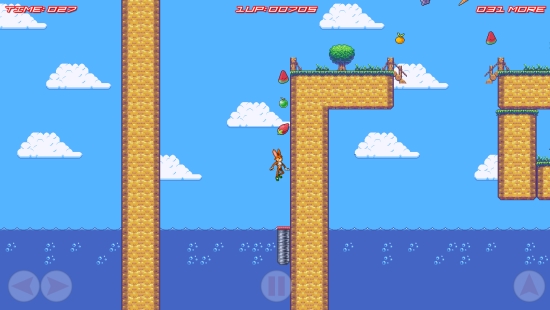 As you begin the Game, the time will appear to you on the upper left side of the game area. That timer will eventually reach zero. Before it reaches zero, be sure that you have collected all the fruits and vegetables from that level, or you will lose the game. In addition to that, you can keep track of the number of collectibles from the upper right side.

Your score shall be displayed on the upper middle side of the game area.

Controls of this Windows 8 Bunny Game:

The controls of the game are really easy. You just have to use the right and left arrow keys to move forward and backward respectively. Use the up arrow to jump. In order to reach some of the fruits and veggies that are available in the level, you need to jump higher. But whenever you are in such kind of situation, be sure about looking around, as a platform may be present, jumping upon which you will be bounced higher into the air.

Carefully use your strategy and skills to carefully find a combination of these control keys to reach all fruits ad veggies that are present. In addition to that, you also have to remember that without collecting all the collectibles for a level, if you accidently jump into water, your progress would be lost and the game would restart with the timer starting from the lost count.

The game is great for all age groups, and it will surely keep you engaged, because as you are able to clear a level, you would get to the next level having a greater level of difficulty.

Going by my experience with the game, I would like to conclude that this Windows 8 Bunny Game will turn out to be quite fun and addictive. The small time interval surely is gonna increase your involvement. Try it for sure, and share your experience with us.